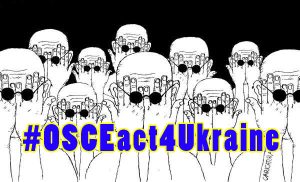 On 4 and 5 December 2014 the 21st Meeting of the Ministerial Council of the OSCE in Basel, Switzerland, will be held. Let’s support Ukraine suffering from an overt Russian invasion that OSCE observers seem not to notice and demand that #OSCEact4Ukraine!
List of tweets coming later. The event’s official hashtag is #OSCEMC14

-only 2 checkpoints are monitored on the Russian-Ukrainian border
– NATO officials say that “multiple columns of” Russian tanks, artillery, and antiaircraft units have crossed from Russia into separatist-controlled territory since November 10; meanwhile, the OSCE reports “unidentified” columns of military vehicles crossing the border
-OSCE vehicles have been used by separatist forces
-OSCE has waited months to deploy drones to monitor the border only to withdraw them after several weeks due to Russian electronic attacks
-OSCE has been accused of revealing the locations of Ukrainian troops to Russian forces during the conflict
-Russian OSCE observers may be directly coordinating separatist artillery strikes on Ukrainian positions
-what are Russian observers doing in the observation mission anyway?!
-OSCE observers have not inspected the (r)aid convoys coming in from Russia
-Serbia will be presiding in OSCE in 2015, meaning more support for Putin
-what about #CrimeaisUkraine and violation of human rights in occupied Crimea?

The Ministerial Council is the central decision-making and governing body of the OSCE. The meeting, held annually, provides the foreign ministers of the 57 OSCE participating States an opportunity to review and assess the Organization’s activities during the past year and offer national viewpoints on security matters.