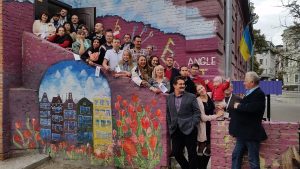 We define social intermediary as an expert on preparation and organization of inclusive multi-stakeholder social dialogues in local communities in zones of ongoing or potential violent conflicts.

The main problem we address with our trainings is the absence of social practices for conflict transformation via non-violent and non-repressive methods and  for planning the common future in Ukraine.

The need for this training is caused by the ongoing Russian military and informational aggression against Ukraine.

135 people received certificates of completion of the course so far.

The project started within the Ukrainian Peacebuilding School framework.

We provide trainings and workshops on:

The School program is original and has no analogues in the world.

They created new practices of dialogues and joint activities on community security and sustainable development, integration of internally displaced persons and displaced universities into local communities, psychological rehabilitation of victims of war, peacebuilding education in local communities, cooperation between civil and military.

Our approach to dialogue practices

Examples of practical outcomes of dialogues organized by alumni

The main objective of the project is to establish the social intermediary as an innovative institution in Ukraine.

Trainings developed within the School are included into educational programs of universities as extracurricular activities.

Synergy with Ministry of Education and Science – regular communication aimed at developing strategic plans to include the basics techniques of social intermediation in formal education.

Relations with the Ministry of Temporary Occupied Territories and Internally Displaced Persons of Ukraine are focused the implementation of the Social Modelling Games and the Classifier of the Social Intermediary Profession.

The Ukrainian Peacebuilding School was initially supported by the British Embassy in Kyiv in 2014-2016.

In 2016-2017 the project was supported by the International Renaissance Foundation.

In 2018-2020 the School was a part of the Civil Peace Service program: “Empowerment of civil society for non-violent conflict transformation with state actors – Project-line ‘Platform for (successful) Nonviolent Activism’”. The project is funded by K. Wustrow – Centre for Training and Networking in Nonviolent Action, within the framework of Civil Peace Service, a program of Germany’s Federal Ministry for Economic Cooperation and Development (BMZ).

We are grateful to all our donors!