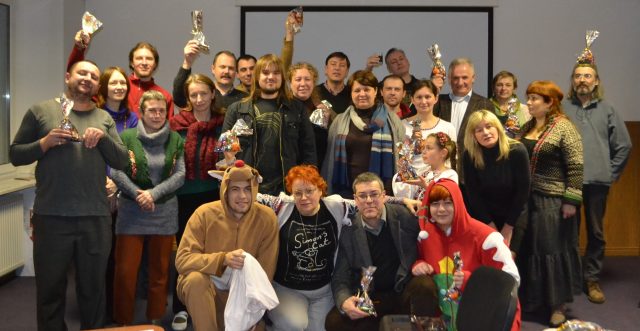 33% of NGO members are celebrating 15 years of Maidan. December 19, 2015. Somewhere in the forest. Consensus decision of this General Assembly defined societal security as a main focus of MMIC activities.

Maidan Monitoring Information Center is a non-government non-profit civic organization that cares for societal security in Ukraine, which is achieved through public dialogue, improving the culture of communication and reducing the level of violence in society.

The organization was officially registered on November 23, 2012, however our story starts on December 19, 2000 by the publication of this website on the Internet, which was originally named “Maidan”.

“Maidan” is the term, which we had consciously and purposefully introduced into political vocabulary.

The Ukraine we want to live in is a free country of free people with a protected individual liberty and protected rights, in which the state can intervene minimally, only in exceptional cases, which are listed exclusively and legally.

In the future we see Secure Ukraine as a country, where:

And our mission is to motivate people to learn and pursue their vision.

The organization unites 50+ members who live in 12 regions of Ukraine including Crimea, in Poland, the Czech Republic, Slovenia, the USA and Canada and 750+ volunteers all over Ukraine and the world.

We contributed to the development and adoption of the laws:

The draft of the law “On the protection of Ukrainian statehood from the manifestations of collaborationism” was officially submitted to the Parliament, but not adopted. The work is underway to reintroduce it.

How did we start doing it?

Since 2014, we have been helping people, organizations and institutions counter specific information operations to preserve their integrity.

Since 2018, together with partners from the Czech Republic, Slovakia and Poland, we have organized cyber security trainings for the Donetsk and Luhansk regions.

Since 2020, to counter Russian propaganda we have developed and implement the technology of creating information self-help groups.

Since 2014, we have been training practitioners in the management of socio-political conflicts in Ukraine using our own methodology, including the practices of social transformations of Poland, the Czech Republic, Germany and Israel.

Since 2014, we have been organizing, discussing and broadcasting online popular science lectures in Kharkiv from Kharkiv, and not only, scientists and researchers from different fields of science and technology. You can watch the recordings of the lectures  on our Youtube channel (link to a playlist)

Study and transfer of Polish experience of public finance control in cooperation with the Supreme Audit Chamber of Poland (NIK.gov.pl) – under the cooperation agreement of October 24, 2014.

22 members and partners of our organization received certificates of successful completion of public finance audit courses in the NIK training center in Poland in 2015-2017. NIK experts participated in our educational projects in Ukraine in 2014-2019.

A detailed report on one of these courses organized by MMIC together with NIK is here (in Ukrainian) Anti-development interest groups and systemic pathologies – MM and NIK seminar in Poland.

We consider the monitoring and audit of public finances as a powerful tool for building a Secure Ukraine, increasing trust and responsibility in Ukrainian society.

Since 2018, parents, together with their children, communicate, study, develop, play and relax in the Ukrainian-speaking environment in Kharkiv.

Since 2014, together with our partners and alumni, we have been organizing interaction between civil society organizations, local and state government, business, Ukrainian and international experts in conflict management and human capacity development in local communities of Ukraine.

IN 2018-2020, we had been creating and disseminating good practices for voluntary cooperation for community security in order to move closer to the EU’s life quality standards and NATO’s civilian protection policy under the Platform for Nonviolent Activism together with Kurve Wustrow.

Our History in Brief

Our Statute in English MMIC_statute_eng

The “Maidan” website was founded as an official information source of the Ukraine without Kuchma protest action in December 2000. Since then it existed as the pulse of nonviolent civic resistance in Ukraine.

In 2005 thru the open collaborative consensual procedure dozens of maidan contributors authored via website a fundamental policy paper of Maidan Alliance – the Maidan Memorandum– the only public policy paper drafted as an outcome of Orange Revolution. The Memorandum contains a list of practical tasks aimed at overcoming post-totalitarianism in Ukraine, affirming the principle that “the authorities answer to the people, society exerts control over the authorities”, defence, affirmation and broadening of rights and freedoms, and the rule of law.

Since May 2014 Maidan website informs mostly of current activities of Maidan Monitoring Information Center and serves as an official website of our NGO.

We focus on monitoring and affirming the right to access the information about the government activities as a basic human right .

We have co-authored (with Kharkiv Humar Rights Protection Group) annual report “Human rights in Kharkiv region” (2005)  (funded by National Endowment for Democracy and IRF) and the chapter on Freedom of Peaceful Assembly in the 2012 and 2013 Annual Report “Human Rights in Ukraine”.