Until late 18th century, the territory of Donbas was a “wild field” – a territory with no life where neither Tartar hordes, Don Cossacks, Nogai nor anyone else – except for Zaporizhian Cossacks – did not settle for good. The wild Donbas field attracted the Cossacks with its absence of a state and governors. The hands of Moscow tsars, Polish kings, or Imperial Families of Turkey could not reach this area. Actually, Zaporizhian Hetmans themselves could hardly control where and how the Cossacks, who had the courage to settle in the healing steppe, lived. Zaporizhian Cossacks built their zymovniks in hidden places at estuaries and lakes. Zymovnik (which came from Ukrainian zyma (winter)) means the time when every Cossack, who did not live permanently in the camp on the Dnieper (in Sich), could build a fenced yard for 3-4 families to relax in winter when no military campaigns were run. Some historical events destroyed zymovniks, others made them grow into small villages and even towns. A small Ukrainian town of Krasny Lyman in Northern Donbas dates back to those days when the Cossacks built their first zymovniks in the area. As time passed, the area got its own name – Lyman, that is, a beautiful place with a lot of lakes. Many lakes are still here to this day.

The uprising headed by Bohdan Khmelnytsky and relocation of thousands of Cossack families to the left bank of the Dnieper led to the formation of Slobozhanshchina (Sloboda Ukraine), the territory of Cossack structures and de facto independent administration on the territory of modern Kharkiv, Poltava, Sumy, Donetsk, Lugansk, Kursk (Russia) and Voronezh (Russia) regions. Then, being in the south of Slobozhanshchina, the strategic role of Krasny Lyman changed. It became an important defensive element near Tor Fortress (now Slovyansk). The date of the village foundation by Izyumsky Cossack Regiment in 1667 is associated with this status.

Actually, the sloboda of Lyman got its present name – Krasny Lyman – only in 1925, when local Communist leaders added Krasny (Red) to Lyman to make it sound more Communist. The modern economy of Krasny Lyman is based on both traditional Ukrainian agriculture and rail transportations caused by industrialization in Donbas. No large iron or coal deposits were ever found around the town and the district, which probably saved the land from large crowds of various ethnic origins and cultures. Many of these people were Russians who came in echelons to work at newly-built factories, mines and mills, and to populate Donbas; the whole thing was initiated by communist leaders. In fact, communists tried to build Donbas as an exemplary model of a communist society. De-nationalization (actually, anti-Ukrainian policy), struggle with religion, elimination of creative farmers (kulaks, wealthy peasants) as the class – the vast majority of them being wealthy Ukrainians (kurkuls) were accompanied with immigration of ethnic Russians who arrived to Donbas from the Central and Northern Russia. Collectivization, famine of 1932-33, World War II, post-war famine (1946) and the power of communists that continued until 1991 brought much grief and loss of self-identity to people in Eastern Ukraine as a whole and residents of Krasny Lyman district in particular.

As for the whole Ukraine, recent history of Krasny Lyman district started in 1991, when the country gained independence. As a typical provincial town, Krasny Lyman could have remained unknown to the public if it were not for Ukraine-Russia military confrontation. The “North Gate of Donbass”, as Krasny Lyman is sometimes called, first got into newspapers on April 12, 2014 when terrorists attempted to capture the local police station. In the morning, about 30 armed terrorists arrived to the town and required from the local police the surrender of their weapons. In that way, terrorists had seized several police stations in Slovyansk, Kramatorsk and other towns in the East. However, in Krasny Lyman, terrorists probably for the first time faced the reluctance of the local community to join them. It was in Krasny Lyman where the police did not let the terrorists into the police station (though later some local police officers collaborated with the so-called Donetsk People’s Republic). On that day the local community, both opponents and supporters of separatists gathered near the town police station. The Mayor Leonid Perebeynis took the initiative. During the negotiations with the armed and aggressive crowd of Russian fighters they agreed that the separatists would leave the city. In fact, Krasny Lyman was the first town to reject separatists with the Ukrainian blue-and-yellow flag flying over the Town Hall. However, not for a long time. Having recovered from the unexpected repulse, separatists from Slovyansk came back some days later to capture the City Hall. Major events were held on April 30, when about 40 armed terrorists with AK-47 broke into the session of the City Council, took MPs hostage at gunpoint and forced the town administration to vote and recognize the independence of “Donetsk People’s Republic”.

About five block posts were built in the town and around it; the terrorists with their local supporters tried to control road traffic looking for mysterious U.S. State Department agents.

Hatred of Russian terrorists to all the Ukrainian-related issues and people was confirmed with the murder of Ukrainian activists in the eastern Ukraine. Unfortunately, Krasny Lyman was not an exception: on May 8, in the woods of Luhansk Oblast the police found the body of Valery Salo, the head of Krasnolymanska Prosvita Cultural Society, who was earlier stolen by Russian terrorists. His body with numerous traces of tortures was hidden in the luggage compartment of Valery’s own car. 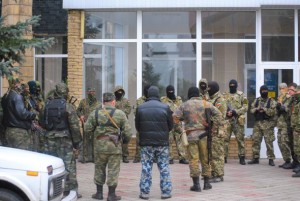 Luckily, great battles bypassed Krasny Lyman, despite its close location to Slovyansk. Relevant military events included a Ukrainian military helicopter shot down near a block post on a road to Slovyansk on May 5th.

As elsewhere in Donbas, on May 11th the terrorists held the “referendum” without any legal basis, at gunpoint. In Krasny Lyman, the majority of population refused to go to so-called polls.

On June 3rd, the forces of Anti-Terrorist Operation started the offensive, having requested the terrorists to lay down their arms. Yet, special leaflets warned the civilians about the beginning of hostilities in advance. By mid-June 3rd, the southern and central part of the town had been cleaned up. In the evening Oleksandr Turchynov, the Acting President of Ukraine at that time, said that the Ukrainian authorities regained control of Krasny Lyman. “Cleaning” of the town continued during June 4th and 5th, houses and individuals were searched to identify gunmen. The terrorists and their accomplices were arrested; local residents helped the Ukrainian Forces in their identification.

On June 5th, the Ukrainian flag re-appeared above the Town Hall and police station. A special police unit “Artemivsk” together with the composite police battalion and local officers who are loyal to their oath of allegiance to Ukraine began patrolling and day-to-day service. On the same day, Konstantin Mateychenko, Lieutenant Colonel, was appointed the Head of Krasny Lyman District State Administration by the Decree of the President of Ukraine.

As a result of airstrikes by Ukrainian Air Forces, the railway station, the railroad bed and the hospital where terrorists concentrated their forces were damaged; however, the structures can be easily restored. Due to coordinated and professional actions of the Ukrainian army there were no civilian casualties. Actually, the correct behavior of Ukrainian soldiers was confirmed even by local supporters of terrorists. Now the situation in the town is controlled; the damaged buildings are being repaired. As a consequence of the historical events, Krasny Lyman which essentially belongs to South Slobozhanshchina but in fact is the “North Gate of Donbas”, has reached a crisis point in understanding its self-identification. The population of Krasny Lyman – those who are for Ukraine as well as those who support the so-called “Donetsk People’s Republic” – probably want the same thing – peace throughout their land. As this brief military clash in the town quickly stopped even the most avid supporters of military actions. At the moment, the destiny of the population of Krasny Lyman as well as of the entire Ukrainian East depends on military operations on the territory, and on politicians in Kiev, Brussels, Washington and also in Moscow, of course.