Ukraine is today not only a country that defends the rest of Europe. It is also a country whose experience with Russian hybrid aggression can be instructive for the other states of the European Union.

For both the Czech Republic and the EU, Ukrainian experience is important because the methods that were and are being used by Russia against Ukraine are similar to those used by Russia in other countries. In Ukraine, the Kremlin had the opportunity, given the circumstances and destabilization caused by the Revolution of Dignity (Majdan’s civil protests), to take a few steps more than it could do in the rest of Europe, and its activity became more visible. In other countries waiting for the opportunity. If such an opportunity occurs, it will certainly be used.

Russian intelligence services in the first place corrupt and acquire compromising materials for business and political stakeholders. Just as the former Ukrainian President V. Yanukovych was used, some politicians are being used in the Czech Republic and other EU countries. On the example of Yanukovych, we see that the level of cooperation and the promotion of the interest of foreign power in Ukraine was directly proportional to the importance of the position Yanukovych held. This cooperation became important in 2010 when the head of the Donetsk clan V. Yanukovych became president and the mafia de facto took control of the whole state. The Kremlin, as in many other cases, has taken advantage of Yanukovych’s undying desire for wealth and luxury. Yanukovych’s government has continued to be in the Ukrainian state administration, and this time very massively,

All Russian aggression in Ukraine is the culmination of the long-term work of the Kremlin, which includes information war, cyber attacks, intelligence gathering, deploying security and political structures of the adversary with the help of collaborators, agents, and corruption. Some of them went to the side of the Russian occupation forces only during the conflict (Alexandr Zacharchenko, the high representative of the self-proclaimed “Donetsk People’s Republic”), but others have shown prominent cooperation with the Kremlin for many years (Igor Plotnicki, former High Representative of the so-called “Luhan People’s Republic”).

Similarly, the Kremlin is also active in the EU in the long term and systematically. Persons of interest got supported financially and informally in their careers, the others got hurt. The Czech Republic is not an exception in this case. Here, the Russians also played high political games. On the basis of Ukrainian experience, the above-standard relations of the current President of the Czech Republic M. Zeman and his immediate vicinity with the Kremlin are to be considered high security risk. 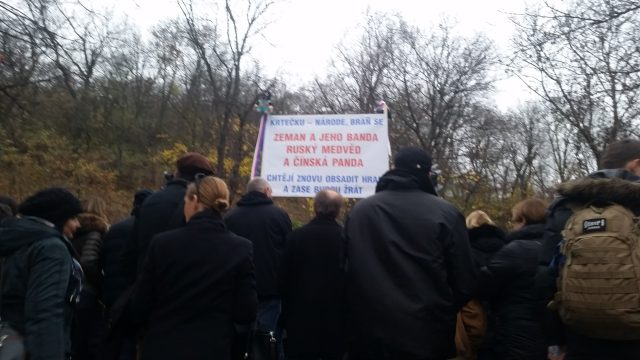 A demonstration in Prague, November 17, 2017. Slogan “Zeman and his band – Russian bear and Chinese panda”. Photo by Nataliya Zubar

The great concern among the experts has prompted M. Zeman’s intelligence support ahead of the upcoming presidential elections in the Czech Republic. On the state-controlled Russian web site Zvezda TV appeared an article titled: ” Czechoslovakia should be grateful to the USSR for 1968: History of the Prague Spring“At the time when the President of the Czech Republic was visiting Russia. An ideal opportunity to show Zeman as a statesman who defends Czech national interests. The year 1968 is not an important topic today in Russia – it can be used as part of the promotion of more important topics. In the next part of the scenario, however, the Kremlin did not exceed its own shadow, and for Russia a seemingly humiliating game with apology was selected by Medvedev, not V. Putin, according to the well-established scenario. Even though Protocol President Vladimir Putin should be apologizing to President Zeman. It was probably also possible for the infamous operation to continue in the Czech Republic in the form of relatively disrespectful subtitles: It is not so obvious: Zeman has snatched Medvedev’s head for an article about 1968. He stoned and screamed … (November 22, 2017, New Republic, Parlement Sheet) [1]or: Milos Zeman quickly and harshly put the Russian Prime Minister Medvedev in a licking article on occupation ! [2]

However, the protocol does not take into account even more important matters. In May 2015, V. Putin and M. Zeman met in Moscow. Zeman was accompanied by Chancellor Vratislav Mynář and advisor Martin Nejedlý. At these top-level negotiations, with Vladimir Putin being accompanied by Foreign Minister Sergei Lavrov and foreign policy adviser Yuri Ušakov, there was also no Czech Ambassador in Russia, Vladimir Remek – Hero of the Soviet Union! [3]

According to experts, this is a completely non-standard procedure. The reason could be that the meeting also discussed things that would not fit in the reports that ambassadors usually send out of such meetings to the headquarters. For a more detailed analysis there is not enough reliable resources at this time.

Both examples are an indicator of a high security threat to the country. In the first case, it is a probability bordering on the certainty of a pre-prepared information operation to help M. Zeman to win the victory in the upcoming presidential election in the Czech Republic. This is an important topic on which the Kremlin really matters. In the latter case, the meeting itself is problematic, when the President is accompanied by a person to whom the National Security Authority refused to give a clearance, and the other who has a direct relationship with the Russian company Lukoil. All without the Czech ambassador. Such a format is used by the Kremlin to negotiate private interests and hand over instructions.

In the Czech Republic, especially in the context of hybrid aggression, Russian propaganda is spoken. But that’s only one of her steps, and I need to see everything in context. What began in Ukraine with pro-Russian propaganda and the foundation of pro-Russian militant societies has now turned into a real war whose end is overlooked. Some sections of the queue are reminiscent of the trenches of the First World War, and some of the battle of the Russian-Ukrainian War can only be compared with what we have seen in the Second World War with the use of technology and live forces on the European battlefield. Propaganda all starts …

The author is a criminologist and political analyst. In 2012 he became a founding member of the Czech Criminology Society. It focuses on security issues, interconnection of organized crime and politics and trafficking in the EU and the former USSR.

[3] Putin praises Zeman: Thanks to people like you, we will renew our relations with the West, www.ceskatelevize.cz/ct24/svet/1527010-putin-chvali-zemana-diky-lidem-jako-vy-obnovime-zztahy-se-zapadem , 9.5.2015. Zavřelová, M., Kremelská sestava: Myman without review, Nejedlý z Lukoil, echo24.cz/a/wZZwE/kremelska-sestava-mynar-bez-proverky-nejedly-z-lukoilu , 11.5.15