We are educating people on gender issues; however, we often avoid using the word “gender,” because of… you know the common attitude to the word?

That was a routine comment of an NGO leader during a meeting with Special Representative of the OSCE Chairmanship-in-Office on Gender Issues Ambassador Melanne Verveer in Kharkiv (details here) and almost everybody nodded in apprehension. They acknowledged this common negative attitude towards the term.

My colleagues at Maidan Monitoring Information Center and I at had avoided this term in our work until very recently for a different reason – we did not see it as an issue for our organization.

However, the results of our projects, implemented in 2014-2017, led us to conclude that gender is the national security issue and we have to build a strategy and action plan for our NGO to address gender-based issues in conflicts prevention and transformation and countering information war.

Maidan Monitoring Information Center had organically grown out of an informal underground internet community, which was in opposition to almost all Ukrainian governments since 2000 until 2014. Our cause was true independence of Ukraine from the Russian Federation and affirmation of political (collective) rights and civil liberties in Ukraine, especially freedom of expression, freedom of peaceful assemblies, freedom of information, and electoral rights. We did not encounter anything gender specific in our work, related to these issues.

I joined Maidan.org.ua website community on the fifth day of its existence and had been the only female in a core administrative group for several years. Now, our NGO has equal representation of males and females. We did not specifically set any gender balancing goals; the balance came naturally with our very diverse activities and expansion in the number of our live contacts.

In no life circumstances, I felt myself a minority as a female. Perhaps because I belong to a number of other minorities that take serious precedence? I had grown up as a dissident in Soviet times, I was an activist of movement for independence of Ukraine and was a one of five people in my university wearing a badge of a national flag of Ukraine in 1989, when you could have been arrested for such a display (an associate of mine in Kharkiv was). I am a Ukrainian speaking minority in a predominantly Russian speaking city Kharkiv. In fact, I stopped hearing remarks about my Ukrainian only three years ago.

I graduated and briefly worked as a physical engineer, where females were rare. Finally, my major trade became system administration, which is traditionally a predominantly male job. I never experienced any gender-related problems in my professional life. My experience led to a classical overconfidence bias – I never saw the problem; therefore, it does not exist.

The first project that started to change my attitude was “Ukraine without discrimination.” It was a very detailed and deep study of the perception of discrimination in Ukrainian society and the only one of a kind to date.

The main discovery of the project was that people in Ukraine mostly perceive discrimination as any social injustice and most people perceive themselves discriminated.

You can read the results of that research here https://maidan.org.ua/wp-content/uploads/2016/06/Booklet_Ukraine-with-Discrimination_print.pdf (May 31, 2016)

Ukraine without Discrimination project was supported by the European Commission.

In 2014, I created curriculum, constructed trainings and facilitated those trainings in the area of information security (see my first training in Ukrainian – Feb 8, 2014). Later my colleagues joined me. To this date, we have conducted 48 trainings for activists, volunteers, students, journalists, civil servants, military personnel, that were attended by 2,500 people. Based on the feedback from these we determined that gender issues are actively present in information war.

During the last 16 years in Russia there has been a trend supported by the state, which they call “return to traditional values” (often referred as “Domostroy”), that legitimizes domestic violence, denies women’s equality, and promotes misogyny. These new social “norms” are being activity promoted via Russian mass media, reality shows, cinema, books, education, church, etc.  We have addressed these issues in depth in our analytical paper “International Framework for Ukraine’s Information and Communication Security” (2016) https://maidan.org.ua/secureukraine/

Due to its geographical position and historical development, the population of the east and the south of Ukraine was closely connected to Russia; it was and still is consuming mostly Russian made media products, especially soap operas and reality shows. It is practically impossible to stop the influx of Russian massculture into the region, which brings values contradictory to both the traditional values for this region Ukrainian and modern European values, especially in regards to women. The Ukrainian state limits broadcasting of Russian TV and radio; however, it is nearly impossible and unrealistic to limit massculture consumption via Internet and satellite technology.

This problem is not unique to Ukraine. We address it together with our European partners. For example, see my discussion with Ivana Smolenova, Fellow and Program Manager at the Prague Security Studies Institute.

One of the features of Russian propaganda is the narrative of “one people,” implying there is no difference between Ukrainians and Russians, including values. The current Russian narrative forces the role for a woman as a submissive, dependent housewife, who can make career only via sex services.

This propaganda contributes to increasing conflict potential of the society, enforces cult of gender-based violence, and delegitimizes women’s economic and social activities, and destructs social capital and trust.

Since 2014 we have been part of a large coalition project called “Ukrainian Peacebuilding School,” which is aimed at prevention and transformation of violent conflicts in Ukraine.

These are the main types of conflicts that we study and mitigate:

During the first two years of the project, our coalition was able to provide trainings on various skills for 1650 people, of which 1127 were women. The prevalence of females in various civic educational programs is typical for Ukraine. We took it for granted and did not observe any specific gender issues.

Our students organized 350 events within 96 projects we supported, aimed mostly at community building, conflict transformation, and providing support to IDPs and victims of conflict. These projects, in most cases, were classical cases accomplishing objectives of the UN Security Council resolution (S/RES/1325) on women and peace and security achieved mostly by women.

Within this project, we created four short location-based documentaries entitled “Women Peacebuilders,” featuring the success stories of peacebuilding work of women we trained, some of them are internally displaced persons. You can view these documentaries with English subtitles.

In the third year of our work due to a very high competition to our flagship educational project – Social Intermediaries School – we were able to select a gender-balanced group of students – 12 men and 12 women. During the interactive trainings, we had observed for the first time the total exclusion of five females who stopped talking to the group because they felt dominated by men. Further dynamics of the group confirmed the findings of the “Ukraine without discrimination” project on gender stereotypes.

The School team analyzed this situation, conducted further research in some communities of Donetsk and Luhansk oblast and decided to include gender-related conflicts in the curriculum of the 3rd installment of the Social Intermediaries School, which is scheduled to start in Kharkiv on September 25, 2017.

The alumni of Social Intermediaries School are becoming experts in conflicts transformation and earnest practitioners. With or without our assistance they organize practical dialogues on conflicts they consider vital for themselves. In Kharkiv oblast our student Olena Dryutska is working on the transformation of violent conflicts related to Roma communities. During the first public dialogue she volunteered to organize, the stakeholders had outlined serious problems regarding civil rights and education of Roma children and women and IDPs.

You can watch the whole discussion here (in Ukrainian and Russian – May 23, 2017), some faces are not shown on their request). https://www.youtube.com/watch?v=um2HE9o2U1g

The more comprehensive dialogue is now being prepared to find a conflict resolution strategy. Simultaneously, our alumni in Odesa oblast had detected the similar conflict and started its analysis.

This year we plan to train 30 more social intermediaries.

Since 2014, a project run on a purely volunteer basis “Maidan Monitoring Free University” is dedicated to popularization of Ukrainian (and sometimes foreign) scientists. Up to the date there were 113 lectures recorded on Youtube  (the full list is here ). The female project lead Oksana Seredkina and the team is focused on equal opportunities for men and women proficient in different fields of science to present their findings and work

The 2nd and 3rd most popular lectures of the project so far were presented by women – by Olga Utevska “Ukrainian gene pool in European context”   and Tetyana Rokhmanova “Sound illusions and how to fool your ears?”

The content of these lectures is comparable to the best programs of National Geographic.

It is worth noting, that there are projects with similarity to our free university, where majority of presenters are males. We plan to study why this happens.

While other civic organization drop the word “gender” from their activities because it has a bad connotation, Maidan Monitoring Information Center decided to start working with gender issues. We already have experience to share and we plan to acquire more.

I mentioned mostly our activities in Kharkiv (all the mentioned videos and publications were made in Kharkiv) where our main office is located. However, our NGO members live in 16 regions of Ukraine and 4 other countries.

Dear colleagues, I welcome your input on gender issues. 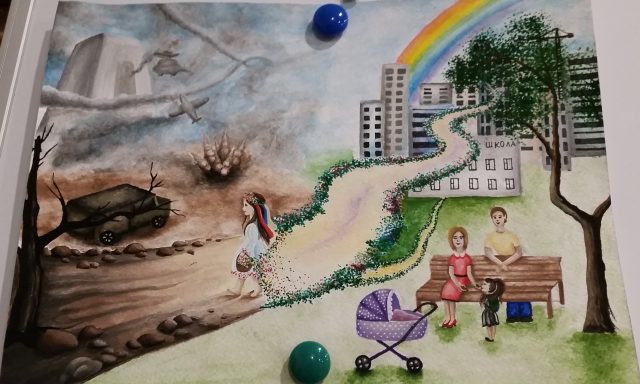 A winner picture of a kids arts contest “I am a magician”, organized by our alumni in March 2016. 278 artworks from 74 locations were submitted. 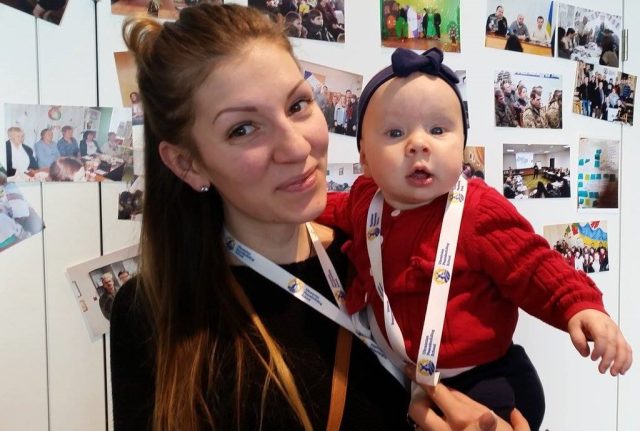 Daryna Shevchenko, the youngest (at the time the picture was taken in March 2016, not anymore) participant of the Ukrainian Peacebuilding School project. Her mother, Anastasia, manager of the Social Intermediaries School, does not want her kid to draw the pictures as above.