Meanwhile, Russian newspaper Kommersant reported on Thursday [December 26, 2019] that Moscow has a “pipe-laying vessel” to finish the project.

President Vladimir Putin told a gathering of top Russian businessmen about the vessel late on Wednesday, the paper said, citing some sources who attended the event.

Putin said the completion of the project would be “stretched” by several months due to the sanctions, Kommersant added.

This however raises concerns amongst European ecological activists, according to information from our (Maidan Monitoring Information Center) sources.

Indeed Russia has never been known as a country having technologies and experience for building pipe laying ships of the required kind. For example, as Kyiv Post reports on December 25, 2019,

Russian shipbuilders can construct pipe-laying ships that would complete the pipeline, but it would take from four to six years, according to Alexei Rakhmanov, president of Russia’s United Shipbuilding Corporation

According to Rakhmanov, Russia can replace them with its own ships, but it will push the launch date at least till 2024. The Nord Stream 2 is now 93.5% completed.

“As far as I know, we don’t have any ships ready for this job,” Rakhmanov told Russian state TV channel Rossiya 24 on Dec. 24. “It will take one or two years to design such a ship, and another three or four years to actually build it.”

At the same time, Russia is famous for their technology failing regularly. Just these days another unique Russian vessel was in the news e.g. Business Insider reported on December 12, 2019:

Russia’s only aircraft carrier, which has regularly been described as the worst in the world, burst into flames on Thursday while undergoing repairs.

10 people are injured, three are unaccounted for, and six were saved from the Admiral Kuznetsov, which was at port in Murmansk, according to reports from Russian state news agencies TASS and Interfax.

The aircraft carrier was undergoing major repairs at Russia’s Arctic port in Murmansk, also known as the Barents Sea port.

The ship was seriously damaged in October, when a crane toppled over and smashed a 214-square-foot hole in the hull.

On a 2016 mission in Syria, the carrier saw the loss of two onboard fighter jets in just three weeks.

It is however a very different story when a unique Russian vessel threatens not merely the vessel’s staff but the ecology of the Baltics, which can be seriously affected if pipelines laid using “unique Russian technology” crack or otherwise fail when already in operation.

Ecological activists of potentially affected European countries are now discussing steps directed to pressing their governments in order to re-evaluate ecological risks created by the new situation and to reconsider authorizations granted earlier to Nord Stream 2 in view of the new circumstances and threats to the sea where technologies are going to be used now originating from very non-reliable manufacturers, according to our source. 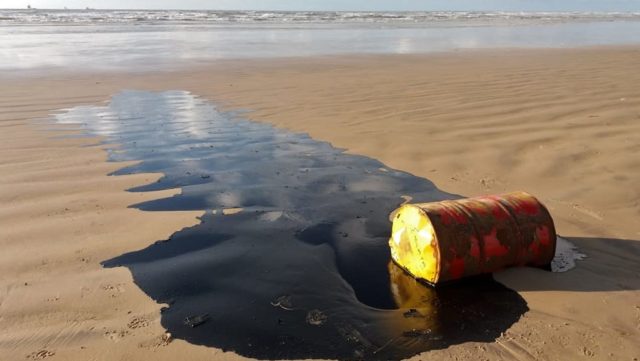 Cognitive biases as a weapon of Russian information war