The 5-day session included both traditional training modules, which were outlined in the publication about the 4th year of the School, and the new ones.

A new workshop was implemented by Olena Znatkova, an alumna of the 1st Social Intermediaries School (SIS), an internally displaced person from Luhansk. Her workshop  “Civic Participation – What is it and why it is needed?” featured the format of dialogue interaction “The World Café” and artwork based dialogue tool “Power Flower”, developed by Canadian social change educators, adapted by her for the context of the relationship between activists and authorities. She brought “flower” paintings of civil servants and compared the results with the students. See the video with results presentation (in Ukrainian and Russian).

A new workshop by Igor Dubrovskiy “We are modelling changes” addressed the changes in the group behaviour caused by different attitudes towards the interaction between the society and authorities. The  workshop featured the group interactions where participants had to find a way to establish the quick contact with citizens or authorities. See some fragments of the training (in Ukrainian)

A traditional interactive lecture by Nataliya Zubar “Role of social intermediaries in the information security” was complemented by the list of cognitive biases used in information war and the basic ideas of debiasing.

A student from Lyman, Donetsk oblast Oleksiy Kachan have brought a new practice into the SIS work – unique energizers tailored for the conflict related occasions. Oleksiy develops customised energizers for the SIS 5.3 as one of his homework assignments.

We had a special guest Nataliya Yakovleva, the leader of “Kharkiv With You” charity foundation, who volunteered to provide a lecture on grant possibilities for educational projects in Ukraine. Nataliya has been fighting breast cancer and the participants of the School wished her all happy recovery.

About 30% of participants felt a little bit uncertain at the beginning of the school and were not sure whether they could become social intermediaries. During the second session all of them stated that they have a vision of their participation in the conflicts as intermediaries.

One of the differences of the SIS 5 from the previous four schools is that more than half of the students have already started organizing negotiations related to real conflicts in their communities.

Some negotiations organized by SIS5 alumni so far are as follows.

Yelyzaveta Bunchuzna helped to organize in Melitopol the research of the relationships between the authorities and citizens and the social modelling game dedicated to the local youth development.

Olga Ovsiannikova participated in organization in Prymorsk of negotiations between local authorities and young activists which resulted in creation of Youth Council in the town.

Yana Bratchenko from Kramatorsk works on conflict related to specific conditions for businesses in areas adjacent to contact line in Donbas.

Victoria Gontar works on a decentralization related conflict in Borova between youth and local government.

Olena Potapenko and Inna Rudenko work on conflict between Kherson Regional State Administration and the population of Vysokopilsky district about central gasification.

Oleksandr Liubimov works on the conflict between business and local authorities in Mariupol.

Before we started cooperation with Kurve Wustrow the topic of non violent activism and non violent communication was present in SIS curriculum only in Zbignew Bujak’s lectures and workshops. During SIS 5 it has become the main focus of the school. Lecture of Igor Dubrovskiy “Intermediation as a consultation and negotiation practice” focused on consensus as a nonviolent decision-making process and the applications of such processes in conflict.

Some interesting details can be found in the photos’ descriptions below. 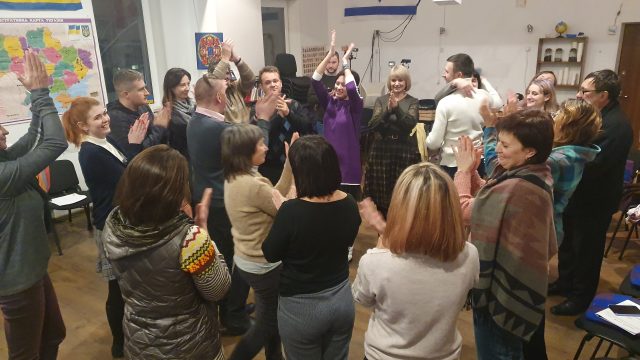 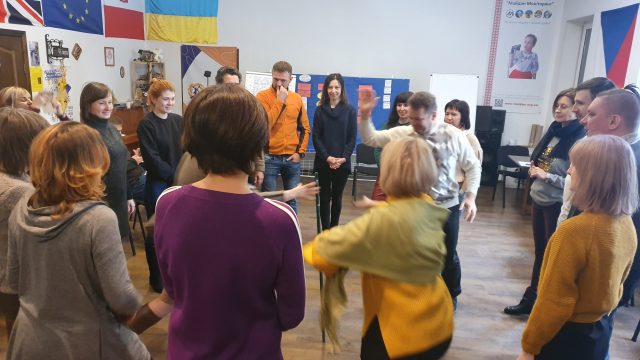 Another new energizer was introduced by Liliya Bielyakova 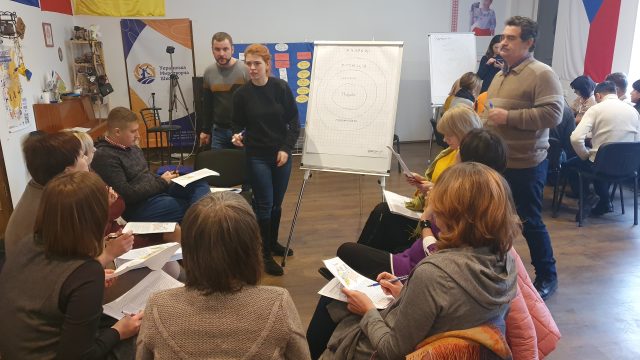 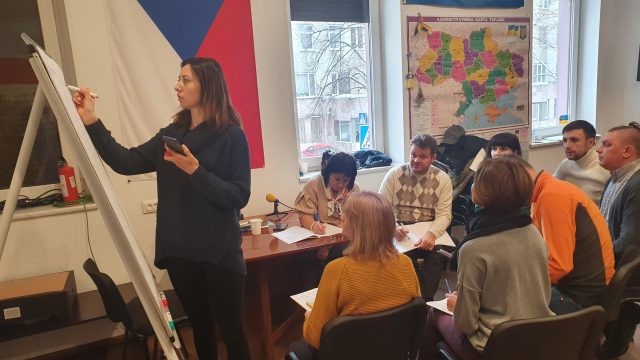 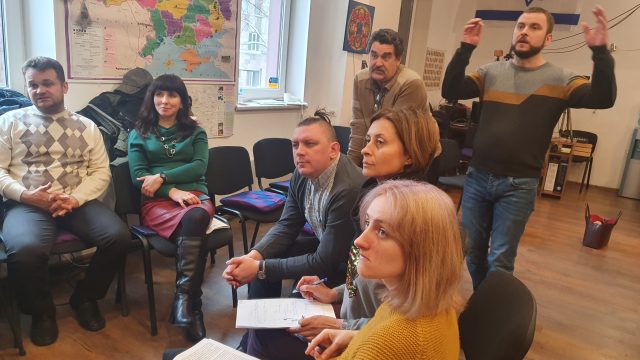 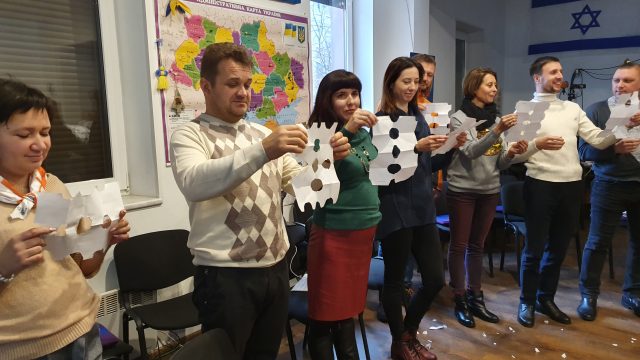 Results of a short training-energizer by Hanna Churkina,which shows that not all the people follow the same instructions the same way. The idea was inspired by Media Literacy trainings she participated in. 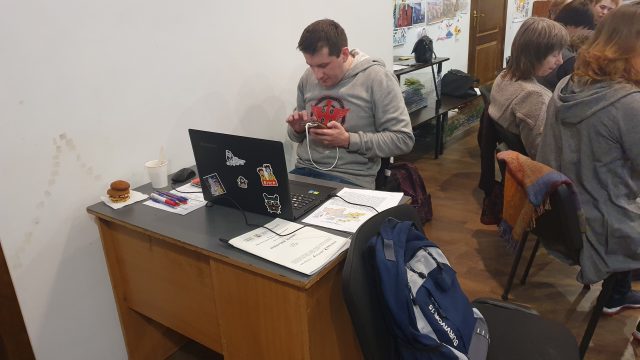 For the first time in 5 years we had a male facilitator Andriy Rudenko, whose work was commended by the participants. 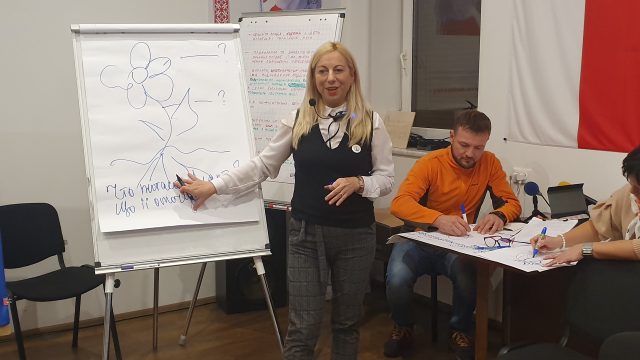 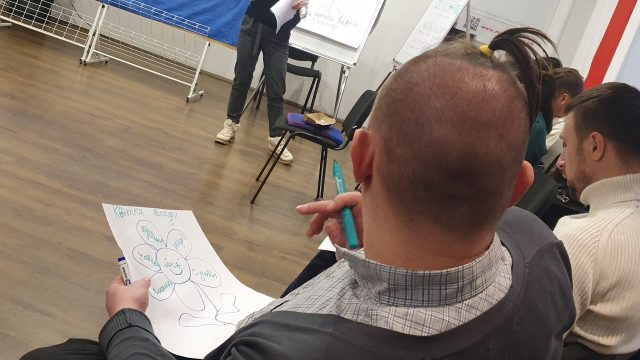 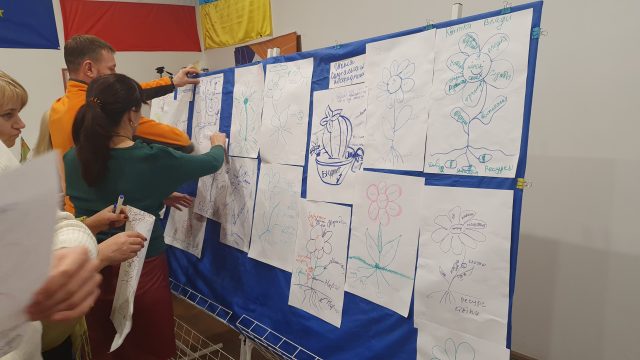 Students put their drawings to the “gallery” 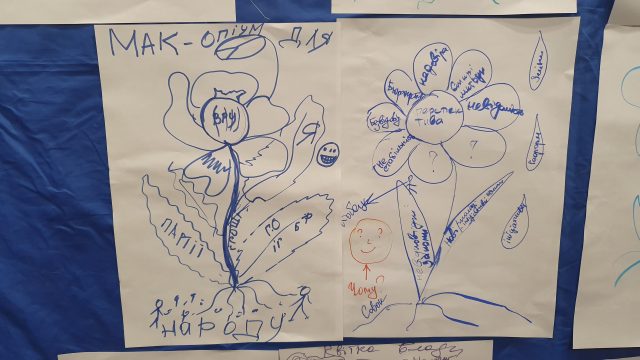 One of the drawings – “Poppy is an opium of the people” (Opium des Volkes, Karl Marx) 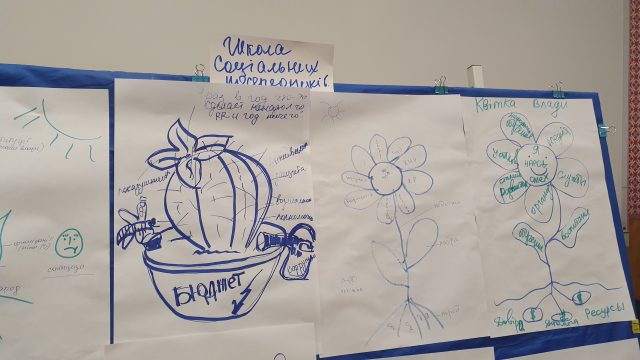 Drawings of the SIS students 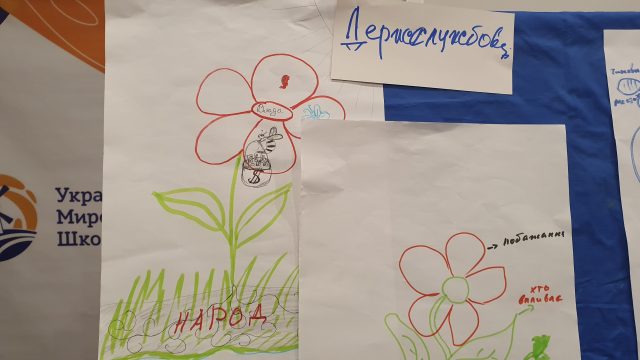 Drawings by the civil servants 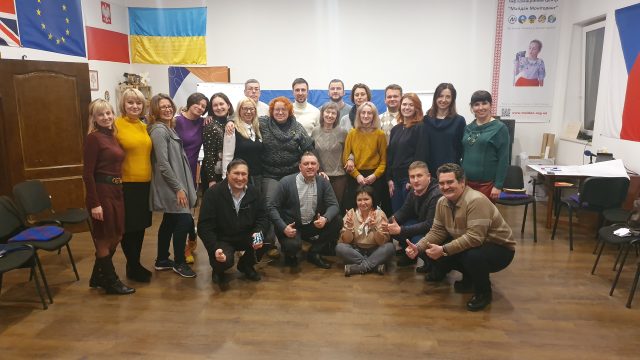 Family photo of students and trainers 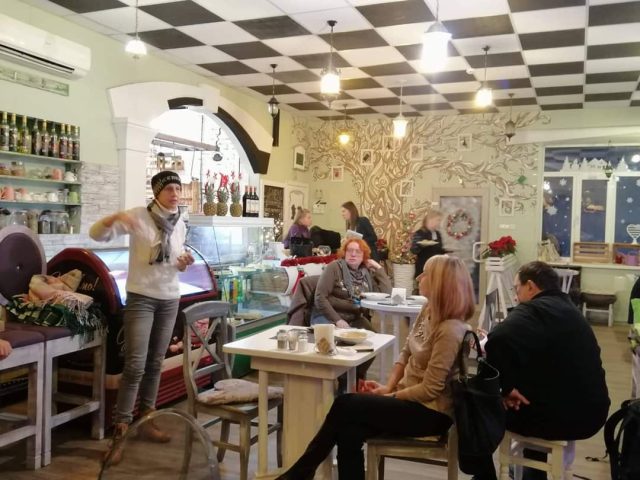 Nataliya Yakovleva speaks on grant opportunities for education as the group dines. 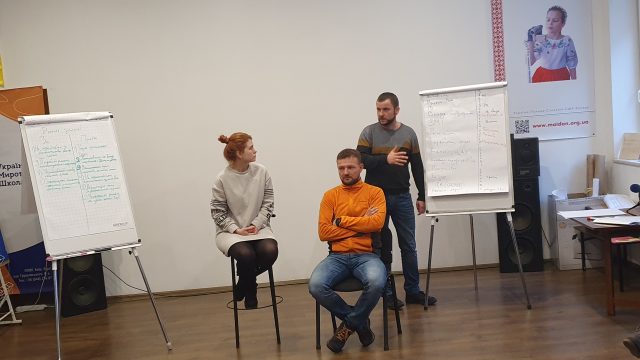 Two students volunteered to moderate a discussion for the first time in their life. Dmytro Zvonok prepares them for the new role. 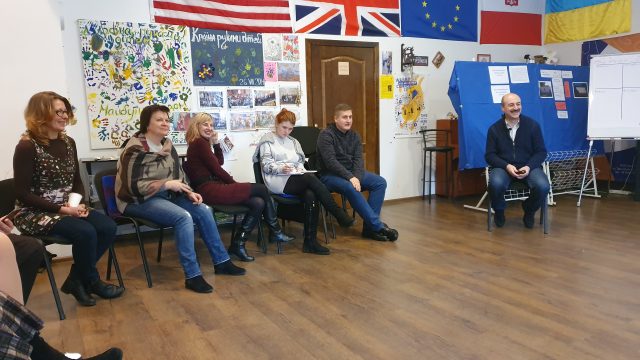 Fragment of the training “Group Dynamics” by Volodymyr Lanko. The students’ group had a wonderful dynamics. 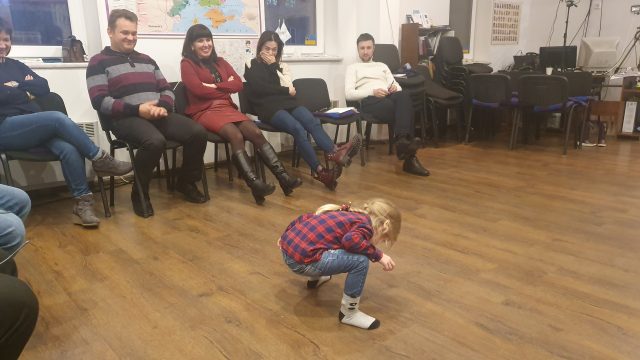 Kids are traditional participants of SIS trainings, they contribute the good vibes to very complicated topics of violent conflicts.

Feedback of Yulia Chaika, an activist of Democratic Sokyra Party who is embracing alocal deputy of Opposition Platform party. She writes “If we are embracing it means that the conflict transformation trainings are working and the topic of social intermediation is important for the Ukrainian Society”. (These two parties are in sharp opposition to each other).

In 2018-2020 the Social Intermediaries School is part of the Civil Peace Service program: “Empowerment of civil society for non-violent conflict transformation with state actors – Project-line ‘Platform for (successful) Nonviolent Activism’”. The project is funded by Kurve Wustrow – Centre for Training and Networking in Nonviolent Action, within the framework of Civil Peace Service, a program of Germany’s Federal Ministry for Economic Cooperation and Development (BMZ).

Kharkiv. Chronicles of the Attack on the City. Day 10.