After almost total silence the day before, the shelling increased a little today, but only in the suburbs. Some ammunition appears to have been delivered. There was no shelling of Kharkiv, according to the head of the Kharkiv Regional Military Administration, Oleh Synehubov. Based on sounds I heard, there was shelling around the district beltway in the north of the city. There were also no strikes by rocket artillery.

Still, the day started with a rocket attack. The rockets struck Chuhuyivskyi district, damaging a pumping station building and its equipment. However, for the first time since 20 May, there were no rocket attacks on Kharkiv or its nearby suburbs. At 9:45 pm muscovites launched two rockets in the direction of Kharkiv. One could hear two rockets striking outside of the city: one in the Solonytsivska Hromada, destroying a restaurant complex by the blastwave, and the other in an empty piece of land in the Novovodolazka Hromada. 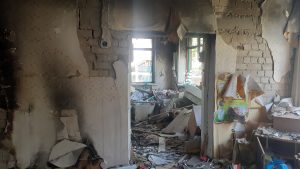 Fighting continues north of Kharkiv. The muscovites are attacking most actively from Kozacha Lopan in the direction of the village of Dementiyivka, of the Dergachi Hromada, but these attempts have been repelled by the Ukrainian military.

According to the Kharkiv mayor Ihor Terekhov, city workers are helping to build defense structures not only in Kharkiv, but also elsewhere in the region. In general, work to prepare fortifications in the Kharkiv region is ongoing.

The French football club “Lille,” from the city of the same name, a sister city of Kharkiv since 1978, collected humanitarian aid for almost 25,000 Kharkiv residents in March.The victims have already received it.

It’s come to light that three people were evicted for alcohol abuse from another resort, Berminvody, near Kharkiv, housing about 500 refugees.

The State Bureau of Investigation has provided more information about Bohdan Malyovany, deputy chairman of the Kharkiv Regional Council who has had a muscovite passport since 2014. The SBI has initiated his suspension. Malyovany, according to the head of the Kharkiv Regional Council, Tetyana Yehorova-Lutsenko, refused to sign the suspension notice. He worked remotely for the two months starting 24 February while staying outside of the Kharkiv region. He later returned to Kharkiv and went to work but then again chose to work remotely. At the session of the regional council, the head of the council asked Malyovany to at least explain his position or describe it on Facebook. Deputies to the regional council must approve the decision to suspend during a council meeting. However, decisions about appointments and terminations are voted offline only, via a secret ballot.

Two more trolleybus routes to eastern Saltivka will be launched on Monday, one from the Odeska district, and the other from Karavan (DAFI shopping mall).

The long-suffering kindergarten number 354 in Pavlove Pole, repeatedly shelled along with the surrounding houses, has now been cleaned by employees and volunteers from the public organizations Ya Vryatovanyj and Buduemo Ukrainu Razom. A portion of the premises, including some of the furniture, has burned down. There isn’t a single room left intact in the entire building after the shelling.

Meanwhile, police and the Security Service of Ukraine are working on bringing to justice residents of the region who helped the occupiers or supported their aggression against Ukraine:  a resident of the town of Sakhnov, center of the Sakhnovshchynska Hromada, was arrested for collaboration. Additionally, the case against a resident of the village of Vysochynivka, of the Zmiyivska Hromada, was sent to court. The latter was gathering information on locations, movement, and dislocation of units of the Ukraine’s defense forces; personal data and photos of local residents deployed by the Armed Forces of Ukraine and their relatives, and transferring this data to the occupiers.

According to the Kharkiv Regional Center of Culture and Arts, Sakhnovshynskyi bread differs from other breads because it is single-layered, with a light to deep-brown crust and dough decorations with plant elements. There are three most common ways to make a loaf: from a single piece of dough; from one large and nine small pieces of dough; and from two interconnected dough “braids,” a small central piece of dough, six around the central cones, and small pieces to fill the mold.

The traditional Kharkiv kotsarstvo stems from the production of long-pile wool carpets in Slobozhanshchyna. Traditional kotsatstvo declined with the development of factory manufacturing at the end of the 1900s. Currently, bearers of the tradition live in Kharkiv, Valky, and Kovyagy.

According to Kharkiv Regional Prosecutor’s Office, two former policemen from Izium, ages 23 and 31, became collaborators, joining the occupiers’ side. They joined the ranks of the occupation’s so called “people’s militia” and also provided the muscovite military with information about the location of the prosecutor’s office and other administrative buildings in the city. They were notified in absentia that they’re being suspected of treason committed under martial law.

In Izium, the ruscists fired rocket artillery at the Kremyanets Mountain while people were gathered there trying to get in touch with their relatives via mobile phones. According to reports by the publication Obriyi Iziumshchyny, there are dead and wounded as a a result.

Volunteers managed to deliver medication for cancer patients and insulin-dependent patients, as well as other meds, to the occupied Izium and residents of the Izium Hromada. Volunteers bring the cargo to an agreed-upon place, from where the residents of Izium pick it up on their own.

There are government perturbations in the occupied territory of the Kharkiv Region:

– Vitaliy Hanchev remains the main gauleiter of the occupied part of Kharkiv region. He has the support of curators from United Russia. The administrative center of these territories is Kupyansk, located far from the front line. It is an important transport hub for the muscovite army.

– Former mayor of Kupyansk, Hennadiy Matsegora, who surrendered the city to the muscovites, was arrested by the occupiers.

– In Balakliya, the head of the occupation’s so-called “city administration” is a muscovite named Yuriy Shevchenko, who as recently as this March was referred to as a “volunteer of the humanitarian organization Peace to Kharkiv. Serhii Aharkov, a Kharkiv separatist and a freak who fled to moscovia in 2014 and has now returned to the occupied territories, became his deputy.

– The gauleiters of Borova, the muscovite commandant and the civil administrator from Belarus, disappeared from the village. Local collaborators now rule there. Who is the head of the occupation authority is unknown.

– Power in Vovchansk remains held onto by a collaborator, former mayor Anatoliy Stepanets, who stated at the beginning of March that he would not cooperate with the ruscists.

– In Izium, Vladyslav Sokolov continues to be the leader. He now has deputies: Oleksandr Kishynets from Yenakievo, an occupied part of the Donetsk Region, who in 2014 was deputy commander of the battalion of the Donbas Veterans Union Berkut (he was captured by the Ukrainian military in the same year and after some time was exchanged and returned to the temporarily occupied territory); Hleb Tkachenko, who previously headed the city’s resource department, became the main “communal officer” of Izium; Lyubov Tkacheva, former unemployed member of the Izium District Council from United Platform – For Life, is responsible for propaganda in the city (she is also the editor and publisher of the Iziumskiy Telegraf propaganda magazine. Many law enforcement officers in Izium and other hromada centers in the occupied territories have started to cooperate with the occupiers.

– The head of Kozacha Lopan after Vitaliy Hanchev was Maksym Hubin, who used to live in Kharkiv and was engaged in fraud. In 2014 he allegedly had pro-Ukrainian views and wanted to join the Anti Terrorist Operation but was not accepted, after which he changed his beliefs. Hanchev took Hubin to Kupyansk and appointed him to be the head of the so-called occupation “Kupyansk district administration.” After that, in Kozacha Lopan, the head of the so-called occupational administration became Ihor Telyatnikov, a pensioner from Kharkiv. He was a deputy of the Kharkiv City Council from 2006 to 2015, but in 2015 surrendered his mandate in favor of another deputy from the Vidrodzhennya party. At that time it was an umbrella party for the then mayor of Kharkiv Kernes.

By Family Day the resistance movement of pro-Ukrainian partisans intensified their activities in the occupied territories and posted leaflets about the cities and towns in those territories being part of Ukraine, particularly in Kupyansk, Balakliya, Vovchansk, and Velykyi Burluk.

There’s no calm in moscovia. First, according to intelligence information from local residents, there are people willing to “cross the border with Ukraine” everywhere, even in Belarus, and surrender to the Ukrainian authorities. Maybe they are afraid of the concept of “BNR,” which has become a meme and a synonym for Belgorod and the Belgorod Region in Kharkiv social media.

It is interesting that folk craftsmen made a whole series of flags and various symbols of the “BNR” that vary in colors. Anyone can come up with an idea, because it’s a meme. Secondly, local residents are worried that in the event of mobilization residents of the territories bordering Ukraine, like the Belgorod region, will be the first to get the call. They are now thinking of hiding. This is what I have kept repeating. Psychology of people under an authoritarian regime during a war without much success does not contribute to the readiness and willigness to fight for something illusory, with a high probability of death.

There’s a conspiracy theory spreading among Belgorod region residents that oligarchs who are on a “third side” want to depopulate the territory of the region by evicting or killing people because there are some very valuable resources underground that will make this territory the second Kuwait. But that’s not all. As they do this, a war will begin, and this “second Kuwait” will be captured by the Americans. Interesting conspiracy theory, but why make it so complicated? Why not make the Americans complicit in the “genocide” of the people of Belgorod? This would have the concept of war on one’s territory play out in interesting ways in the minds of local zombies.

Today’s Darwin Award goes to the resident of Krasnohrad who from the balcony of his own apartment was campaigning for the “Russkiy Mir.” Neighbors called the police, who detained the man. This is not the same as “Lenin on a personnel carrier,” sorry.

Let us believe in the defense forces of Ukraine and the Armed Forces of Ukraine! Let us help volunteers, medics, and rescuers. Everything will be, Ukraine!