You pass through the checkpoint. And there you are not met by the military, but by children playing war with toy machines. A similar picture can be seen both near the front and in more or less peaceful towns and villages. Children’s roadblocks became as much a feature of wartime as explosions and air strikes. 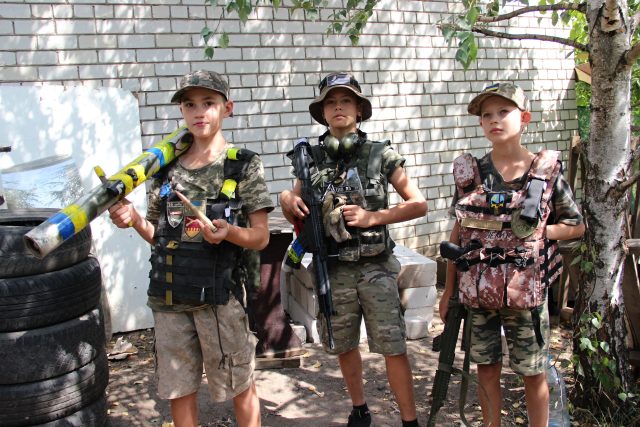 One of these checkpoints is currently operating in Mala Rohan (in English – Little Rohan). This small village near Kharkiv was badly damaged during the Russian occupation. The enemy invasion is constantly reminded by destroyed buildings, bursts from shells, burned equipment and the abandoned positions of the Russian invaders with their trademark dirt and mess. You can find ammunition, uniforms, bags of dry goods, mountains of garbage there. When Mala Rohan was liberated by the Ukrainian military, local children began to explore such places. 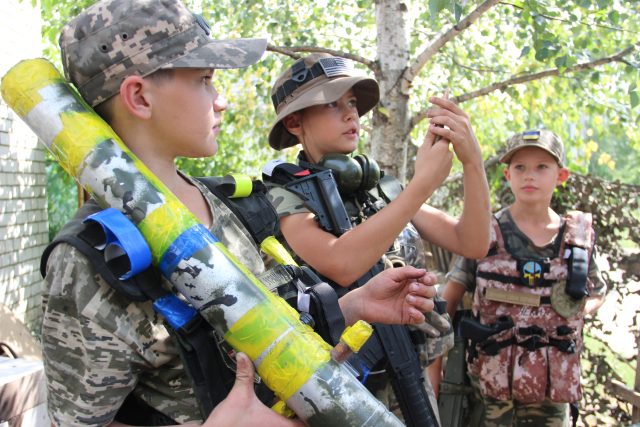 Nazar, Artur, Nikita are among such active researchers. We met them in the village while documenting its destruction. Friends repeatedly visited the positions of the occupiers. And they willingly agreed to share their discoveries. That day, the guys showed a lot of burnt Russian equipment. They also put forward their own versions of which weapon it was destroyed with – “Hurricane”, “Javelin” or even “Solncepek squeezed from the orcs”. They carefully examined more or less remarkable findings, showed off the most interesting ones and discussed what could be given to the military.

Even a dog will refuse to eat Russian dry ration.

The children remembered how they unpacked the Russian dry ration. Purely out of curiosity – the smell was completely unappetizing. Even the dog refused to eat it. Also, the children did not forget to demonstrate what they had managed to learn since the beginning of the invasion. For example, when they found a cartridge on the ground, they immediately tried to determine its caliber and type of weapon. The boys themselves said that they learned all this during the Russian occupation. For example, they already know well how “Grad” (a self-propelled 122 mm multiple rocket launcher designed in the Soviet Union) works. At first, they were not given any lectures. And there was nowhere to read the information – the village remained cut off from the world.

After the liberation of the village, the children set up their own checkpoint. According to them, they did it on their own. It must be said that the friends approached the matter carefully. They covered the roadblock with a camouflage net, set up a table for ammunition, got first aid kits, “Bronics” (body armors) and toy automatic machines. They wrapped them with blue tape, just like the Ukrainian military does with real weapons. Children have turnstiles with them and immediately demonstrate how they can handle them. They say that they have already learned the techniques of providing first aid. According to them, in case of trouble, they will be able to help someone. 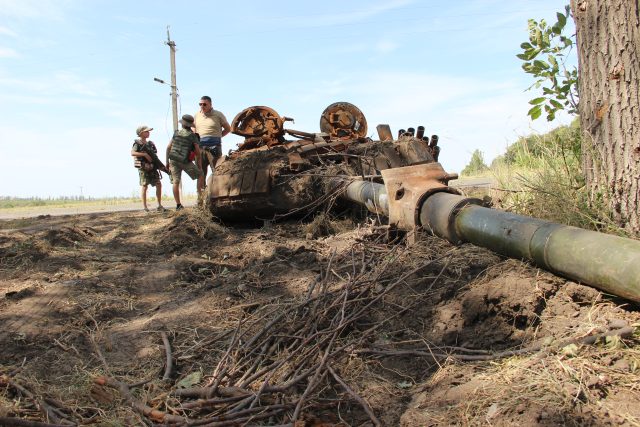 “We arrived, I waited for my friends,” – Nazar recalled. – And such an idea came to mind: to create a checkpoint. To begin with, it was built from grass and sticks. And now we have reached such a level. Because now there is a war in Ukraine. We somehow want to help our country and support our military.”

By the way, this is not the first time that some global events have influenced children’s games. The Revolution of Dignity should be immediately mentioned here. Back in 2013, a new game appeared in the children’s game – “Maidan”. The children recreated what they saw on the news or heard from the adults. For example, they tried to break into a blocked class, set up barricades or split into warring factions. Of course, it was necessary to divide into roles. For example, some children could depict activists, and some – Berkut riot police.

“My youngest son was five years old during the Maidan, at the beginning of the war,” recalled Maria Andreas from Kharkiv. – He just turned thirteen. There were always war themes in Lego games. And this year, I noticed that he began to decorate many educational subjects with examples from the events of the war. Chemistry is about explosions, phosphorus glows when it flies. Physics – the difference between the flash after rocket hit and the sound allows you to calculate the distance, the speed of sound is less than the speed of light. Geometry – the area of regular shapes – these are occupied and liberated lands… Lessons taken from life.”

“We live in the Khmelnytsky area” – Viktoria Kolesnikova said. – Sometime in May, when we were driving past the village, our car was stopped by about five or six boys of six or ten years old with wooden rifles. They demanded the driver’s password. We answered with “Palyanytsia” (a Ukrainian shibboleth), after which they wished a happy journey. This happened shortly after territorial defense roadblocks were removed, leaving only strategic ones instead. In the summer, the children also play war in the yard: they capture the rascals, sing “Oh, there’s a red viburnum in the meadow…”, discuss what they heard from their parents and the news.” 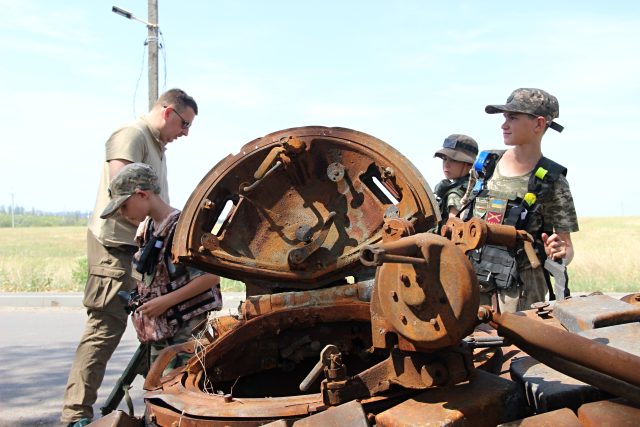 As we can see, children tend to reflect in games what they see or hear in the real world. Including wars or revolutions. And, according to psychologists, this is an absolutely normal situation. Moreover, such games help the children themselves to get used to this turbulent world.

“In general, game is the main activity of our children,” explained Tetyana Hryda, a child psychotherapist and head of the board of the NGO “Kharkiv Fund for Psychological Research”. The games could be different, from pure sensory ones up to complex role playing. Adults play the roles as well. The game has many functions – educational, entertaining, communicative, reflective, psychological. If we talk about such games as “Checkpoint” or “Maidan”, then they belong to social role-playing games. The child learns to identify himself in the society (s)he lives.”

Of course, children imitate the activities of adults. Now you can see how soldiers behave at checkpoints, how they ask for documents, check the car, etc. For a child who finds himself in a very uncertain world, such a game helps to reduce anxiety. According to the psychologist, now it is difficult to identify who belongs to Us, and who doesn’t, who is a collaborator, and who is not. The aim is to understand the other people’s values and views. Take this popular password – “Palyanytsia”. Children actively use it to distinguish our people or someone else’s.

“Society is currently very supportive of our military,” – Tatyana Hryda said. – We are very proud of how they protect us, how they give their lives so that we live in peace. And that’s why the child wants to be socially accepted, to be strong, brave, courageous. Identify a little with this image of an adult. And feel this strength in yourself.”

The game also has communicative and integrative functions.

The game also has communicative and integrative functions. After all, children interact with adults who support them. Some immerse themselves in it, for example, changing the password a little so that the child has more fun. And that’s why this game has become so popular. In some places, at such checkpoints, children even collect money for the Ukrainian Armed Forces. This is their contribution to victory. The educational function should not be forgotten either. According to Tetyana Hryda, the child wants to know the world, to understand the laws by which it functions. And exactly “Checkpoint” is one of the games that help her get used to it a little.

“If we talk about educational and creative functions, then children create checkpoints, build barriers,” said the psychologist. – For this, you need to somehow apply your creative abilities, master different roles, for example, a commander, a subordinate or a person who is being passed over. Of course, there is a psychological function. The game relieves the tension that exists in our society. I remember my childhood. We lived 35 years after the war. But in the 70s, we played war. And it also gave us some kind of connection with history, knowledge about who is an enemy, who is a friend, who is a person who does not betray. It made it possible to somehow get used to this world. I mean these games will be around long after the war is over as a need to know this reality”.