Often, we hear, Freedom has a price.  In the war Russia is waging against Ukraine, this also applies.  Ukrainian soldiers are fighting to regain the occupied regions and every day, they pay the ultimate price.

When the war in Ukraine started, the country called for help and many foreign volunteers came to Ukraine to train, to help, but also to fight along their Ukrainian brothers in arms.

And sometimes, they also lose their lives. One of them, a young Taiwanese volunteer, Jonathan “Tseng” Sheng-Guang-Tseng, born 1997, received the last honours today in Lviv.

Many people, Ukrainian and foreign, joined in paying him the last tribute.  He served 2017 till 2021 in the Taiwanese army as an infantry soldier. In June 2022, he joined the 49th Separate Rifle Battalion “Carpathian Sich” and was a valuable and treasured comrade.

On November 2nd, Tseng was killed near Lyman.

His wife, mother and family were present today at the Church of the Holy Peter and Paul in Lviv.  One can does not grasp how sad this farewell was.

But his fellow soldiers and the people from Lviv were there to say goodbye and thank you.

One of many, yet never forgotten.

Today, we honour him with an important and famous text from Shakespeare.

From this day to the ending of the world,
But we in it shall be remember’d;
We few, we happy few, we band of brothers;
For he to-day that sheds his blood with me 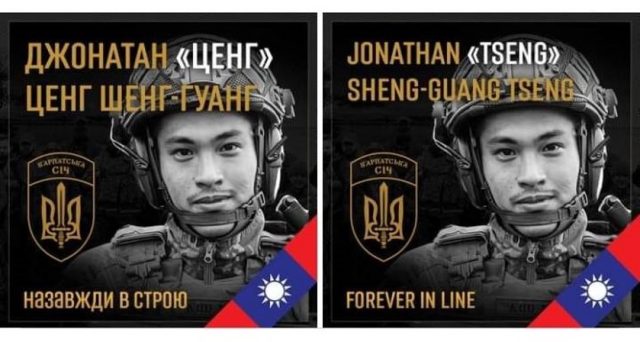