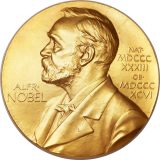 There was a lot of discussion about Bob Dylan and his Nobel prize. But there is a perspective that nobody has talked about … yet.

First of all, many of us were growing listening to Bob Dylan’s songs and how can anyone have any second thoughts about him getting the prize? However, this is not about Bob Dylan, this is about true meaning of Nobel prize.

My point is that Nobel prize is not just another prize like Grammy or Oscar, it is and should be different. While Grammys and Oscars are awarded to people, who are already rich and famous and already got plentiful attention of media, Nobel prize is usually awarded to scientists. People nobody hears about, ever, people which humble work is profoundly changing our world. Which work eradicate illnesses and brings new technology to our life, making it easier to bare. Which work influences us in invisible but resolute way.

Nobel prize is some kind of social corrective, in which humanity says to those hardworking and neglected people, individually as well as a collectively: “Thank you, people maybe don’t know about you, but you made the difference.”

Therefore, awarding this price to people like Bob Dylan is in my opinion negating the principles of Nobel prize. Not because of the laureate’s work, but because of the wrongly directed attention.

This is about true meaning of Nobel price