It’s getting quite difficult to continue describing this routine, days of rather similar character with small differences between them—all with the same scenario of shelling residential areas. Sometimes a building gets hit and sometimes the bomb falls nearby. Therefore, I understand perfectly well that my chronicles are becoming less informative about the state of affairs in Kharkiv. 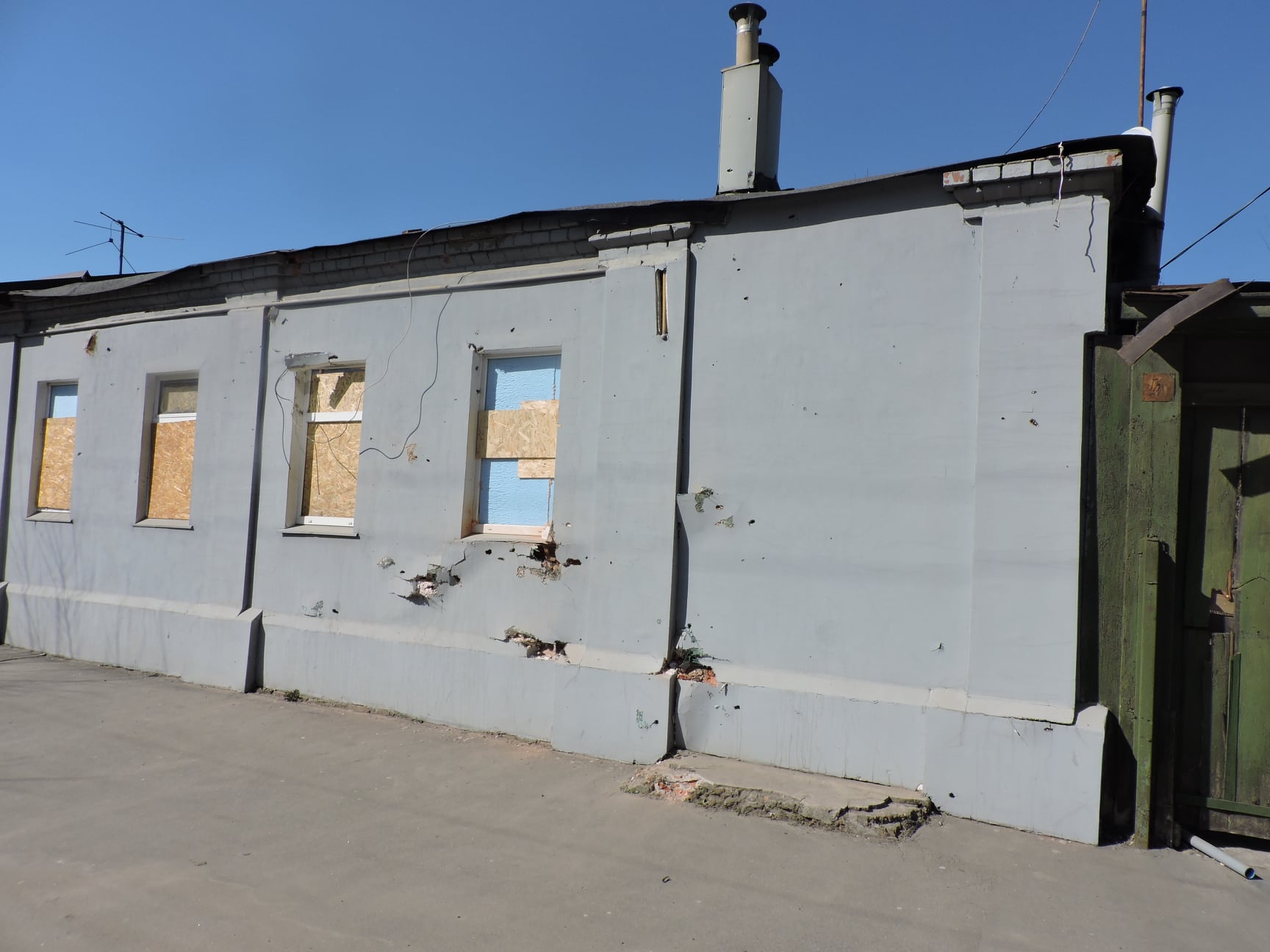 One of the damaged residential buildings in Kharkiv. The shell fragments pierced the walls. Photo: Serhiy Petrov. Copyright: CC BY-SA 4.0

First, about the evening missile strike. They had already aimed there before (by the way, there is a school nearby) but missed. Same story this time, except they succeeded in destroying the facade. The purpose of shelling in this place is difficult to understand. For what reason? Is it to destroy an architectural monument and “denazify” another school, which had already been hit twice?

In general, the number of muscovite shellings today was slightly higher than yesterday. After an intensification in the evening, the orcs calmed down until morning. In the morning there was an intensification again, obviously because of the negotiations. They have been postponed until tomorrow, so in the middle of the day the activity began to fade. The evening was relatively quiet, just  a few outbursts, a little earlier than usual, that’s all.

The russists shelled Pivnicha Saltivka and the rest of Saltivka, Oleksiyivka, Pyatykhatky, the village of Zhukovsky, Obriy, the Kharkiv Tractor Plant neighborhood, and Novi Budynky. A short series of shelling, as usual. There were strikes on residential buildings. The nuclear research facility called “Dzherelo Neitroniv” (“Neutron Source”) at Pyatyhatki was also shelled once again, damaging the building. Although this building is heavily protected, further destruction can lead to air pollution in the surrounding area. In addition, during the shelling of the village of Zhukovsky and KHAI (the National Airspace University of Kharkiv), university buildings were damaged. So far, not only Karazin University has sustained damage but also other military and police universities. At least one person is known to have been injured as a result.

Kharkiv’s cat Stepan, who is now in Spain with his owner, managed to raise more than $10,000 to help animals in Ukraine, particularly the Mykolaiv Zoo. Respect!

The swinedogs fired at Derhachi, the Chuhuiv direction, and Lyubotyn. Seven single-family homes were set on fire, one person was killed, and seven were injured.

There isn’t much news from the broader region today. Fighting continues in and around Izyum, which our army is defending, not allowing the muscovites to get on the road to Slovyansk. Another airplane and drone were shot down in the Kharkiv region.

Balakliya mayor Ivan Stolbovyi is free. However, he agreed to cooperate with the occupying forces—they will distribute muscovite humanitarian aid and work on restoring communal infrastructure. That’s obviously the reason he hasn’t been in touch. As he has stated,

Balakliya is blocked and no one else will help us. The head of the Kharkiv OVA (Regional Military Administration) Oleh Synegubov has already characterized these actions as treason. Mr. Stolbovyi himself is a former communist, then member of the Party of Regions, and in the last local elections was elected by the Kernes Bloc—Successful Kharkiv. Surprisingly enough, he lasted a long time. Personally, I thought he would surrender the city to the russists sooner. We are waiting for the criminal case to be opened. It is hardly possible to blame people for accepting humanitarian aid in an occupied city, but everything here depends on the position of the local authorities.

According to the City Council, about 170,000 people remain in Mariupol, some of whom are being forced to leave for moscovia. Also according to them, about 5,000 civilians and more than 200 children have died. Clearly, the numbers are very approximate.

A powerful cyber attack on Ukrtelecom was carried out today, due to which services to the population were temporarily suspended in order to support critical infrastructure. Because of this, for example, emergency phone numbers in Kharkiv did not work.

Enerhodar today held a rally in support of Ukraine demanding the release of the Deputy Mayor Ivan Samoidyuk. The muscovites found a Gauleiter there to replace him, deputy of the city council Andriy Shevchyk, who headed the “council of self-organization of the city.” It is easy to guess that this deputy is from… bingo! He’s from the “opezdezhe” (translator note: this is a derogatory reference to the Opposition Platform—For Life party)! Funny stuff.

Meanwhile, the collaborators from “opezdezhe” cannot decide whether they are smart or pretty. Initially, there were reports from (Vadym) “rabinovich” that the party’s activities had been suspended, that it was a party of peace, that war had come, and that he was helping Ukraine from Israel as best he could. Subsequently, this message was removed, replaced by another message that said the party’s suspension meant that the government was destroying democracy, blah, blah, blah. This party should be liquidated, and all its members should be thoroughly checked for contacts and cooperation with the muscovites. Every last member!

Three winners take the Darwin Award today (I can’t even…):

We thank our military for defending Ukraine. Let us help the defense forces of Ukraine, as well as volunteers, doctors, rescuers, and public utility workers. Let us support each other psychologically. The war will not end tomorrow, or in a week, and we must be ready for a long marathon. And we know that everything will definitely be, Ukraine!