On the one hand, Friday seemed even calmer than Thursday as far as the overall muscovite shelling of Kharkiv goes, but on the other hand, it’s hard to call it calm due to the massive shelling of the Kharkiv Tractor Plant neighborhood and the large number of dead and wounded.

I want to start by reassuring my readers that I’m fine, even though I’m writing my Friday report on Saturday morning due to certain circumstances.

Surprisingly, there was slightly less shelling than the day before. However, the geography of the shelling is expanding. For example, Sarzhyn Yar, one of the city’s favorite recreational destinations, was shelled in the morning, as were single-family houses near it. Some of the houses were destroyed or damaged, and there were fires. Elsewhere, the areas targeted didnt’ change: Saltivka, Selyshche Zhukovskoho, Pyatykhatky, Oleksiyivka, Pavlove Pole, Obriy, the Kharkiv Tractor Plant neighborhood. 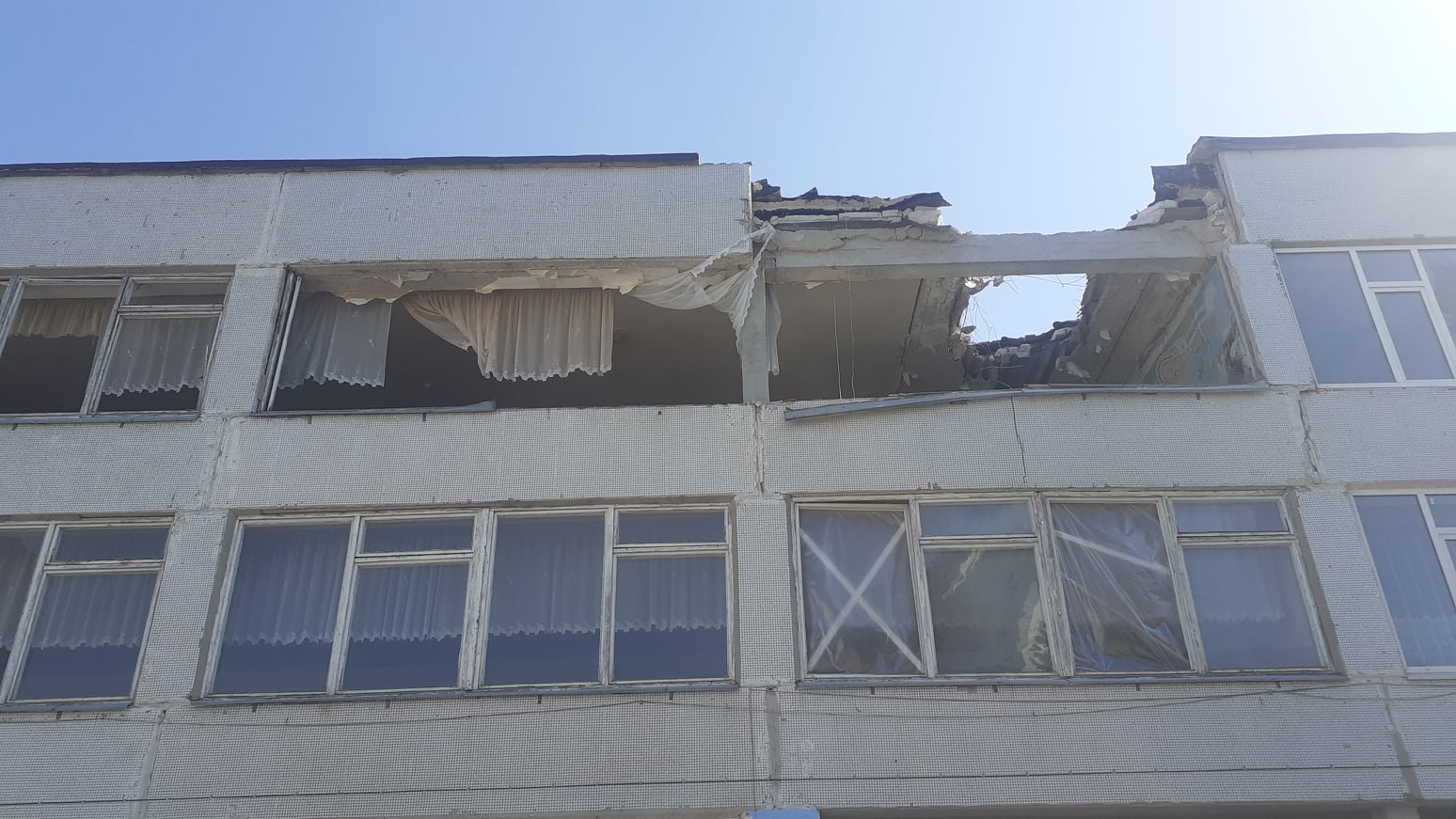 One of the partially destroyed schools in Kharkiv. Photo: Serhiy Petrov, CC BY-SA 4.0

The number of victims of the day’s shelling of the Kharkiv Tractor Plant neighborhood with a Hurricane multiple-rocket launcher became one of the city’s biggest tragedies. Relatively many people, including children, were out in the streets because of the nice weather. As a result of the shelling with cluster munitions, 10 people were killed. The number of wounded was either 35 (by the prosecutor’s office’s count) or more than 40 (by the medical staff’s count). A seven-month-old child was among the dead, and there were numerous children among the wounded. Unfortunately, due to wonderful spring weather, people have relaxed and forgotten somewhat about the safety rules. It’s been established that one of the victims died on her balcony when she went out for smoke. By the way, a few hours before the shelling, people noticed a drone landing in one of the yards. They called the police, who took it away. The yard was later hit with artillery fire.

The shelling of Sarzhyn Yar on Friday, together with the shelling of Gorky Park a little earlier, adds another type to the list of frequent targets in Kharkiv: parks, squares, relatively quiet areas, places of leisure, symbolic places.Yes, muscovites are striking symbolic places. In my opinion, such shelling is a response to the sinking of the missile cruiser “Moskva”, which was more than a cruiser, but a great symbol for the russists. For them, symbolism is very important (this again has to do with street names and places where monuments stand).

In my opinion, muscovites in the next few days may take revenge on Kharkiv, Kyiv, Odessa, other cities, and particularly Lviv, because of the loss of “Moskva”. Therefore, there may be massive shelling (like the shelling Kharkiv has been seeing), particularly in residential areas. So, to protect yourself, it’s advisable to wait a few more days before returning to big cities like Kharkiv.

A city cleanup was scheduled for Saturday, but it was a very bad idea from the beginning, because, among other reasons, the places where volunteers would gather were known. After the events in the Kharkiv Tractor Plant neighborhood, the city authorities ended up canceling the event, because it could have resulted in many casualties.

Out in the suburbs, Derhachi and the villages near it, as well as the town of Slatine, are being fired upon. They also shelled the settlements of the Solonytsi Hromada, killing one person and injuring two others. There are damaged houses. Shelling also occured in the Chuhuiv direction. Oleh Synehubov, head of the Kharkiv Regional State Administration, came to the town of Rohan (there is Rohan the neighborhood in Kharkiv, and then there the town of Rohan, the center of the Rohan Hromada in the Kharkiv region). Many media outlets had written that Rohan had been liberated. Well, look, it was not really occupied, although there were muscovite firing points set up on its outskirts, which controlled the route to Chuhuiv. Also, the village is constantly shelled by the russists (I think, they’re shooting from somewhere along the Starosaltivska route, from Shestakove or somewhere around there). One piece of evidence that it was liberated not today, nor yesterday was that power came back on in the village on Thursday. It was liberated from the muscovites at the same time as Mala Rohan, however, like in Mala Rohan and Vilkhivka, there was a long period of sweeping and clearing out of mines. The road to Chuhuiv was opened a week and a half ago, as well as the town of Rohan, standing opposite Mala Rohan. In short, our media screwed up, because fact checking requires a little bit of thinking, and thinking and just copying the news are two different things. (Apologies, this has been bothering me.)

The situation in the broader region is just complicated and tense. Fighting continues in the Izyum area, where our military is preventing the muscovites from advancing in the Slovyansk direction. Muscovites are failing in the Barvinkove direction, so they hit the town of Barvinkove and the villages of the Barvinkove Hromada with artillery or air strikes from time to time. Not far from Balakliya, soldiers of the 93rd Mechanized Brigade destroyed another shitty Ka-52 helicopter. The pilots were killed, and their rescue team also got their asses kicked. The shelling of Balakliya continues, resulting in one person being wounded. Evacuation continues from Barvinkove ​​and Lozova.

Massive shelling took place in the Zolochivska Hromada on Friday. Muscovites shelled the villages of Udy, Lyutivka, and Oleksandrivka. The russists shelled Lyutivka all day. A school and a state agricultural enterprise were destroyed there. In other villages, homes have been damaged and destroyed.  One person was killed and another was injured in the shelling. A total of eleven people died in the region during the day and seventy four were injured, including twelve children.

On Thursday, the russists shelled an evacuation bus near the town of Borova in the Kharkiv region, which is currently under occupation. As a result, according to the prosecutor’s office, seven people died and twenty seven were injured. Due to constant shelling and fighting, there is no gas in nine settlements of the Borivska Hromada.

The mayor of Kupyansk, Gennadiy Matsegora, who became a collaborator and cooperated with the occupiers, fled with his family to moscovia. Earlier, the mayor of Balakliya, Ivan Stolbovyi, did the same. You just wait: you will not escape from justice!

It’s come to light that over 51 days of resistance to the muscovite invasion 22 servicemen and one servicewoman of the 92nd mechanized brigade have been killed. In total, according to Zelensky, about 3,000 servicemen were killed and another 10,000 were wounded.

Fighting continues for Rubizhne and Popasna. Muskovities are shelling Severodonetsk and Lysychansk. In Severodonetsk, out of 130,000 inhabitants, about 20,000 remained in the city, and 70% of the city was destroyed. The muscovites have also had no success on the southern flank of the Joint Forces Operation area, near Vuhledar and Velyka Novosilka. But they shelled the town of Vasylivka near Zaporizhzhia, resulting in one person killed, and five injured, damage to houses and infrastructure.

In Mariupol, the Ukrainian military heroically continues to defend the city against the muscovites. Out of helplessness, the russists are already using strategic bombers. Long-range Tu-22M3 bombers fired missiles on the city, which did not bring significant success. In Mariupol, according to preliminary information, the muscovites have already completed the cremation of corpses lying on the streets and are now exhuming burials. Unfortunately, we will never know the exact number of people killed during the siege and destruction of Mariupol, because of the russists, who are doing everything to hide the real number of civilian casualties.

In occupied Melitopol, the russists are handing out leaflets, calling for the city to be rebuilt together with the occupying government, and for entrepreneurs to pay taxes. It also says that moscovia has come to these territories forever, and that they will never return to Ukraine. That’s a rather confident statement by the occupiers in my opinion.

On Friday, muscovite troops fired at least three times upon the border and military positions in the Snov community of the Chernihiv region. By the way, the first humanitarian trains will arrive in Chernihiv and Nizhyn on Saturday. In a very short time, the railways were able to repair tracks and bridges damaged due to fighting. These people are heroes of the rear and of security of Ukraine. In total, according to the Ministry of Infrastructure of Ukraine, about 300 bridges in the country were destroyed as a result of the muscovite invasion.

The muscovites confirmed that the missile cruiser “Moskva” had sunk after all. According to their version, it happened while the vessel was being towed, due to damage to the hull and bad weather. They do not admit that this was a result of two “Neptune” missiles hitting the ship. According to russist forums, one of the missiles hit in the area of ​​the S-300F air defense system (in the stern) resulting in detonation of ammunition and failure of the power plant, while the other landed in the bow of the ship, also causing detonation of ammunition. Detonation of two arsenals in different parts of the ship always almost means it’s 100% the end. And given the peculiarity of the layout of the project 1164 “Atlant,” there is no chance for “Moskva”. The Pentagon has already confirmed that the sinking of the flagship of the Black Sea Fleet of Moscow was a result of being hit by the Ukrainian “Neptunes.” By the way, the ship’s captain, Anton Kuprin, the one who delivered the “Russian warship” message to Snake Island, went to the bottom together with the ship. The exact number of dead on the ship is unknown, and there is speculation that there were more than 400 people. An unofficial public farewell ceremony with “Moskva” took place in Sevastopol yesterday. The russists are mourning, and the Ukrainians have victory at sea. A military operation by the occupiers at sea is no longer possible. Also, the cover of the muscovite troops in the Kherson region has now come under question. This is the first cruiser sunk in battle in 40 years (the last was the Argentine, in 1982, during the Falklands War) and certainly the largest and most powerful since World War II. Muscovites went down in history at least for that!

After Krasnohrad, the decolonization began in the village of Kehychivka, the center of the Kehychiv Hromada in the Kharkiv region. Kvitkova Street was renamed to Heroes of Mariupol, and a decision was made to dismantle the Gorky monument at the railway station in the village.

The areas where moscovia borders Ukraine are restless again. There was another bang recorded in Belhorod.

Today’s Darwin Award goes to Kadyrov’s’ TikTok troops, who are again having Mariupol drunks pose as captured soldiers, including an already familiar drunk from the Left Bank. Well, their battles with air and doors are already considered “classics.”