Today was another difficult day in Kharkiv. The city was hit with a Kalibr cruise missile, creating yet another set of victims. There was also shelling of a residential area, while the overall amount of artillery attacks fell significantly today, even compared with the daytime period yesterday.

In many parts of the city there were long intervals of silence—unusual silence. The russists were active in the morning and evening, while it was mostly quiet in the daytime. They fired upon various areas of Saltivka, the outskirts of Pyatykhatky, Selyshche Zhukovskoho, Oleksiyivka, and the Kharkiv Tractor Plant neighborhood. 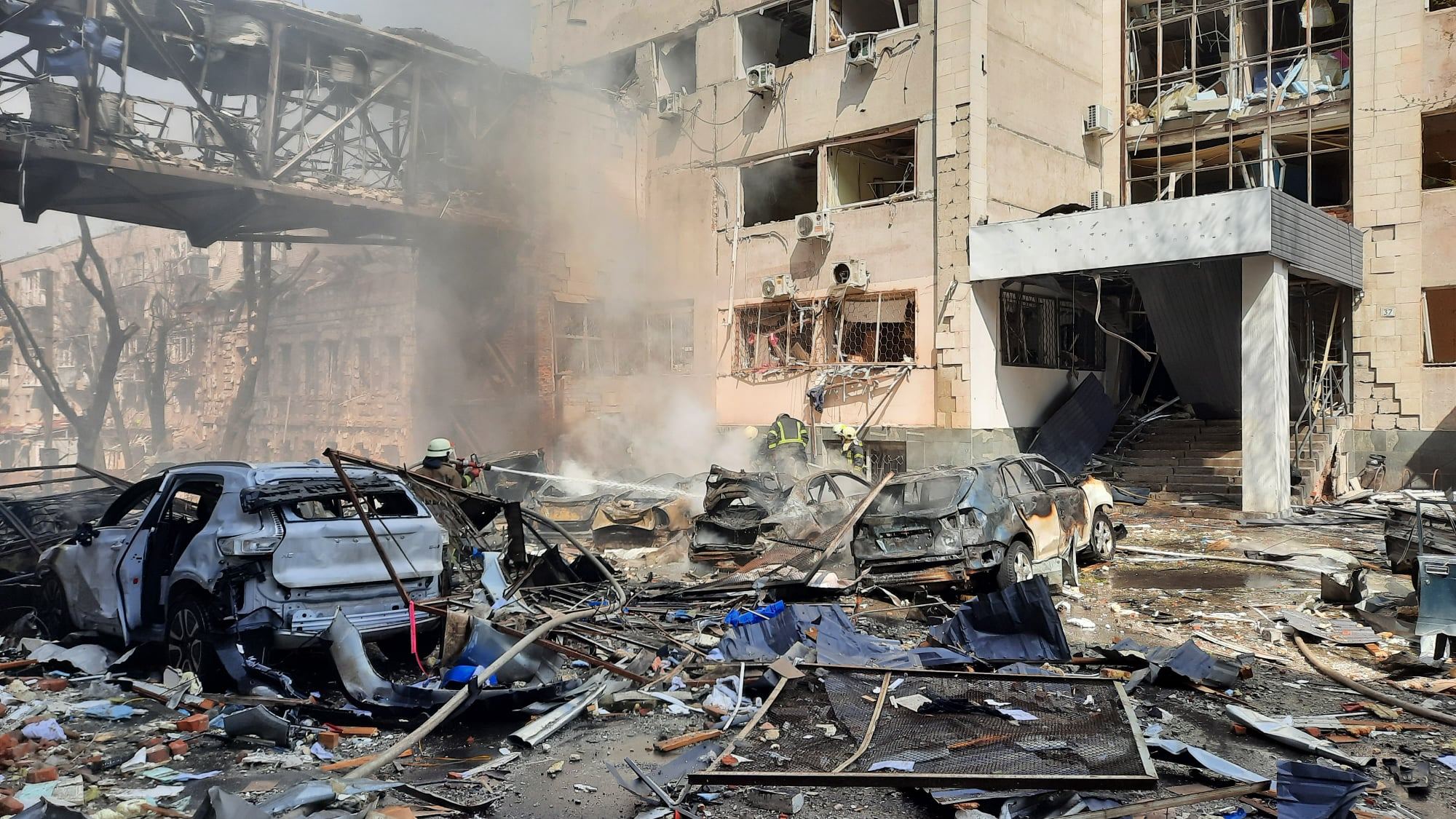 Main Directorate of the State Emergency Service of Ukraine in the Kharkiv Region. CC BY 4.0

The Kalibr missile was fired at the Kinnyi market area in the late morning. This is a fairly busy place. People were standing in lines to the shops, pharmacies, and then came a rocket strike. It damaged houses, the market, cars, and so on. Two people died. The number of wounded, according to the prosecutor’s office, is 18, while according to (Kharkiv) Mayor (Ihor) Terekhov, it’s 32. In the evening, the muscovites fired on the Kharkiv Tractor Plant neighborhood. A fire broke out, one person died, and two were injured. This evening it came to light that three bomb technicians were killed and four seriously injured by a cluster munition while demining territories near Kharkiv. Very sad news. This illustrates that walking along untested trails in areas of combat will be dangerous for a long time.

Yesterday and today again, the air raid siren went off for almost half an hour in the daytime. People were joking in local social networks that it no longer makes sense to stop the sirens; instead, it should just be recommended to stay in shelters all day. Of course, no one pays attention to the sirens. Still, such intensity of alarm in the city and the region is very telling…

Out in the suburbs, there was shelling of Derhachi and other settlements of the hromada. There was unrest in the Chuhuiv direction as well. There are about 40 apartment buildings damaged in Chuhuiv, as well as about 300 single family homes.

There is also good news. Journalists from TSN (translator’s note: this is a Ukrainian news outlet) reported that the villages of Bobrivka and Bayrak, located beyond the beltway on the Pivnichna Saltivka side, have been liberated from the muscovites. There is a secret military base there, which was destroyed by missile strikes on the first day. (Well, it’s not completely secret, as it’s well known that there was an air defense command post there). Also, according to TSN, battles are ongoing for the village of Kutuzivka (Starosaltivka direction). A quick comment: why did our military let it slip and bring in journalists before finishing cleaning up the area and executing the operation?

In Kharkiv, traffic lights have been on for several days on central streets and complex intersections. Drivers and pedestrians are getting used to them again. Over more than one and a half months without them, people are out of practice.

Out in the broader region, fighting continues in the Izyum area and in the Barvinkove direction. Also, as of today, the Borivska Hromada in the Kharkiv region has been completely occupied. There are problems with food, there is no communication. Looting and violence against residents by the occupiers continues. The ways to get from the territory of the hromada to territory controlled by the Ukrainian government are blocked. More than 50 people were deported from Izyum to Kupyansk and further to moscovia, which was actively covered by muscovite propaganda outlets.

Heavy fighting continues in the Joint Forces Operation zone, both battles are on the northern flank (Rubizhne and Popasna) with continuous shelling of Severodonetsk and Lysychansk. In the central part, there’s fighting for Avdiivka and Marinka, and in the southern part, fighting is ongoing in the area of ​​Vuhledar and Velyka Novosilka, in Donetsk region. In Mariupol, the muscovites demanded that our military surrender, but the city’s defenders refused. The muscovites fired upon the Lysychansk refinery, which has been closed for a long time, but there was a fire, because the remains of oil sludge were burning.

The night from Friday to Saturday was tense in Ukraine. There were rocket attacks on Kyiv, Poltava, Lviv, and other Ukrainian cities. It really looks like revenge for “Moskva,” and it looks like it will preoccupy the muscovites for a few more days. So take care of yourself

In the russist-occupied Tokmak in Zaporizhzhia there was a “bang,” and the personnel unloading an echelon of ammunition was annihilated. The same fate probably befell the ammunition. Looks like someone may have had a smoke in the wrong place again, like on the cruiser “Moskva.” Also in Enerhodar, the muscovites repainted the city entrance stella from blue and yellow to their tricolor. For them, symbolism matters and it makes a difference whose flag, whose language, and what school history program there are. By the way, teachers from the temporarily occupied territories will be re-trained by russists in the summer to follow muscovite school programs, so they can teach the correct and unified point of view and program.

Remnants of chemical weapons (sarin and other substances) left by the occupiers during their escape from the territory of Ukraine were found in the vicinity of the village of Bilky, of the Trostyanets Hromada in the Sumy region. In other words, the use of chemical weapons against Ukrainians en masse has been on the russist agenda—this is now it is a fact.

In Kherson, according to the ombudswoman Ms. Denisova, a “referendum” is being prepared for the creation of the People’s Republic of Kherson in early May. As if the ballots and protocols were already being printed. We know very well how these things are done. Occupier television is also already broadcast there, spreading messages of russist propaganda, for example, about “bioweapons labs” and everything else.

On April 15, commander of the large landing ship “Saratov,” Volodymyr Khromchenkov, died in a hospital in Sevastopol. The amphibious warfare ship was sunk by a Tochka-U tactical ballistic missile on March 24 in the port of Berdyansk. Khromchenkov is a traitor to Ukraine. In March 2014, he handed the Ukrainian Navy’s “Kirovohrad” amphibious warfare ship over to the muscovites, saying that the Ukrainian leadership had not contacted him. That was a lie. He had sided with the russists and continued his military career there. The traitor has now paid for his betrayal with his life. May the ground he’s buried in feel like concrete!

Today, the Darwin Award goes to muscovites in Zaporizhzhia (there’s so much news from there today!), who took from the locals what they thought was a fuel truck, which actually turned out to be a septic tank (tanker for pumping shit, for example, from latrine pits in homes). It seems that such equipment is not common in the russist cuts… It is not known whether the occupiers refueled their equipment with shit, but they put their marks on this miracle machine.

Let us believe in and help the defense forces of Kharkiv and Ukraine! Let us support volunteers, doctors, rescuers, and public utility workers. Let us support each other, at least with kind words! And we believe in Ukraine!