The amount of attacks increased compared to the day before. Again, houses, markets, and shopping centers were hit. The Kharkiv suburbs were targeted, too, particularly Derhachi, Chuhuiv, and Korotych. Elsewhere in the region, heavy fighting is ongoing in the Izium and Barvinkove directions.

The ruscists started shooting in the very early morning. The activity slowed down around lunchtime and then, after a brief pause, there was again a flareup of activity in the evening. Most of it was aimed at various parts of Saltivka—again there were fires at one of the markets and one of the shopping centers. The Kharkiv Tractor Plant neighborhood, Selyshche Zhukovskoho, Pyatykhatky, and Oleksiyivka were hit as well. 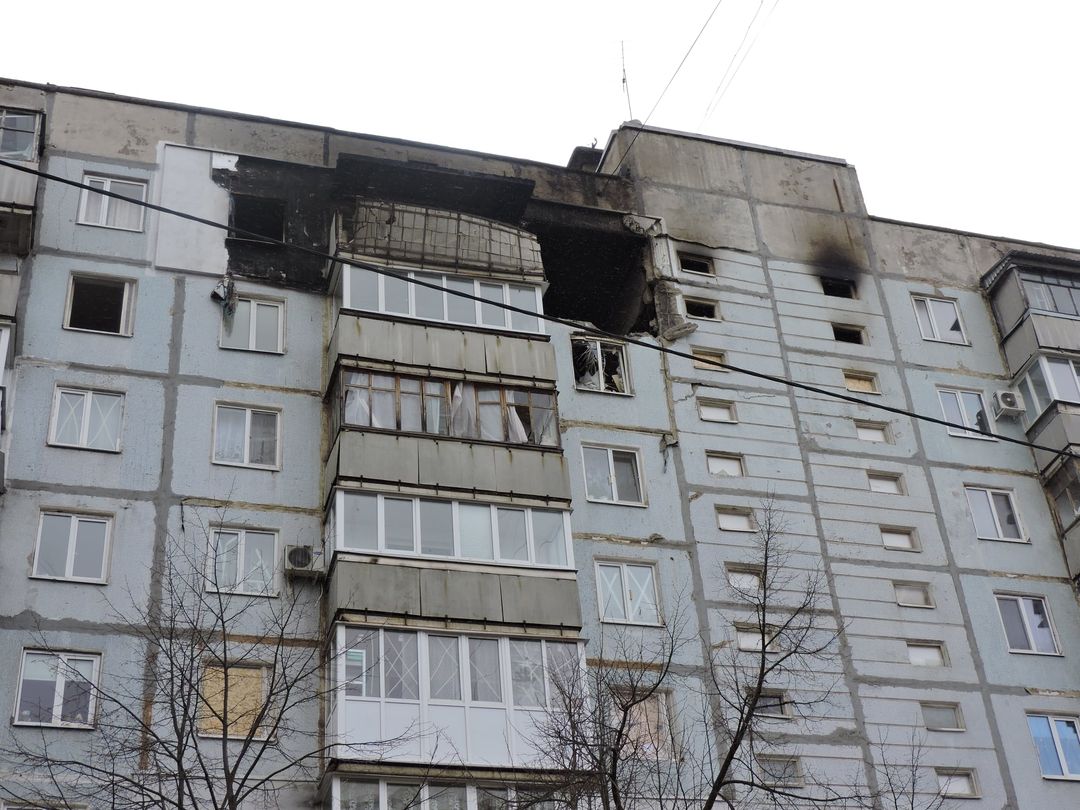 One of the seriously damaged buildings in Kharkiv. Photo: Serhiy Petrov CC BY-SA 4.0.

The situation in the suburbs hasn’t changed: Derhachi, the villages of the Derhachi Hromada, Chuhuiv, and suburbs in the Chuhuiv direction were hit. Also, however, the muscovites hit a Nova Poshta (New Post Office) terminal in the town of Korotych, in the Pisochnynsk Hromada. A fire broke out in one of the terminal’s buildings and four trucks were damaged. One person died and six were wounded as a result. Nova Poshta will not deliver to or from Kharkiv for the next two days. Some say it was a bomb attached to a parachute, although it’s also possible that it was a missile. The muscovites are aiming at hangar-type buildings, warehouses, and logistics hubs, because their goal is to make delivery of anything to Kharkiv problematic, to cause losses and hardship. Building safe logistics and existence of multiple options for that are the most important and most complex questions today for Kharkiv and cities in the rear.

According to the regional prosecutor’s office, the muscovite attacks on Kharkiv have so far damaged 191 educational institutions, including 93 schools, 84 daycare centers, 11 institutions for extracurricular and vocational education, and three education administration buildings. One school and three daycare centers have been destroyed completely. Elsewhere in the region, according to approximate estimates based on incomplete data, 45 educational institutions have been damaged, including 29 schools and 16 daycare centers. At least three of the latter and one of the former have been destroyed completely.

The city is living its life—it’s gotten used to the war (as much as that’s possible). The city government has started collecting requests for evacuation from Pivnichna Saltvka, Pyatykhatky, and Horyzont, although there’s no electricity in those neighborhoods, and communications are unstable. In truth, things like this should’ve been done a  lot earlier, either in the beginning or in the middle of March. People who have stayed in the basements of damaged or half-destroyed buildings are firmly refusing to evacuate. And this has become a sort of faith. Hence, these evacuation requests and so on, it all creates an appearance of action without solving the problem. Finally, instead of the less dangerous parts of the city, these people should be taken out of the city, so they can recover and not remain in a state of fear. They shouldn’t be kept in the boarding school buildings or similar. They should be taken to the southwest of the region, or all the way to Poltava, or even further, to western Ukraine. But nobody is thinking about such options, which is very unfortunate.

Cultural life has moved into the subway system. The Kharkiv orchestras (the National Guard orchestra and the opera theater opera) are playing at subway stations for people living there.

The Security Service has arrested one young bitch who came from the temporarily occupied territory and was feeding to the ruscists our military positions and guided their fire at the locations for distribution of humanitarian aid, educational and medical institutions, sites of commerce, and residential neighborhoods, particularly in the center of Kharkiv. It’s possible that last week’s attack on the center of the city was her handiwork.

Kharkiv has a new symbol of stoicism. A dresser with a coat hanger in one of the destroyed daycare centers has survived. It remained in place, unmoved, even though almost the entire floor slab underneath it collapsed. Our dresser is sending its greetings to the dresser with the picture of a rooster (already sent to a museum) in Borodyanka.

Elsewhere in the region, fighting is ongoing in the Izium area and in the Barvinkove direction. Barvinkove is constantly being shot at. As a result, one female resident of the city is dead and 10 houses are destroyed or damaged. At the same time, close to 1,000 people have refused to evacuate and remain in the city. However, because of the shooting, the situation with gas and electricity is not good.

Our military is beating back the muscovite attacks and burning their equipment, tanks and armored personnel carriers as well as artillery. It was on this territory that the 93rd Mechanized Brigade encountered the muscovite 64th Guards Motor Rifle Brigade (which includes the scum who took part in the mass murder, execution, and rape in Bucha and other Kyiv suburbs) and gave it a proper ass whooping. The ruscists lost personnel and equipment. They went to hell on Good Friday.

Overall, two civilians were killed and 19 wounded over the course of the day, according to the Kharkiv Regional Military Administration. Since the wide-scale invasion, 26 children were killed and 97 wounded. Across Ukraine in general, 208 children have been killed and 373 were wounded.

The situation has gotten difficult. The muscovites from the town of Borova, in the Kharkiv region, have gotten to the Donetsk region and fixed their positions in Lozova, of the Lymanska Hromada. Meanwhile, the town of Yampil and the city of Lyman, were shelled. A hospital in Lyman was damaged; in Yampil, homes and schools.

Balakliya Mayor Ivan Stolbovyi, who became a collaborator and subsequently left for moscovia, was charged with treason in a criminal case that was opened against him. A clarification came in about another collaborator: Kupyansk Mayor Hennadiy Matsehora. He spends most of his time in the city but travels to moscovia from time to time, probably to consult with top representatives of the occupier administration.

Battles are ongoing for Rubizhne and Popasna, in the Kreminna and Sieverodonetsk area. These cities are being shelled. Whatever evacuation is possible under the circumstances is taking place, although there’s no word about any humanitarian corridors. Similarly, battles are ongoing near Avdiyivka, Maryinka, Vuhledar, and Velyka Novosilka in the Donetsk region. The muscovites are actively attacking in the Huliaipole direction.

The defense of Azovstal continues. No humanitarian corridors are being provided, and our fighters are being pressured to surrender—supposedly to “save” the civilians, who obviously would be deported to moscovia by force. And so the fighting continues, and the city continues to be bombarded with air strikes.

Ukrainian government representatives are saying that occupiers continue disappearing in the Melitopol area. About 100 persons have disappeared so far. Also, a shell landed late in the evening in the Kherson area (but not in Chornobaivka) and allegedly hit a ruscist command center. That’s according to (Oleksiy) Arestovich (whose statements should be either divided by 100 or multiplied by zero).

In Melitopol, the occupiers gathered a “chlenin” (translator: a portmanteau, combining “chlen” a pejorative for “penis,” and “Lenin”) fanclub. Together they celebrated the birthday of the scumbag who, among other things, invented and created concentration camps. The nazis learned from the muscovite-bolsheviks’ experience when creating their own camps for “inferior peoples” during WWII.

According to Ukraine’s intelligence services, repressions against top muscovite commanders have begun. They’ve targeted the commander of moscovia’s Black Sea fleet and his deputy, the chief of staff; commanders of the 6th Combined Arms Army and the 1st Guards Tank Army (both participated in the storm of Kharkiv and suffered losses, while the 1st Army is still storming the Slovyansk direction).

To search for its sunken rocket cruiser Moskva, the ruscists sent the ancient rescue catamaran vessel Komuna, which was first launched back in 1913. There’s a small submarine onboard, which will be used to check where the cruiser sunk and what sort of damage it has. Oh, well… Let’s hope the rescue vessel doesn’t sink next to Moskva and become another underwater exhibit of Ukraine’s cultural heritage.

And now for something funny. In Zaporizhzhia on Thursday, our military shot down another shitty Ka-52 helicopter. There turned out to be a passenger hiding inside its electronics block: a mouse. I am sorry for the mouse that lost its life in the crash. I’m not sorry for the muscovites who were inside. This is essentially all one needs to know about aircraft maintenance in moscovia.

Today’s Darwin Award goes to Ukrposhta (the Ukrainian post office). At first they froze all online orders of the “Russian warship, go fuck yourself” stamp and then asked everybody to reorder. When they opened up reordering on an updated site, the site simply fell down. Long story short, it takes a long time to earn a reputation and only a single moment to lose it. Ukrposhta did release an updated version of the stamp, but, in my humble opinion, it’s just not the same.

Let us believe in our army and the Armed Forces of Ukraine! Let us support volunteers, medics, rescuers, and public utility workers. Let us help one another and know that everything will be, Ukraine!