There were very few muscovite attacks on the city today. The few that did take place resulted in wounded victims. There was a lot of shelling of the northern suburbs and a rocket attack on Krasnohrad; the literary memorial museum of Hrihoriy Skovoroda in the village of Skovorodivka was destroyed. The liberation of territories south of the city continues, while the situation to the southeast remains difficult.

The areas of Kharkiv that were hit today and on the previous few days include Pivnichna Saltivka and other districts of Saltivka and Velyka Danylivka. Sometimes other neighborhoods in the north and southeast of the city. Four people were wounded today.

Compared to the first months of the attack on Kharkiv, this is practically a vacation: the terror via shelling and the accoustic terror have generally stopped. This takes some getting used to. Many people are feeling what I was feeling after the muscovites were pushed back to Kozacha Lopan and the attacks on Kharkiv subsided a little: discomfort and embarrassment. But this feeling goes away in four to five days. Kharkiv is turning from being a city on the frontline to a city near the frontline.

Meanwhile in the northern suburbs, Prudyanka, Slatyne, and the village of Ruska Lozova, in the Derhachi Hromada, are under muscovite bombardment. But Derhachi itself, according to city officials, pretty much saw its first day without shelling. I hope such a day comes to Kharkiv, too, but unfortunately there hasn’t been one for 73 days straight.

The ruscists have also been shelling Bohodukhiv, where numerous trucks and an entrepreneur’s building burned down. (Vehicle fleets are also targets, albeit not major ones. Attacking them is part of the destruction of logistical capabilities.) Also under attack are Zolochiv and the village of Ivashky, in the Zolochiv Hromada, located right on the border with moscovia. Railroad cars have been damaged near the alcohol plant and the poultry farm located in the village.

The village of Korobochkyne, in the Chkalovska Hromada, was shelled; a woman was killed as a result. The Chuhuiv environs and the village of Kamyana Yaruha, in the Chuhuiv Hromada, were bombarded as well. It was historically a muscovite village; odnodvortsi used to live there. No significant damage or victims there, although there are some large funnels. There was also a rocket strike on infrastructure in Krasnohrad.

According to police, 633 people, including 29 children, have been killed in the Kharkiv region since the wide-scale muscovite invasion of Ukraine began. (This is just the number of known victims.)

Work was done to remove rubble from the ruined building of the national literary memorial museum of Hryhoriy Skovoroda in the village of Skovorodynivka, Zolochiv Hromada. The most valuable exhibits were saved (this was confirmed by both the museum and government officials). But some of the exhibits, particularly books, are either damaged or destroyed by fire. The building suffered huge destruction, but the walls remain standing, despite a direct rocket hit to the building. More than 200 years ago they knew how to build structures that would last for centuries. The plaster sculpture of Hryhoriy Skovoroda near the entrance also remained in place. Museum director Nataliya Mytsai’s son was working a shift in the museum when the rocket struck the building. He was somewhat buried by the rubble. I don’t know how to explain this, but it looks like the spirit of Skovoroda saved the boy. They didn’t just target the museum; it was an act of vengeance—for our military successes near Kharkiv, and for kicking off the change of toponyms that have to do with moscovia and muscovite public figures in Kharkiv, which the mayor announced Friday. This was a demonstrative and symbolic act of vengeance. Ruscists like to commit symbolic violence, because it has a much wider effect than physical violence. Can they keep hitting other museums? They can. They conduct targeted strikes on cultural centers and destroy and rob many museums. Anything can happen, and we should be prepared. 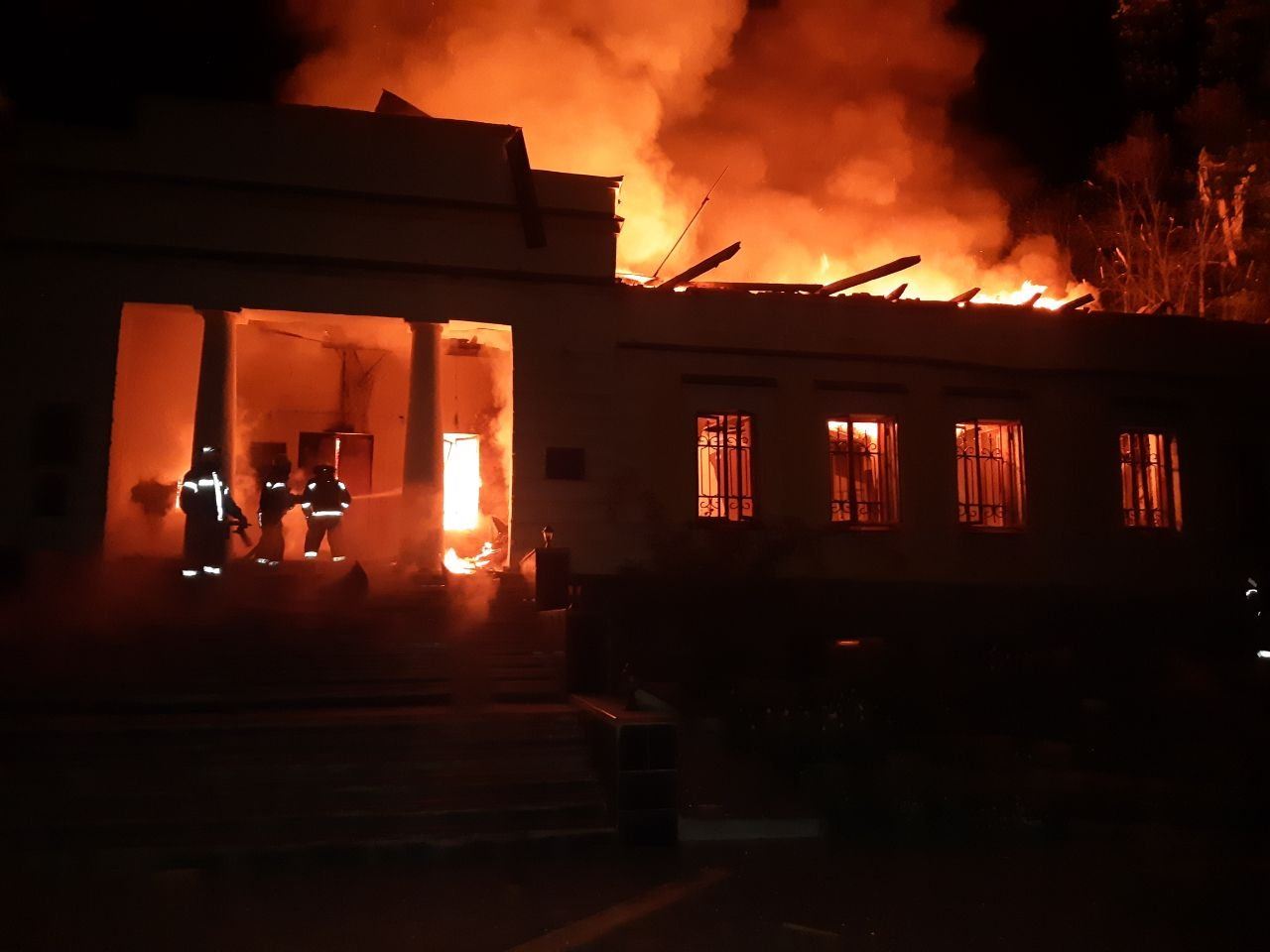 Fire at the national literary memorial museum of Hryhoriy Skovoroda. Photo: Main Directorate of the State Emergency Service of Ukraine in the Kharkiv Region, CC BY 4.0

There have been successes on the frontline. According to the General Staff, the muscovites have lost control of the village of Tsyrkuny, north of Kharkiv. There are rumors that other good news can be expected in the next few days to a week. According to official information, medics have driven several wounded local residents from occupied Ruski Tyshky and referred them to hospitals in Kharkiv (well, you understand). But the liberation of Tsyrkuny and Cherkasky Tyshky (this is already official) is very important. It is these territories that were used to fire short-range artillery and mortars on Kharkiv. We can softly shout “Hurrah!” because things will now get better for Pivnichna Saltivka and the rest of Saltivka, although this doesn’t mean the end of musvite shelling of Kharkiv.

Now for something funny. While in Tsyrkuny, Kadyrov’s troops stole a massive amount of pigs. Whoa, whoa, what do they need them for? (They’re Chechens, Muslims, whose religion prohibits eating pork, which means…)

We can say Staryi Saltov is ours. First, people are already calling from there and talking about the situation in the village (while its environs remain unsafe). Second, Eduard Konovalov, head of the Starosaltivska Hromada, has been arrested and charged with collaboration and treason. He was helping the occupiers, providing them with housing, and agitating for locals not to resist. Also arrested was Nadiya Antonova, secretary of the Vilkhivka village council, who helped the muscovites in Kutuzivka by providing hromada’s resources; outing veterans of the Anti-Terrorist Operation and Joint Forces Operation, hunters and law enforcement officers; and forced city residents to wear white armbands (which created problems at our checkpoints for those who wanted to walk to Kharkiv).

According to my sources, the occupiers did not commit any major atrocities in Staryi Saltov. At the same time, there were cases of people with a pro-Ukrainian position disappearing from the village. These were people who sabotaged the occupiers’ demands. Ther fate is unknown. Everything that could be stolen from the village was stolen. They even stole linoleum from recreational areas. The scale of destruction is impressive: everything has to be rebuilt from the ground up. People in the neighboring villages of the Starosaltivska Hromada (Fedorivka and Shestakove) barely survived, since no help came from Staryi Saltov; only local entrepreneurs helped people survive under the occupation.

The situation remains unchanged elsewhere in the region. Battles are ongoing in the Slovyansk and Barvinkove directions, and the city of Barvinkove is constantly being shelled. The situation is difficult, but stable and under control.

The muscovites are fortifying their defense lines in the occupied territories, including on the other line. We know that there’s looting happening. There’s limited selection of goods in the stores, and one can only take out cash in big cities, but not in all of them. For example, people travel from Borova to Svatove and Starobilsk (which are also occupied) to get cash. In preparation for the so-called “holiday,” billboards that say, “Congratulations on Our Victory Day!” were hung around Kupyansk. Power, gas, and water are seldom available in the occupied territories of the Kharkiv region.

The situation in other combat zones is difficult. The muscovites have already gained partial control of the village of Shandryholove, in the Lyman Hromada, are attacking the city of Lyman, and want to cross Siverskyi Donets in the Yampil area. According to the head of the Luhansk Regional State Administration, Rubizhne is almost lost; fighting is ongoing on its outskirts. Fighting is also ongoing near Sievierodonetsk and from other directions. Popasna is under attack. Ruscist aviation and rockets are hitting Bakhmut, Kostyantynivka, Druzhkivka, and Kramatorsk. Battles are also ongoing in the areas of Avdiyivka, Maryinka, Velyka Novosilka, Huliaipole, and Orikhovo.

Local battles are taking place in the Kryviy Rih and Mykolaiv directions. But there have been successes near Snake Island. First, our military did not sink or damage a single Admiral Makarov. Second, a Bayraktar drone sank a “Serna” type landing craft. Additionally, two Su-27 jets from the Ukraine Air Force—which has been “destroyed” for the third or fourth time—flew over the island and gave it a thorough bombing. All the buildings were destroyed, a ship of some kind was sunk, and there were obviously some losses among the muscovites. At a minimum, it looked beautiful!

In the occupied territories of Kherson and Zaporizhzhya regions, the muscovites find collaborators who agree to lead general education and art education institutions. According to the Zaporizhzhya Regional State Administration, the mayor of Tokmak, Ihor Kotelevskyi, who refused to collaborate with the muscovites, has died. They say it was a suicide, but we don’t know for sure what really happened.

Things aren’t calm in moscovia. Explosions were heard again over Belhorod, and forest fires are burning in Siberia. The fires are most intense in Krasnoyarskyi Krai, where they even approved a document about the necessity of supplying grain and other foodstuffs stolen from the occupied Ukrainian terrains. Everything is burning very intensely there. A dust storm started in addition to the fire. In many of the settlements, entire streets burn down. Meanwhile, most of the houses there are made out of wood, so they burn down very quickly, but there are no troops or firemen around—everybody has gone to the “special operation.” This is the sort of karma one gets for theft.

Today’s Darwin Award goes to a muscovite who was robbed by Kadyrov’s troops. They asked to enter the building and he let them in. As a result, they robbed him, taking even his service gun. He’s now been sent to do earthworks and given a week to find the gun or face trial.