Shelling of the city continues. The strikes are infrequent, hitting the northern outskirts. The northern suburbs are suffering more attacks, resulting in many fires. There are dead and wounded. Fighting continues to the north of the city. The muscovites want to regain lost ground, especially on the Lyptsi side. There was a powerful rocket strike on Lozova, where the palace of culture was destroyed and people were wounded. Kharkiv is restoring utilities, preparing to relaunch the subway.

Strikes of Kharkiv today were rare and low in intensity, a single shell at a time, starting in the early morning, right around dawn. This rushist tactic of the last two days is one they used in the early days of the invasion. The central part of the city is under fire, including Pavlove Pole, Oleksiyivka, Pyatykhatky, Selyshche Zhukovskoho, Saltivka, and Sortuvalka. They are firing rocket-propelled artillery of the Grad, Uragan, and Smerch types. A blast wave broke many windows of the hospital at Zaliznycnny Transport 1. In the evening there was another strike on the Barabashovo market, resulting in a fire.

Shelling is stronger in the northern suburbs: both of the Tyshkys, Tsyrkuny (there was an air strike), Ruska Lozova, Pytomnyk, Dementiyivka, Bezruky, Prudyanka, and Slatyne. Strikes are also aimed at Derhachi and the village of Mala Danylivka. Buildings of the Kharkiv Zooveterinary Academy were damaged and destroyed. According to the mayor, a woman was killed in the shelling of Derhachi.

Fighting continues to the north and northeast of the city. The muscovites are trying to recapture the positions they have lost, particularly on the side of Lyptsi, in the Tryrkuny direction. This effort continued for several days but was repulsed. Similarly, there’s fighting in the area of ​​Ternova and Rubizhne. It is too early to talk about the end of the battle for Kharkiv, but the muscovites have been pushed far away from Kharkiv, so the shelling has become less intense. 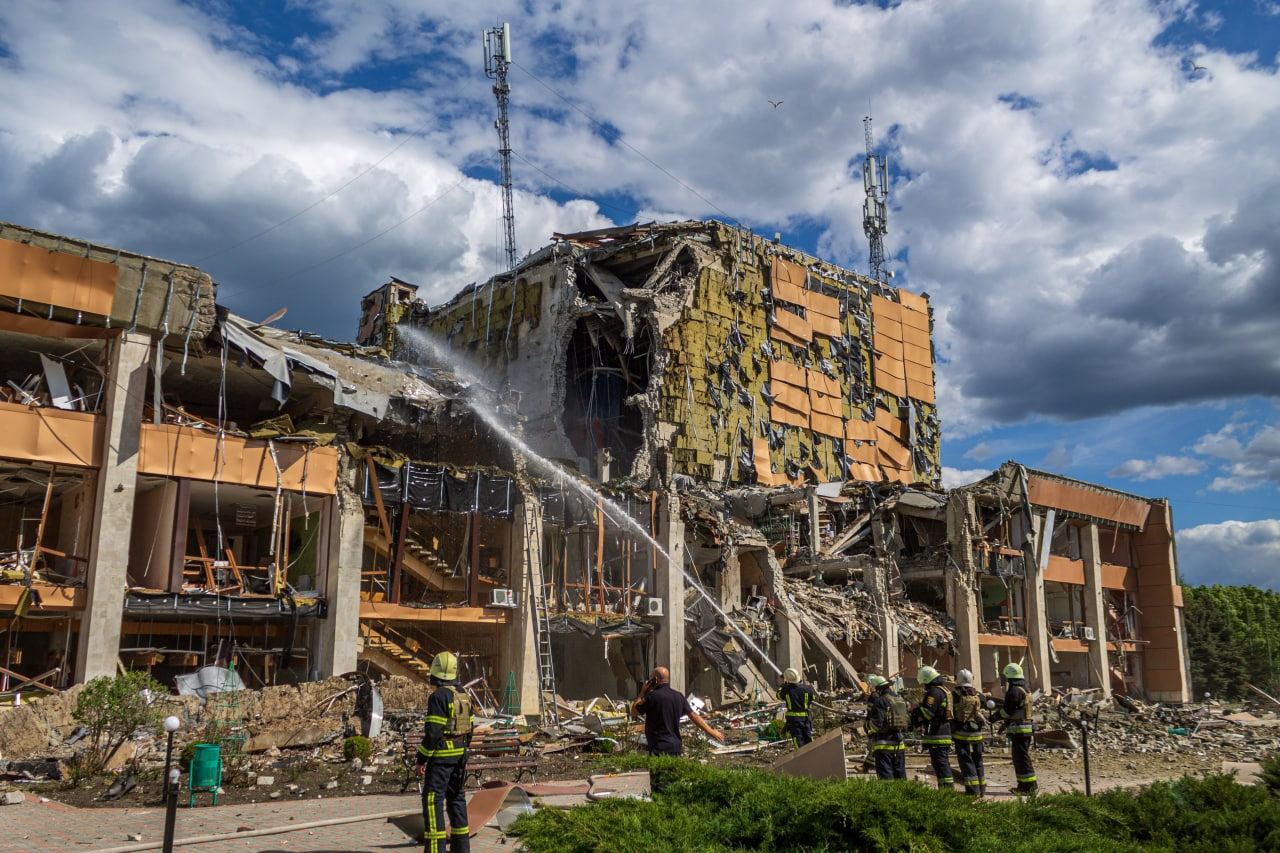 The destroyed palace of culture in Lozova. Photo: Main Directorate of the State Emergency Service of Ukraine in the Kharkiv Region, CC BY 4.0

Preparations for the relaunch of the metro are underway in Kharkiv. City authorities plan to launch it on Tuesday, May 24. Meanwhile, there are still too many people living in the subway.  City authorities have promised to settle them in student dorms and resorts. The fate of students’ belongings left at the dorms is unclear. Some people have written on social networks that students’ belongings are being dumped in some storage rooms. To be honest, this looks like an unfair and disrespectful treatment of students and their private property. Outside of the matters of martial law or urgent housing needs, the issue is the general attitude about  someone’s property, someone’s things.

The mayor also announced that construction of housing in the designated areas is about to begin. What actually happened was that Zhytlobud-1 announced it would unfreeze the construction projects that were stopped at the start of the large-scale invasion. (The cooperative had participated in a land scheme, in which plots of land were assigned to cooperatives and then handed over to developers with ties to the city government for commercial development.) From what I understand, some portion of the future apartments was acquired by the city government. To be honest, the quality of work done by Kharkiv developers is fairly low. Even the exterior tiles fall off buildings half a year after construction. So, Kharkiv needs not only new buildings but new builders as well, because the ones we have simply don’t know how to build.

Sickle-and-hammer decorations were removed from the fencing of the Kharkiv Bridge, located on the Heroes of Kharkiv Avenue. The name of the bridge is historical. It has been documented since the 18th century, because it’s a bridge over the Kharkiv River. Since 2016, activists have written numerous appeals to the city council asking to dismantle soviet symbols that fit the exceptionless decommunization criteria but did not get any response from the city authorities. But in 2022, six years later, this historical event finally happened!

Utility infrastructure is being repaired in the city. There are about 400 houses left to restore services to. Almost all residential buildings on this list cannot be connected to heat supply because of the destruction of heat and hot water distribution points. Reasons also include damage to supply lines in the northern parts of the city or damage to in-building lines caused by destruction of the buildings. For example, the latter applies to my house, where both indoor supply lines are damaged and faucets are broken from having been frozen. At the same time, where possible, city workers patch roofs to prevent flood of apartments during rains, which can lead to further destruction. Similar work has already been done on my house. Also, Pivnichna Saltivka is gradually being connected to the power supply.

There’s a plan to buy electric buses for Kharkiv, due both to the lack of fuel and to be more environmentally friendly. Kharkiv’s sister city, Nuremberg, should help with this.

We learned that on February 26, 2022, Kharkiv journalist, photographer, and activist Ihor Hudenko was killed. He took part in many actions, particularly environmental ones. For example, he was present at the Kharkiv coke plant trials. That day he rode his bicycle to film war damage on Natalia Uzhviy Street, which is next to the beltway. He was killed somewhere there. He did not return. All this time he was considered missing. It is very, very sad. We constantly crossed paths with him at various actions, because the world of activism in Kharkiv is quite small. The activists all know each other.

Since the start of the large-scale muscovite invasion of Ukraine, fifty people were killed and many were wounded by ruscist shelling in the part of Derhachi Hromada controlled by the Armed Forces of Ukraine. According to the mayor, approximately the same number of people were killed in the occupied territories of the hromada during this time. All public facilities and office buildings are either destroyed or severely damaged.

Bodies are being exhumed in the liberated territories, this time bodies of the occupiers. They were buried either by their own or by the locals (so that they would not stink). Some were killed by their own, probably for refusing to fight, or by friendly fire. Remember when in March a muscovite helicopter in the area of ​​Mala Rohan opened friendly fire on the ruscists? It’s hard work, which aims to establish their affiliation with the occupiers’ troops so that they could be exchanged for our soldiers upon request.

The bus route between Kharkiv and Zolochiv is about to start operating on Monday. A passport must be presented at boarding.

Fighting continues in the southeast of the region, in the Slovyansk and Barvinkove directions. Information is obviously scarce. The villages near the frontline are under fire.

In the afternoon, one of the three missiles that aimed at Lozova hit the palace of culture, which was overhauled last year. The concert hall in the building was designed for 1,067 spectators and is one of the largest in the Kharkiv region. Now the building is partially destroyed. The two other missiles were shot down by our air defense. The blast damaged about 10 residential buildings and injured eight people, including one child. The muscovites immediately started spreading information that they destroyed an ammunition depot with their missile strike. But the policies used by the ruscists include the destruction of healthcare, education, and cultural facilities, to make areas unsuitable for sustaining human life, making them depressed region without any prospects and without young people, parents, and children. Our team of documentarians has recorded many such instances of destruction of cultural institutions.

In the occupied territories, the muscovites are “having fun” by firing upon towns and villages. As a result, in the village Shevchenkove, the center of the Shevchenko hromada, three people were injured.

Yesterday Kharkiv rescuers caught a cat that got entangled in a thicket of grass near the river in the city center. People could not get to it because of the steep lined promenade. The rescuers saved the kitty, who ran away as soon as she got at the top.

Some funny stuff. The muscovite authorities are demanding that an article on the Russian invasion of Ukraine and on ruscism (“2022 Russian invasion of Ukraine” and “Rashism“) be removed from English Wikipedia. Otherwise they threaten to block the site. Block it already! How many more warnings do you need to issue! For those who aren’t aware, it is not technically possible to block a single Wikipedia article or a separate language section. If you block one page, you are blocking the entire Wikipedia for all language sections at once. Blocking the muscovite Wikipedia will be a shot in one’s own temple. It won’t be easy to get permission through the procedure for exclusion from the IP. In the end, everybody who is pushing ruscist theses will be filtered out. Consider this an insight.

Wikimedia Armenia has also received a warning. It has gotten many complaints from the Wikimedia Foundation: untimely reports, expulsion of people from the organization for contrived reasons, non-compliance with COVID requirements at events, and publication of personal data of minors. But this is not what’s important. One of the complaints is about holding “paramilitary gatherings,” or gatherings in Nagorno Karabakh, where they are very active. According to international law, that is territory of Azerbaijan, and “Wikimedia Armenia ” can only work internationally by recognizing the borders of Armenia or in partnership with a similar organization in a neighboring country. This is common practice; this is how we work with Wikimedia Poland. If the Armenians do not correct the large list of claims and demands from the Wikimedia Foundation in six months, they will lose their status of a regional branch, and will not be able to be called Wikimedia, receive funding, and much more.

It’s an interesting precedent. Should we start collecting evidence to deprive Wikimedia RU of its status? For organizing events in the occupied Crimea, for example.

More funny stuff. Several missiles fired by muscovites hit their targets yesterday. In the Odesa region, a beach toilet was smashed; in the Poltava region and in Mykolayiv, a lake and a pond were hit, respectively.

Even more funny stuff. In moscovia, the shortage of white tin used to make canned fish is expected to get bigger. Prices have already jumped by more than half, because of the sanctions. The only remaining supplier is from China. Canned food prices have already risen by more than 30 percent. They can’t even make tin, only scrap metal.

Today’s Darwin Award goes to the unit of the muscovite army that fortified a trench with bags of ammonium nitrate near the village of Ruska Lozova. It was detonated a little later. Looks like someone studied the chemistry textbook but did not receive even the basic household knowledge.