The northern outskirts of Kharkiv were shelled today. Shelling of the northern suburbs continues as well. There are wounded and dead. Shelling also continues in the eastern suburbs and other areas, such as Lozivska, Balakliyska, and Shevchenkivska hromadas.

The muscovites started firing on Kharkiv right at night. In the northern outskirts, Pomirki was struck, where a boiler building was destroyed and the oncology center’s surgery building was damaged, its windows blown out and interior damaged. The ruscists are deliberately targeting hospitals and energy generation stations, be they power substations or boiler rooms. It proves once again what we have written in our analysis report.

In the afternoon they hit both Pivnichna Saltivka and Selyshche Zhukovskoho. One person was injured in Pivnichna Saltivka. Unfortunately, it is dangerous to return to the northern outskirts of the city—it’s too early. Although I can understand those who are not able to rent housing in other cities because they’re out of money. But returning to those areas is a big risk, and it could stay that way until the end of the war. I have no information about specific strikes in the central part of the city, although the head of the Kharkiv region initially stated this.

The northern suburbs of Kharkiv continue to be shelled extensively. That includes both of the Tyshky, Tsyrkuny, Ruska Lozova, Prudyanka, Slatyne, Derhachi, and Mala Danylivka. An elderly man was killed as a result of the shelling in Tsyrkuny. There is always destruction and fire after shelling. However, because most residents of these villages and towns have left, the number of victims is small. 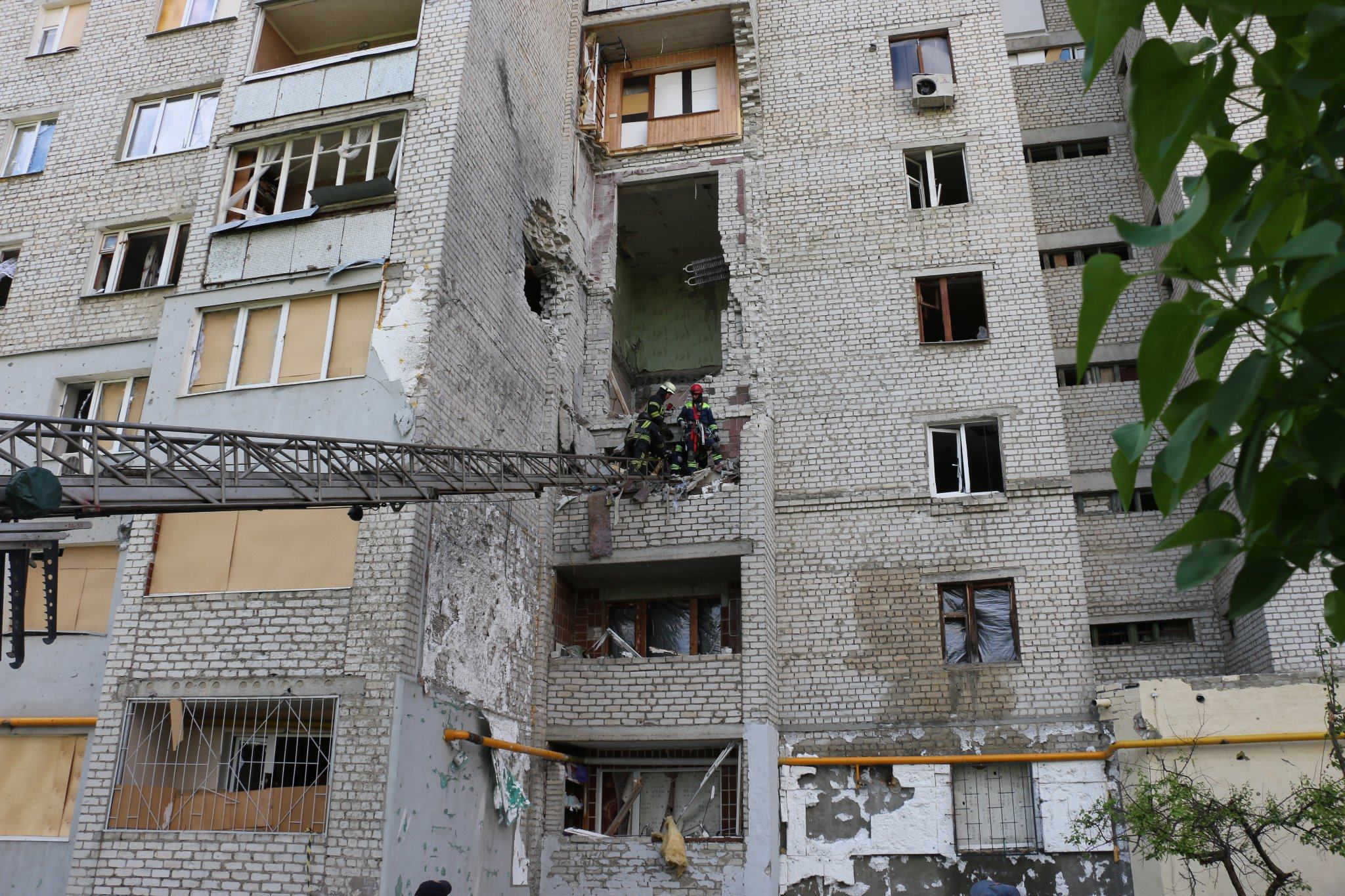 One of the damaged houses on the southeastern outskirts of Kharkiv. Photo: Main Directorate of the State Emergency Service of Ukraine in the Kharkiv Region, CC BY 4.0

There were also ruscist shelling of the Chuhuiv area; one person was injured as a result.

Fighting continues to the north and to the northeast of Kharkiv. The General Staff reports fighting near the village of Borshchova, north of Ruski Tyshky. The liberation of the village from the occupiers has not been officially announced yet. The muscovites are attacking the village Ternova, trying to recapture the village and prevent Ukrainian troops from controlling a part of the state border near the village. According to the General Staff, in two weeks since May 5, 23 settlements in the Kharkiv region have been liberated. I don’t know where this figure comes from, whether it is the total number since April or whether some villages have not been announced yet.

During the liberation of Ruska Lozova and the village of Pytomnyk (in the second half of April to early May) seven fighters of the Kraken unit were killed. Each liberated settlement comes with a high price.

The leaders of this special unit (225th and 226th Terror Defense Battalions), commanders Konstiantyn Nemichev and Serhiy Velychko, respectfully, are wanted by the Investigative Committee of moscovia. This is a recognition for successfully smoking the occupiers out of our land!

The regional authorities are once again urging residents not to go to the Sarzhyn ravine and Lisopark areas due to possible mines along the roads and in the woods. Unfortunately, mine danger is going to remain our reality for many years.

The main event of the day was the demolition of the monument to Oleksander Nevsky near the psychiatric hospital, erected in 2004. There’s a Russian Orthodox church dedicated to him nearby, and the monument itself was partially financed from its budget. What Nevsky has to do with Kharkiv and Ukraine is a good question. And almost all of his supposedly heroic biography, widespread in the USSR and moscovia, is untrue. However, the muscovites through their church occupied a symbolic space in Ukraine. Now we have gotten rid of this monument thanks to the troops. They pulled up a truck and a tractor to the site, knocked down the statue, and took it away.

A Darwin Award nomination goes to city officials who filed a police complaint regarding the disappearance of the monument. As I understand it, city authorities want to continue to fight the public and to increase social tensions in the city. Meanwhile, bomb shelters aren’t being equipped, and there are problems with distribution of humanitarian aid. The actual aid gets shamelessly stolen whenever the city officials have anything to do with it. They are looters, preying on others’ misfortune. Instead of doing their job, the city government continues fighting activists and planting flowers while waiting for money that can be stolen. It’s so brazen, they appear to be wanting a few troops to one day pay a visit to Terekhov to have a conversation.

The city authorities continue to resettle residents who are completely homeless from the metro. However, they are progressing slowly, moving just 30-40 people a day, when it was officially announced that there were a total of about 700.

The biggest problem in Kharkiv is that the lines to receive humanitarian aid are unreal. There are few distribution sites, and in many places the distribution process is not organized at all. Issuance of “packages from Zelensky” has been suspended because all the packages sent to Kharkiv have been distributed. Feldman joined the humanitarian-aid effort in recent days, after spending all his time writing pathetic stories about his Ecopark, while it was volunteers who were evacuating animals from the zoo. I suspect that later on he will be ripping his shirt on his chest, talking about how much he helped Kharkiv. But nobody heard anything about his help in the most difficult times. This is so that we don’t forget who was where during the most critical times for the city.

Today is Vyshyvanka Day and people wearing vyshyvankas could be seen around the city. One acquaintance walked around her neighborhood and made a little noise in one of the humanitarian-aid queues. She said vata (translator: pejorative for “Russians”) had drooped a little. This is not the only way. Vata reacts to the magic acronym SBU (Armed Forces of Ukraine) like devils react to incense. It’s a proper Kharkiv lifehack.

The liberated villages around Kharkiv are gradually recovering from the occupation. Some residents left and some stayed. They have not had electricity since the first day of the large-scale invasion; later they lost gas. People in the village of Kutuzivka, of the Vilkhiv hromada, hid in one of the shelters and ate once a day, cooking on a fire. They went through some tough times. In Tsyrkuny, at the end of March, several boys were taken away by the occupiers. Later, their mothers tried to find out about their fate in Lyptsi, where the muscovites had their headquarters, but they were not told anything. The boys’ fate remains unknown.

Since the beginning of the full-scale muscovite invasion, 26 people have been killed and about 60 injured in the Zolochiv Hromada. The shelling damaged about 700 buildings in the community. About 60% of agricultural lands in the Zolochiv region haven’t been sown due to shelling, destruction of farming equipment and buildings, and mines.

Exhumations of the remnants of people killed by shelling and buried in backyards are underway in the liberated villages around Kharkiv. Verkhovna Rada Commissioner for Human Rights Ludmyla Denysova is getting reports from victims of sexual crimes committed by muscovite troops, including children and elderly men who were raped. Two muscovites raped a two-year-old girl; a one-year-old boy died of rape; the occupiers raped a nine-month-old girl with a candle. The ruscists in Izium raped three nine-year-old girls in front of their mother. The girls sustained severe genital injuries. It’s the same in the Kharkiv region as in Bucha, in every village and settlement. Therefore, be mentally prepared for many, many similar news to come out of our region. This is what “ruZZkiy mir” (russian world) is like; it’s exhibiting all the signs of a genocide of the Ukrainian people.

In the Poltava region, the trial of two muscovite servicemen who shelled Kharkiv with the multiple rocket launcher “Grad” has begun. They admitted their guilt. (What else could they do?)

Fighting continues in the southeast of the Kharkiv region, in the Slovyansk and Barvinkove directions. The muscovites are shelling villages near the frontline, including the village of Hrushuvakha in the Barvinkove hromada. Also under attack were settlements of the Balakliya and Lozova hromadas; one person was injured in each. The muscovites are also shelling the occupied territories. They fired upon the village of Velyki Khutory in Shevchenkivska Hromada, where a woman and a 13-year-old child were injured.

According to the Borivka village council, a Su-34 fighter was shot down over the Kharkiv region on Wednesday. It fell into the Oskil River near the village Pidlyman in Borivka Hromada. In the occupied territories of Borivshchyna information is being spread that it’s now a territory of either the so-called Luhansk People’s Republic or the Belhorod region. (Looks like the occupiers haven’t yet decided which). They also plan to shoot propaganda materials for the “liberated population” on how to live well under occupation in the temporarily occupied territories of the Kharkiv region.

The title of Hero of Ukraine was posthumously awarded to Captain Serhiy Parkhomenko, commander of the aviation unit of the 299th Tactical Aviation Brigade, who was born in 1997 in Kharkiv and graduated from Ivan Kozhedub Airforce University. Since February 24, he took 38 combat flights, destroying more than 20 tanks, more than 50 armored combat vehicles, 55 transport vehicles, 20 fuel tanks, and several hundred muscovite soldiers and officers. He was killed on May 14 near Huliaipole during another combat mission. They said goodbye to him in Vinnytsia on May 18.

Heavy fighting continues in the area of ​​Lyman, Sievierodonetsk, and Popasna. In fact, this is one of the decisive battles in the Donbas, which will determine the nature of the summer campaign in the area of ​​Slovyansk, Kramatorsk, Bakhmut, and Konstyantynivka. By the way, one of the occupiers wrote on social media that the part of the population of Popasna that remained in the now occupied city did not rejoice in the “liberation” and were hostile to muscovites. He said they would teach them to love “ruZZkiy mir.”

Things aren’t quiet in moscovia. First, there were more explosions in the area of ​​Belhorod. There were also explosions in the border areas of the Kursk region. Allegedly, Ukrainians fired on a distillery in the village of Tiotkino, as well as the villages of Alekseevka and Dronovka. There are no casualties or injuries. The muscovites confirmed that after this they fired on the territory of Ukraine. They made a provocation and then wandered across the territory of Ukraine.

Repressions against military commanders have begun in moscovia. This information is finally confirmed by British intelligence. I did not write about it before. Chief of General Staff Gerasimov seems to remain in office.  Rumor has it that Putin now makes decisions at the tactical group level. Vice Admiral Igor Osipov, who commanded the Black Sea Fleet of moscovia, was removed from office due to the loss of the missile cruiser Moskva. The commander of the 1st Guards Panzer Army, Lieutenant General Sergei Kisil, was also fired for failing to seize Kharkiv. Pleased to announce that the suburbs of Kharkiv have become a grave for many elite tankers of the 1st Tank Army of moscovia and a major problem for the future career of their commander.

Today’s Darwin Award goes to Roscosmos, which launched the military optical reconnaissance satellite Cosmos-2555 with the Angara 1.2 rocket carrier from the Plesetsk cosmodrome. However, this muscovite “miracle” never went into orbit and in the morning of May 18 stupidly burned down in the upper layers of the atmosphere.

Let us thank our Armed Forces! Let us support volunteers, doctors, and rescuers. And everything will be, Ukraine!