The muscovites continue to fire upon Kharkiv. Today, for the first time in a while, an Uragan rocket landed in Pavlove Pole, hitting a public transport stop. The ruscists sent their regards to mayor Terekhov, who in my opinion relaunched public transportation a little too early. One person was injured; there are broken windows. This is what I was afraid of. The city authorities decided to relaunch transportation too soon after shelling of the city had decreased. There were also strikes in Pivnichna Saltivka and Velyka Danylivka, some of the nearby districts of Saltivka, as well as Pyatykhatky. The intensity of the shelling is very low, but, unfortunately, things haven’t been as quiet as they were for those few days in the middle of the month. There were strikes in Kharkiv before midnight, but I have no exact information on those. I confess, I just slept and heard nothing.

Shelling continues north of the city, though not very intense. The muscovites are shelling Ruski Tyshky, Cherkaski Tyshky, Tsyrkuny, Pytomnyk, Ruska Lozova, Cherkaska Lozova, Lisne, as well as settlements of the Derhachi Hromada: mainly Slatyne, Prudyanka, and Derhachi. The village Pytomnyk is badly beat up and destroyed. The ruscists also fired upon the villages of Svitlychne and Udy, in the Zolochiv Hromada, and in the Chuhuiv district. 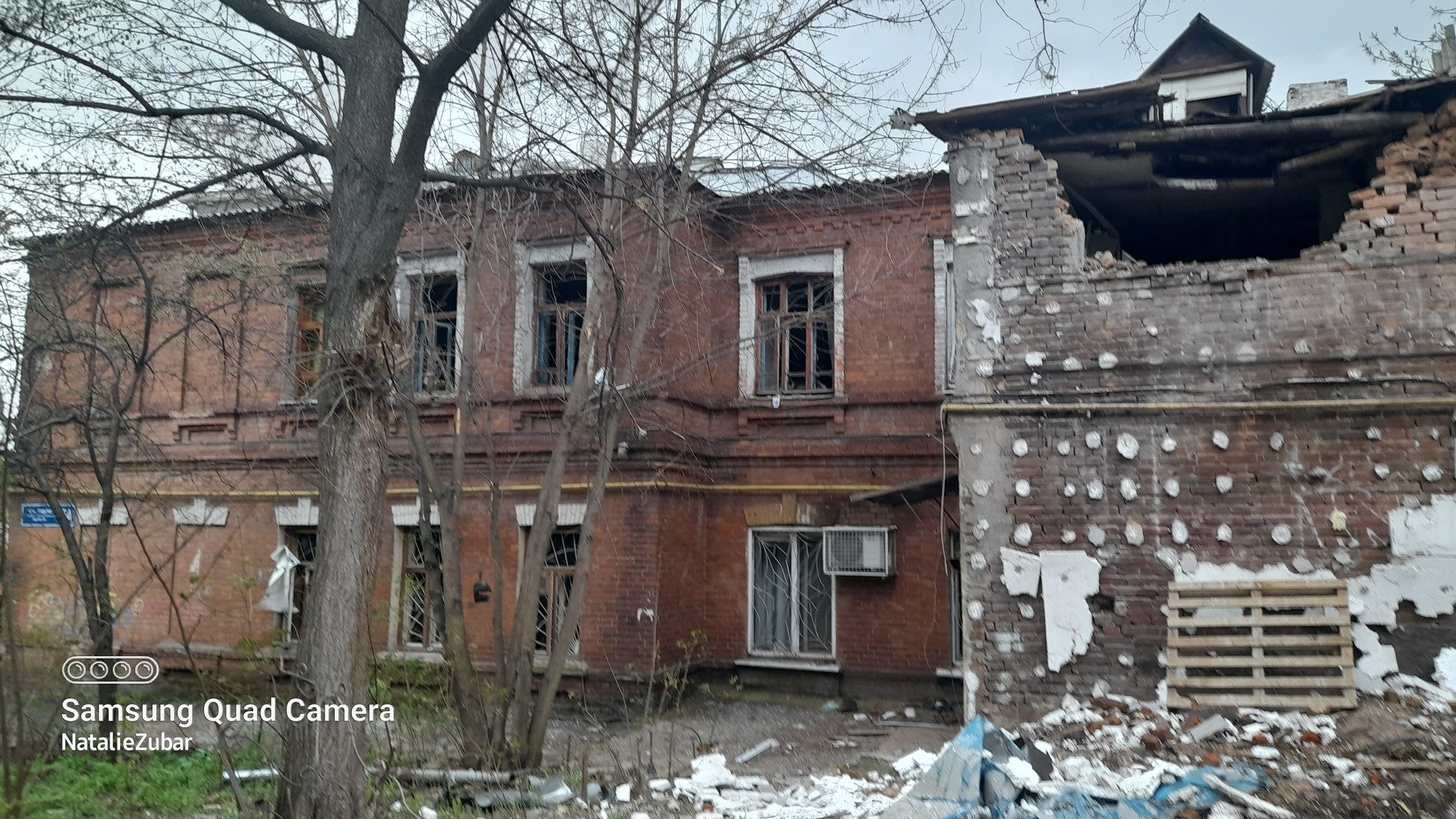 One of the buildings damaged in the shelling in the center of Kharkiv. Photo: Natalia Zubar, CC BY-SA 4.0

At night, along with the strikes in Kharkiv, there was a strike around the City of Merefa (south of Kharkiv). There is already a video online of the missiles being launched from the Belhorod region.

Fighting continues north of Kharkiv, as does the battle for the village of Ternova in the Lipetsk Hromada. The Ukrainian military is holding back these attacks, although the ruscists have introduced reinforcements in this area.

According to city officials, 3,482 residential buildings have been damaged and destroyed in Kharkiv as a result of muscovite shelling. Among them are 2,482 apartment buildings and 1,000 single family homes and houses belonging to coops. Additionally, 492 buildings cannot be restored. Curiously, that number was 491 just yesterday. I will add that there were no inspections done of most of Saltivka’s buildings yet. These look like announcements that are being made in order to secure an allotment of a large flow of money. Meanwhile, the city authorities cannot even be bothered to resettle people living in the subway.

People are returning to Kharkiv. And this is very noticeable. Following public news feeds on social networks, many people thought the city was already quiet and peaceful, since there were no more reports of constant shelling. The topic of quiet was very actively peddled by a number of public news outlets. Also, locations of the strikes are not very well reported as a matter of security. Indicating the exact location of an impact helps muscovites correct their aim. This I hear confuses some folks. Well, what did you expect? They’ll continue shelling Kharkiv until the end of the war, just because they can. You have to get used to it. I’ve heard that taxi drivers ask people why they’ve returned, telling them that it’s not very farsighted. This is expressed especially bluntly to women.

On May 24, 89 days after halting service, Kharkiv metro resumed its work. At the beginning, the intervals between train arrivals will be about half an hour, but they will be adjusted later depending on passenger traffic. Not all stations will be open for entrance. Some will be just transfer stations, without access to the surface, and on the Saltivka line trains will go only to the Akademika Barabashova station. The other three stations that serve Saltivka will not provide transportation. The decision is quite correct, given the security situation and the fact that not all people have been relocated from these stations. (This is particularly true of the Heroiv Pratsi station.) The metro is scheduled to run from 7 am to 7 pm, as are other types of public transportation.

The metro administration has a rather strange position on using the metro as a shelter. Using it as a shelter is allowed only until 9 pm (before the start of the curfew). This is especially strange for stations in Oleksiyivka, which still gets shelled from time to time.

The ground infrastructure of the metro has been shelled and damaged for almost three months. Transport depots are one of the targets for muscovite artillery and missiles.

One of my acquaintances has told me that teachers at a school in one of the northern districts of the city were directed by the district department of education late last week to hold a European Day celebration with students and provide a photo report. This is when most children have left with their parents and there are no teachers left. They want a photo report. Forget safety and everything else. This is typical for the education sector, which is willing to come close to criminal negligence in a frontline city just for a check mark. It looks like all education officials need to be given a security lecture and taken on a tour of the shelters of Kharkiv’s educational institutions. They need to talk to the people who lived in those shelters about how well equipped they are. I guarantee, they will hear many interesting things. And then the shelter doors need to be locked, so these officials cannot escape.

In Cherkaska Lozova, a team of Kharkivoblenerho repairmen came under muscovite fire while working to restore electricity supply for the village. Fortunately, they were unharmed and their equipment was not damaged.

Exhumation of civilian victims of the muscovite occupation continues in Mala Rohan. One man died when he went out to the yard after the shooting had stopped. One round from a machine gun pierced the gate and hit him. And another man died when driving humanitarian aid from Kharkiv to the village. On the way, his car met with ruscist tanks, and one of them fired practically next to the car. His parents then collected his remains from the car and buried him in the yard. Some foreign journalists are surprised by the single-person burials here, as Bucha or Borodyanka were places of mass casualties. Well, Bucha is a city, Borodyanka is a large urban-type settlement, while Mala Rohan, Vilkhivka, and others are villages. Up to 150 people remained in Mala Rohan, and so far some 10% of them are estimated to have been killed during the month-long occupation.

Uzhhorod native Sergei Maksimov, commander of the 138th Motorized Rifle Brigade of the 6th General Army of the Western Military District of the Armed Forces of moscovia, has been named suspect in the following crimes. On March 26, 2022, during the Ukrainian operation to liberate the villages of Mala Rohan and Vilkhivka, he gave an order to fire on residential buildings in these villages using the TOS-1 “Buratino” multiple rocket launcher. As a result, residential buildings, the Mala Rohan Lyceum, and industrial facilities were damaged and destroyed. A 13-year-old girl was seriously injured in the shelling and later died in a hospital on March 30.

A local resident and a muscovite soldier were detained in the liberated village of Shestakove, of the Starosaltivska Hromada. The muscovite pretended to be his son. According to the occupier, he escaped from a tank and came to the locals, who sheltered him. The muscovite gave away his uniform and weapons, received clothes, and helped with the household chores. The local resident said he did not hand the occupier over to the Ukrainian military because he feared they would shoot him along with the muscovite. The ruscist himself wanted to go to his grandmother in Kryvyi Rih after the war. Both are now under investigation, with criminal proceedings open under the article of aiding and abetting an aggressor state.

Fighting continues in the southeast of the Kharkiv region, in Slovyansk and Barvinkove directions. The muscovites continue to fire on surrounding villages, including Husarivka, Chepil, and Studenok. There is also shelling in the occupied territories, such as Balakliya.

In Lozova, the losses are being estimated after a missile strike on the Palace of Culture on Saturday. About 50 residential buildings, with more than 1,000 apartments; 11 educational institutions, including five schools; two medical institutions; as well as housing and communal services were damaged. Most of the damage consists of broken glass. The ruins of the destroyed palace of culture are beginning to be dismantled, which will take a long time given the scale of the destruction.

A comment regarding President Zelensky’s statement that this is “not a good time” to fight plagiarism in education: the problem is that the Minister of Education of Ukraine is a certified plagiarist. Serhiy Shkarlet’s dissertation and articles are officially recognized as plagiarism. But, because this is a person from the Office of the President, it’s not a problem and should be forgotten, because this is “not a good time.”

As soon as the exchange of Azovstal defenders (in fact, they were ordered to surrender) got hung in the air; as soon as our troops fighting in Sievierodonetsk came in danger of being surrounded; as soon as business owners started demanding a removal of the outspoken marxist Danylo Hermantsev from influencing economic decisions; and as soon as students start asking questions about plagiarism by the Minister of Education (for which this is not a good time because unity), they surface Medvedchuk, who starts explaining how he was not directly involved in the diesel and coal schemes (that he was just a middleman), and neither was Akhmetov (whose power plant used the coal), and that the only person who organized everything and profited from it all was Poroshenko. Too soon has politics returned to the Kyiv Hills…

Time magazine included Valery Zaluzhny, Commander-in-Chief of the Armed Forces of Ukraine, among the top 100 most influential people in the world, in the “Leaders” category. In an article about Zaluzhny, US Chairman of the Joint Chiefs of Staff General Mark Milley, wrote that he had shown himself to be the military mind his country needed, and that his leadership enabled the Ukrainian Armed Forces to adapt quickly by taking the initiative on the battlefield against the Russians. This is a very high but fair assessment!

Today’s Darwin Award goes to a resident of the Belhorod region, who found remnangs of an RPG at the border with Ukraine, near the Oktyabrskaya village in the Belhorod region. He gathered them and came home. There he lit a fire and began to melt the jet engine. Needless to say, an explosion followed, and the genius went to a Kobzon concert. (Translator: Iosif Kobzon is a late popular Soviet-era singer.)