July started off relatively quiet. The entire day would have been quiet if it wasn’t for some minor shelling of the city and its suburbs in the evening, hitting Pyatykhatky, selyshche Zhukovskoho, and Pivnichna Saltivka. The muscovites shot a few rockets at Kharkiv between 10 pm and 11 pm, which were destroyed by missile defense systems, according to notifications in Kharkiv Telegram channels. However, the muscovites did hit their target—rockets came at 4 am on 2 July (this is something new in their tactics, although I had been waiting for it and even wrote about it in an earlier chronicle; the psychological terror is picking up in intensity and becoming more diverse in terms of time intervals)–but more on that in the next chronicle. According to Oleh Synehubov, head of the Kharkiv Region Military Administration, 99 percent of the strikes on the city are conducted using rocket artillery, mostly Urahan and Smerch. That’s accurate overall (as far as Kharkiv is concerned), although the muscovites can reach the northern surroundings with cannon artillery from time to time.

The shelling of northern and eastern suburbs of Kharkiv continues, targeting Ruski Tyshky, Cherkaski Tyshky, Tsyrkuny, Pytomnyk, Nove, Ruska Lozova, Cherkaska Lozova, Dementiyivka, Bezruky, Prudyanka, Slatyne, and Derhachi. Even though the amount of strikes on Derhachi has gone down (the attacks mainly concentrate on villages near the frontline), a fire broke out in Derhachi in the evening due to shelling, leaving a portion of the city without power.

The muscovites are also attacking Zolochivska Hromada, particularly the towns of Zolochiv and Udy. They’re also attacking northeastern and eastern Kharkiv suburbs, including Peremoha, Zamulivka, Rubizhne, Verhniy Saltiv, Staryi Saltiv, Molodova, Pechenihy, Bazaliyivka, Korobochkyne, Velyka Babka, Malynivka, and Mospanove. Additionally, according to the General Staff (of the Armed Forces of Ukraine), the muscovites conducted airstrikes near Verhniy Saltov, Prudyanka, and Mospanove. Overall, one person was wounded as a result of the attacks in the Kharkiv district.

Fighting continues to the north and northeast of Kharkiv, and the ruscist troops once again attempted to storm the village of Dementiyivka, but their attack was repelled. 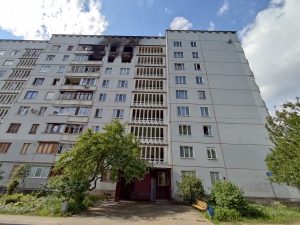 One of the damaged buildings in Northern Saltivka. Photo: Yevhen Tytarenko, CC BY-SA 4.0

After the city legal department’s response to Kharkiv Regional Council deputy Halyna Kuts’ request to take USSR emblems down from the City Council building spread on social networks, the City Council started backpedaling. (About 70% of users supported this idea when surveyed on Telegram channels.) City Council spokesman Yuriy Sydorenko said that the response was that of the legal department, whose opinion is different from that of Terekhov, who thinks that elements of the communist past and of the aggressor nation have no place on the City Council building, which was damaged as a result of an airstrike on the center of Kharkiv on 2 March 2022. I’m curious then, why were all the appeals by the public ignored from 2016 until February 2022? Why were they met with all the weird responses for almost six years? Terekhov was the first deputy of the previous mayor, Hennadiy Kernes (who had joked about Covid before dying from it), secretary and acting mayor from December 2020 to November 2021, and mayor starting in the fall of 2021. It’s also come to light that Terekhov has ordered the removal of USSR emblems from the building and promised to replace the biggest one with the coat of arms of Kharkiv, a Hero City.

And what do you know, around 4:30 pm work on the building had already started. But instead of removing the emblems, city workers started hiding them, temporarily covering them with white fabric. The removal will be done “as soon as possible.” There are a total of nine soviet symbols on the building.

But there’s one small problem with the coat of arms, which is that mayor Terekhov doesn’t know the history of Kharkiv and Slobidshchyna, and even if he does know certain fragments of it, they are very selective, in the context of muscovite-oriented discourse. Kharkiv’s current coat of arms—the cornucopia with the serpent-entwined caduceus and a green background on a French heraldic shield—isn’t exactly Kharkiv’s historic emblem but rather part of its imperial legacy. It first appeared in Sherbatov’s Heraldry in 1775 as the coat of arms of the Kharkiv Regiment. It was established as the emblem of Kharkiv by an order Katherine II issued on 21 September 1781, following the creation of the Kharkiv viceroyalty. There are some mentions that this emblem may have existed even earlier, but without any substantial evidence. Instead, Kharkiv used to have a different emblem and coat of arms: a black drawn bow with an arrow on a yellow background (probably adopted from Ivan Sirko’s family coat of arms). Many Ukrainian researchers indicate that this emblem had existed before the liquidation of the Slobidshchyna regiments in 1764, and that Yevdokym Shcherbinin, who was the liquidator of the regiment system in Slobidshchyna, had proposed making the cossack city’s oldest, historical coat of arms the emblem of Kharkiv. In my opinion, we must say goodbye to the imperial legacy once and for all and return the old cossack coat of arms from the time when Kharkiv was a fortress city. That would be especially appropriate now, as it’s once again become a fortress and a shield from the muscovite horde.

Because the City Council made a gesture of goodwill as far as soviet symbols are concerned (backpedaling after much criticism), the same will happen with Pushkin. Especially if one remembers that on 1 November 1904 the secret organization Defense of Ukraine, whose ideologue was Mykola Mikhnovskyi, tried to blow up the Pushkin statue, but the explosives failed and the only damage was more than 100 broken windows in the surrounding buildings. The organization clearly stated that there must not be any monuments of foreigners in the forcefully taken territory of Slobidska Ukraine, whose traditions reach all the way back to the glorious times of hetman Bohdan, and that Pushkin in his poem Poltava had falsely depicted hetman Ivan Mazepa. This is why mayor Terekhov needs to learn the real history of Ukraine’s Kharkiv instead of the gelded imperial narrative. I am prepared to give the mayor a small lecture. Finally, it’s worth opening the chapter in Dmytro Bahaliy’s History of Slobidska Ukraine that’s dedicated to Kharkiv’s history called Kharkiv as a Ukrainian City. By the way, the Karazin University history department has offered to organize a discussion of the Pushkin question among activists, historians, and local government representatives. Whether such a discussion will take place is a rhetorical question.

Every Friday rescuers conduct training on first aid and safety during shelling. Honestly, they’ve gotten better than they were in the beginning. But there are still some details that need to be worked out and so on. There’s a lot that can be said here, but our goal is to give Kharkiv residents some knowledge that can save their life as well as their psychological well being. The rescuers are also offering to conduct such training sessions for interested groups (20 to 50 people in size) from companies and organizations.

Hospitals of the Saltivka medical complex, which suffered from multiple targeted attacks by the muscovites, will be repaired. Some of them have damaged roofs, ceilings, exterior walls, and interior facilities (operating rooms, an x-ray room), and some of the windows have been blown out by blast waves.

Kharkiv regional prosecutors announced that a Tsyrkuny Village Council deputy is being suspected of collaborating with the muscovites during the occupation of the Tsyrkuny Hromada. He became a collaborator on the first day of the occupation, 24 February 2022. He shared with the occupiers information about locations of office equipment, lists of combat participants in the Anti-terrorist Operation Zone/Joint Forces Operation, location of solar panels in the village’s outpatient hospital, and shared with them the address of the town’s doctor with the goal of further pressuring him to provide medical help to wounded ruscists. He also helped the occupiers resolve different issues and damaged Ukraine’s national emblem on the facade of the Tsyrkuny Village Council building. After Ukraine’s defense forces liberated Tsyrkuny, this deputy hid in various settlements of the region until being arrested in Kharkiv on 1 July.

Seven football players are leaving Metalist 1925 because their contracts are up or because both sides agreed to end them. Earlier, three legionnaires (Solomon Kverkveliya from Georgia and Derek and Marilson from Brazil) also left the team, which plays in the Premier League. Meanwhile, Kharkiv city workers and volunteers managed to save the football fields that were damaged by rocket fire in June.

The curfew in Derhachi now lasts from 9 pm until 6 am. It used to start at 7 pm.

According to the Kharkiv Region Military Administration, 190,000 people living in the region are officially recognized as internally displaced. Most of them left occupied territories or combat zones in Kharkiv, Luhansk, and Donetsk regions.

Fighting is ongoing in the southeast of the Kharkiv region in the Barvinkove and Slovyansk directions. The muscovites are shelling cities and villages near the front: Donets, Husarivka, Krynychne, Chepil, Volobuyivka, Sukha Kamyanka, and Dovhenke.

The so-called “temporary civilian administration of the Kharkiv region” has designated “temporary administrative borders,” creating four “districts” in the occupied territories: Vovchanskyi (the muscovite-occupied part of the Chuhuivskyi district), Izyumskyi, Kupyanskyi, and Kharkivskyi (its administrative center being Kozacha Lopan, part of the occupied Kharkiv district). Additionally, Abbias Piakishev was appointed so-called “healthcare minister” of the Kharkiv district. He is a manager of the communal enterprise called Kupyansk Territorial Medical Association, who in 2020 ran for mayor of Kupyansk as the Blok Svetlychnoyi Razom! party’s candidate.

At the same time the local resistance movement in Kupyansk has distributed flyers calling on the occupiers to surrender and on Kupyansk residents to hang on, because the Defense Forces of Ukraine are on their way.

The most fortified checkpoint in the occupied Borova is the one near the bus station. A banner hanging on it shows the actor Sergey Bordov in the film Brat (Brother), with the corresponding quote from the movie. The occupiers are also pressuring medics, teachers, and cultural workers to leave their jobs at Ukrainian establishments and join the ones being run by the occupier government. A “meeting” of Borova medics was held, with Borova gauleiter Andrei Semashko, from Belarus, in attendance, along with Abbias Piakishev, where the attendees were asked to call on their colleagues to come back to the occupied territory and to the occupiers’ medical establishments. At the same time the gauleiters admit that salaries will be two to three times smaller than in Ukrainian establishments, because there’s “no money.”

Some teachers from Kupyansk agreed to collaborate with the occupiers. They are being sent to the so-called Luhansk People’s Republic to learn how to teach children using muscovite curricula and textbooks.

Prosecutors announced that so-called head of the “administration” of Shevchenkove, Andriy Stryzhko, is being suspected of another crime for allegedly taking down a monument to the Anti-terrorist Operation Zone fighters together with other collaborators. They announced earlier that he was being suspected of treason, collaboration activities, and derision of the Ukrainian national emblem. The prosecutors are in the process of identifying other accomplices in the taking down of the monument.

Let us believe in the Defense Forces and Armed Forces of Ukraine! Let us help volunteers, medics, and rescuers. We will win!