The day in the city was quiet overall. Still, there were isolated strikes on the northern outskirts. The city was under threat of a missile strike all day, according to the Department of Civil Defense of the Kharkiv Regional Military Administration. The authorities warned about this possibility. Meanwhile, only two air-raid alarms sounded during this time. The muscovites have not fired rockets on Kharkiv in the nighttime for two days straight. Perhaps they have changed their tactics once again. At 3 a.m. the following night they struck the southeastern outskirts of the city, but this will be described in the next chronicles. The Saltivka line is only partially operational. The restrictions were imposed due to a potential for strikes on the subway infrastructure in Saltivka. According to the Kharkiv Regional Prosecutor’s Office, muscovite shelling has damaged 224 educational institutions in Kharkiv and 150 in other settlements of the region. 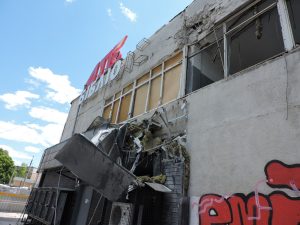 Fighting continues to the north and northeast of Kharkiv. The muscovites are trying to press ahead, while the Ukrainian troops are resisting. The British publication The Telegraph, citing its own sources, reported the capture on 9 June near the village of Izbytske, which is currently controlled by the occupiers, of two Americans who had been fighting in one of the units of the Armed Forces of Ukraine: 39-year-old Alexander Drueke and 27-year-old Andy Hyunh. Officials in Ukraine and the US have not commented on the situation, primarily for security and confidentiality reasons.

Rumors inspired by the muscovites have begun to spread in Kharkiv. Someone started hanging posters attributed to Zhilkomservis instructing residents to leave their apartment doors unlocked starting on 15 June and until the end of hostilities, so that Territorial Defense troops can enter without causing damage in order to establish combat positions. Responding to the fake announcement, Kharkiv City Council said the posters had been hung by scammers, probably for the purpose of stealing property. But I think the situation is deeper, and ruscists may be involved as well.

The overall amount of rumors aimed to split Ukrainians in Kharkiv and other cities has increased in recent days. This shows that even without having enough military forces to take Kharkiv, the muscovites are trying to sow panic and discord among Kharkiv residents and Ukrainians in general, create internal conflicts and use them in the future. Circulating rumors in Kharkiv along with fewer rocket attacks could indicate either a new tactic or an attempt to use various tactics at once.

Police said that on 13 June a rocket attack hit a warehouse (tire warehouse) in the village of Babai, Vysochanska Hromada, resulting in a fire and creating a 4-meter-deep funnel in the area that’s 7 meters in diameter (this indicates how powerful the rockets are). Physical evidence of a missile was removed.

On 15 June, Prosecutor of the International Criminal Court Karim Khan visited Kharkiv and inspected sites of muscovite shelling, particularly Pivnicha Saltivka, where homes and schools were destroyed; as well as the city center, specifically, the Kharkiv Regional State Administration building, the Palace of Labor, etc. He also visited the Pavlove Pole district, where a father and 5-month-old son were killed on 26 May. Interestingly enough, Prosecutor General Iryna Venediktova reported that the death toll in the city and the region was 760 people (police said it was 841 as of 14 June) and the number of wounded was more than 1,000. Also, more than 4,000 buildings were destroyed in Kharkiv and the region. This number indicates damaged and destroyed buildings, and there are obviously more, including almost 2,500 residential buildings. There are plans to open International Criminal Court offices in Ukraine.

The section of the Saltivka metro line between Akademika Barabashova and Heroiv Praci was closed on 12 June, because of a warning from the military about possible targeted strikes on the Saltivske electric depot. Therefore, some of the trains were placed in the tunnels. When the subway opened, I wrote about the possibility of such a threat. But the city government first opened the subway and then closed it. Honestly, I’m surprised, since it was obvious from the very beginning that such a threat was likely/.

In my Chronicles written as the metro was being relaunched, I warned about the following threats that may arise:

As I had predicted, bus stops were shelled and a bus in Selyshche Zhukovskoho carrying passengers came under fire. As a result the route was canceled. And did it need to be done in such a forced way? As a result we returned to restrictions due to security factors. Couldn’t everything be done with security issues in mind in the first place? It’s a rhetorical question.

The second fundraiser for the Armed Forces of Ukraine was held on 6 June by several major Kharkiv internet communities: (XX, 057, Kharkov live, Kharkov city, HS Kharkov, STO Kharkov, Kharkiv 1654). It collected 642,800 hryvnias in half an hour (they had initially aimed for 300,000), and most of these funds already went to buying two Mitsubishi L200 cars, handed over to the soldiers of the 227th Battalion of the 127th Brigade of the Defense Forces and the 93rd Separate Mechanized Brigade “Kholodniy Yar.” The remaining funds are expected to pay for another SUV or van for one of the units defending Kharkiv from the occupiers.

Kharkiv businessman and volunteer Myron Baran gave to the National Guard about 50 polyester tow belts of his own production rated for 14 tons.

On 17 June, at four Kharkiv metro stations, representatives of the Civil Defense Department of the Kharkiv Regional State Administration together with rescuers from the Kharkiv region will hold training on security in combat conditions.

Utility workers restored gas supply to Derhachi after the muscovites had targeted and damaged the pipeline. Now 2,800 customers will be able to use natural gas.

According to the Kharkiv Regional Prosecutor’s Office, muscovite shelling in Kharkiv has damaged 224 educational institutions, including schools, kindergartens, and afterschool program facilities. Another 150 educational institutions have been damaged in other cities, towns, and villages of the region. Forty Eight vocational and higher education institutions were also damaged. Therefore, opportunities to resume learning in the region are limited.

Kharkiv rescuers said they have put out 684 fires in Kharkiv’s habitats since the beginning of moscovia’s large-scale invasion of Ukraine, most of them due to human negligence, but many also due to shelling of the fields and forests.

The Kharkiv regional prosecutor’s office has reported that a military officer from the temporarily occupied territories of Ukraine is being suspected of threatening to kill locals during the temporary occupation of the village of Ruski Tyshky and later robbing them.

In the southeast of the Kharkiv region, fighting continues in the Slovyansk and Barvinkove directions. The muscovites are shelling all frontline villages, as well as the town of Barvinkove.

The situation in the occupied territories of the Kharkiv region is just as difficult. In the territory of the occupied Borivska Hromada, people are trying to sell vegetables, but because there’s a lack of money, they go back to exchanging products or services. Muscovites are also shelling the community’s villages and spreading lies among the locals that the Armed Forces of Ukraine are doing it. Such cases have already been recorded in the villages of Buhaivka (Kunyevska Hromada) and Pidvysoke (Borivska Hromada).

In the occupied village of Shevchenkove, center of the Shevchenkivska Hromada, two men tore down and destroyed the State Emblem of Ukraine from a stele in the center of the town. One of them is a local resident, Andriy Stryzhko, who “considers himself a Cossack,” sympathizes with muscovites, and goes by the nickname Cossack Vakula. Earlier he used to fly the Soviet red flag, waiting for the arrival of “ruzzkiy mir” (russian world). A case had been opened against him. Styzhko was a professional blacksmith until he started drinking. The other man in the video had not been seen in Shevchenkove previously and could be one of the muscovite occupiers.

The head of the Vovchanska Hormada, Anatoliy Stepants, who participated in the 3 June meeting about forming the occupiers’ so-called “Temporary Civil Administration of the Kharkiv Region,” is being suspected of treason by the Kharkiv Regional Prosecutor’s Office.

Today’s Darwin Award goes to one of the supporters of “russkiy mir” who wanted the occupiers to come to Kharkiv. She was exposed by one of the bloggers who recorded an interview with her. During this interview she even showed her passport with her registered place of residence. After the interview spread on social networks, the 40-year-old Kharkiv Tractor Plant neighborhood resident got a visit from the police, who charged her with “collaboration activities.” Every supporter of the occupiers will definitely receive their award.

Let us believe in the Armed Forces, and let us bring the victory of Ukraine closer!

Kharkiv. Chronicles of the Attack on the City. Day 10.

Short Videos of Destruction of Civilian Infrastructure in Kharkiv