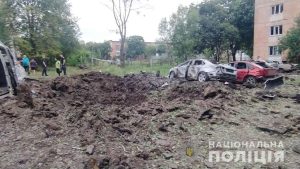 Damage that resulted from a missile strike on a residential area in the Town of Slobozhanske, in the Chuhuivskyi district in the Kharkiv Region. Photo: National Police, Kharkiv Region. CC BY 4.0

The day started with an air-raid alarm and rocket strikes. At 1:05 am, two S-300 missiles launched from somewhere near Belgorod struck the Town of Slobozhanske, center of the Slobozhanska Hromada and home to an extremely important critical infrastructure site: the Zmiivska power plant. One of the rockets landed on the territory of the plant, while the other hit a parking lot in a residential area populated with five-story buildings, creating a crater 9 meters in diameter and 4 meters deep. Some of the cars were destroyed by the explosion and some burned down. Eighteen cars were damaged overall. The blast wave broke windows, damaged balconies, and wounded three town residents. At the same time there were no missile strikes on Kharkiv.

But the day of 15 August started again with missile strikes. This time the missiles struck Kharkiv and elsewhere in the region (the suburbs) for more than 15 minutes, from 2:50 am to 3:09 am. There was a total of 12 (!!) S-300 missile strikes—that’s a full S-300 battalion. As many missile strikes were conducted on Chuhuiv and Kluhyno-Bashkyrivka on 25 July. Four missiles hit one of the industrial establishments in the Slobidskyi district of the city, two more hit a business in Merefa, and a few more landed in the industrial zone of Chuhuiv. According to the head of the Kharkiv Regional Military Administration, Oleh Synyehubov, some of the rockets didn’t reach their targets (that’s about right, judging by the sounds). We know that a few of the missiles landed on the outskirts of Kovyaha, in the Valkivska Hromada (craters are pressent in the ground).

It’s interesting that close to 1:00 am a missile launched from Belgorod landed in the Village of Vesela Lopan, of the Belgorod Region. The friendly fire incident damaged some houses, particularly, breaking windows.

The muscovites are expanding the geographic area targeted by missile strikes. This was the first time a strike launched from Belgorod aimed beyond the borders of the Kharkiv urban agglomeration. First the missiles landed in the region. Notably, the missile strikes on Krasnohrad and Lozova were launched from the waters of the Black and Caspian seas, and they weren’t Iskander or S-300 missiles. That means the missile terror is growing in scale. More and more people can hear the explosions. These strikes could be heard in Kharkiv, even though Slobozhanske is more than 60 km away from Kharkiv. Considering sound penetration, these explosions could be heard by a considerable portion of the region’s population, including in the occupied territories.

Finally, the strike on the Zmiivska power plant (the muscovites had already struck Kharkiv power plants 3 and 5, in Podvirky, and 2, in Eskhar) means that they are trying to create a humanitarian catastrophe in the Kharkiv Region, in which there would be no power, heat, and possibly gas. At this point these signals have become systematic. This is why my thoughts about a difficult winter aren’t baseless.

Strikes on northern and eastern suburbs of Kharkiv continued throughout the day along the entire front line: in Ruski Tyshky, Cherkaski Tyshky, Borschova, Petrivka, Tsyrkuny, Ruska Lozova, Pytomnyk, Nove, Dementiivka, Bezruky, Tsupivka, Slatyne, Prudyanka, Derhachi, Cherkaska Lozova, and Karavan, of the Malodanylivska Hromada. The ruscists also shelled Zolochiv (a residential building, workshop, and cafeteria of Lyceum Number 2 were damaged and an elderly woman was wounded), as well as the villages of Svitlychne, Shapovalivka, and Udy. Peremoha, Verhniy Saltiv, Mospanove, and Stara Hnylytsya are being shelled. The Village of Tsyrkuny has been under mass muscovite strikes for days; now the strikes have wounded a man.

Fighting is ongoing to the north and northeast of Kharkiv, but the muscovite attempts to attack come up empty. The muscovites attacked in the Pytomnyk area, but the Ukrainian military caused losses for the ruscists, who then retreated.

Reading the muscovite Defense Ministry’s reports about missile strikes on Kharkiv, one can’t help but notice that about half of them feature the Kraken special unit, which participated in the battles to liberate Mala Rohan, Vilkhivka, and the surrounding villages, as well as Ruska Lozova, Tsyrkuny, Tyshky, Pytomnyk, and Dementiivka, all of which the ruscists are now constantly storming. The muscovites don’t bother with small details and their reports speak of annihilation of several companies to an entire battalion. Overall, if you take all their reports seriously, more than two Kraken brigades (that’s more than 5,000 people) have been annihilated. They are definitely the most popular type of Ukrainian enemy in the Kharkiv Region. But this is normal for the muscovites; they are almost done annihilating all of Ukraine’s aviation for the third time. And nobody in the swamp has any questions, because they are all battling NATO.

The Kharkiv Region has received seven generators to ensure its medical establishments remain operational in cases of power supply disruptions, two from the UN and five from the WHO. Some of them have already been sent to hospitals in the region.

Remote instruction in the region’s higher-education institutions starts on 15 August. Only one out of 30 institutions with III-IV level of accreditation has been fully evacuated from Kharkiv. A portion of the Kharkiv Polytechnic Institute’s freshman class will be able to learn in education halls in Chernivtsi, where the institute owns a building. The building hadn’t been used for several years. It was recently renovated and had a bomb shelter built inside.

A court has sentenced another supporter of “ruzzkiy mir” (“russian world”) from Derhachi. He had been justifying the muscovites’ war against Ukraine on social networks and waiting for the occupiers’ arrival. He received a three-year prison sentence with the option of getting out after one year for good behavior, since he admitted guilt and made a deal with the prosecutor.

Fighting is ongoing in the Slovyansk and Barvinkove directions in the southeast of the Kharkiv Region. Battles are taking place near the border between Kharkiv and Donetsk regions, in the direction of the Village of Dolyna in the Donetsk region. The muscovites are shelling villages near the front line, including Pryshyb, Husarivka, Protopopivka, Chepil, Nortsivka, Zalyman, Velyka Komyshuvakha, Hrushuvakha, Dibrivne, Kurulka, Brazhkivka, and Virnopillya. The ruscists attacked Ukrainian positions in the Nova Dmytrivka area but were repelled and retreated.

Today’s newsmaker from the occupied territories is Kupyansk and its environs. First, Kharkiv Region’s prosecutors and the Office of Prosecutor General announced that Volodymyr Demchenko, so-called head of the occupiers’ “Petropavlivka Village Administration” and gauleiter on the occupied Petropavlivska Hromada territory is being suspected of crimes. He became a collaborator and started working for the ruscists. Demchenko was appointed as gauleiter at the end of May. Interestingly, he was the Party of Regions’ mayor of Kupyansk from 2010 through 2015. Before the full-scale invasion he was deputy head of the Petropavlivska Hromada. Another interesting detail is that Demchenko strongly criticized the actions of Hennadiy Matsehora before the invasion and occupation of this part of the Kharkiv Region. Now both rivals turned out to be collaborators and national traitors.

Mykola Chashka-Ratushnyi, head of the Kurylivska Hromada, became yet another collaborator. He works for the muscovites as the so-called assistant to the head of the occupiers’ so-called “Kurylivskyi Territorial Center.” Tovarish Chashka-Ratushnyi was seen in a ruscist propaganda video, in which he told about Lisnostinkivskyi Lyceum Director Larysa Fesenko refusing to collaborate with the occupiers and give them laptops that belonged to the lyceum. The town gauleiter’s assistant brags about taking lyceum notebooks and rubber stamps with the help of so-called “law enforcement officials” from the so-called “military civil administration” of the Kharkiv Region. According to the collaborator, the notebooks will be used for educational activities. From 2010 through 2015 Mykola Chashka-Ratushnyi served as head of the Lisnostinkivska village council, an administrative unit that included the villages of Lisna Stinka, Bile, Vorontsivka, Synykha, and Khomyne. In 2020, after decentralization and formation of the Kurylivska Village Hromada, he was approved as head of the hromada.

There’s no rest in the Belgorod region. An explosion by the Ukrainian border, near the village of Velyka Pysarivka, destroyed a tower which the ruscists were using to look after the national border. Mythical “saboteurs” are being blamed for the explosion in moscovia.

The Darwin Award and the Sasha Kots Medal go to a certain “Voienkor Srieda,” whose photo report gave away the exact location of a Wagner Group base in occupied Popasna. Thanks to precise strikes by Ukrainian artillery the base is destroyed. There are reports of many dead and wounded occupiers. We thank the war correspondent who goes by the nickname “Srieda” for the photo that included the objective’s address! The muscovites are now accusing him of working as a spotter for the Armed Forces of Ukraine.

Let us believe in the strength of Ukraine’s defense and the armed forces! Let us help volunteers, medics, and rescue workers. Everything will be, Ukraine!