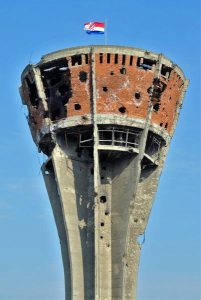 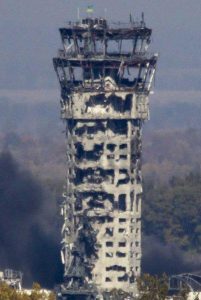 Tudjman was criticised for not providing enough help to embattled Vukovar.

Response to article Why Ukraine is losing.

Author correctly points to many similarities between Croatian war of independence and Russia aggression against Ukraine. However, many conclusions based on similarities are either far fetched or premature.

As of military tactics, both Milosevic and Putin estimated that their opponents won’t be able to produce organised defence against their attack. Putin counted on poor situation within Ukrainian army and disorganisation as well as lack of authority of Ukrainian leaders, while Milosevic counted on vast inferiority of Croatian armament. In some sense Milosevic and Putin were correct in their estimate, but failed to take into consideration the abilities of ordinary Croats and Ukrainians in self-organisation and local initiative.

Contrary to the article, the most critical period happened before general mobilisation, when defence was performed and Serbian-held barracks overtook primarily by professional and volunteer rather than mobilised units. Actually, there were many instances when local Croats organised completely by themselves and even succeed to stop advancement of the superior enemy in terms of organisation and armament. Even government units were often left to work on their own initiative. In chaotic situation in the beginning of the conflict, local commanders knowledge of situation was more important than the global strategy.

The significance of mobilisation instituted in October 1991 is also overestimated. Mobilised units were poorly trained and armed, many were never sent the front, instead performing police or supply duties. Those mobilised units that were military engaged were used purely to guard less exposed positions already under Croatian control, the task they sometimes failed. The most important impact of mobilisation was that it did relieve some duties from professional and volunteer units.  This is reasonable taking into account the fact that the front line in Croatia was probably longer than the front line in Ukraine.

One way or another, the main reason for failure of Milosevic and Putin objectives was strong individual initiative and not good centrally planned response.  The lack of well-performed organisation can be actually seen as a positive sign – it shows that motivation of ordinary Croats and Ukrainians alike was very high. They did not go to fight by compulsion, but on their own initiative. On the other hand, Croatian experience also shows that such non-centralised war effort is successful only in the defence phase. In years following Serbian aggression, voluntary or semi-independent units were completely absorbed within Croatian army and put under centralised command. Clear command line and coordinated effort was conditio sine qua non to the later success of liberation actions Flash and Storm.

Another good point of the article is pointing on the crucial role of Croatia’s president Tudjman especially from the strategical perspective. It is now clear that Croatian leadership decided that country territorial integrity is the prime objective and that everything else should be subordinated. This was not only an empty slogan, they really meant business. In fact, Croatia between 1991 – 1995 was de facto war economy without declaration of war and general population understood and supported this position.

However, tactical decision making of Croatian leadership article is perhaps depicted too rosy. In all stages of the war, Tudjman and Croatian leadership was repeatedly perceived by public as insufficiently resolute, both militarily and diplomatically, and some of their decisions were even characterised as “treacherous”. The decisions that drew most criticism, even within Croatian leadership, were not joining Slovenian effort when Serbian army attacked Slovenia and not giving enough support to exhausted defenders of Vukovar.

Interestingly, even 20 years after war, topics of (possible) bad decisions are still contagious and even today historians and participants of the war disagree if some controversial decisions were correct. Harsh criticism of Ukrainian government at this moment and without deep insight into the situation, secret to general public, is therefore inappropriate and premature.

The outcome of the conflict, where all sides occasionally make mistakes, will be determined on the strategic level, and depends primarily on long-term objectives of Ukrainian leadership. Russia is going to take as much as it can, it is only on Ukrainian leadership how much (if any) is ready to give. Like in case of Croatia, so far it seems that time is working in Ukraine favour. Despite the fact that Russia will always be militarily superior to Ukraine, just as was Serbia compared to Croatia, economical grievances, internal and external enemies and prolonged conflict with no viable solution will wear out Russian determination and capacity to wage war far more than Ukrainian one. If sanctions of the West remain in place, Russia is firmly on losing track.

False expectations from the Ukrainian populace on direct military (NATO) help is in line with expectation of Croatian populace in 1990s. I am firmly convinced that Ukrainian leadership, like Croatian leadership before, has more realistic view of situation. As author correctly concludes, this kind of help never materialised, but many subtle diplomatic, military and above all economic moves greatly improved Croatian chances of achieving the success. The crucial turning point was the realisation of the West that dictator like Milosevic and Serbian population expansionist mentality are not something you can make deal with or build peace upon. After USA provided intelligence and military support and withdraw reservations against Croatian offensive, Croats done their share of work.

Finally, author claims that Yugoslav offensive to crush Croatia was far larger than the Putin efforts in Ukraine. This might be true taking into account the scale of countries (Ukraine and Russia being approximately tenfold larger in population than Croatia and Serbia), but in terms of armoury, fighters and victims, these conflicts are more comparable. So far in several ways Ukraine fares better than Croatia: relatively small share of Ukrainian territory is occupied, Ukraine has much better armament and strength of the Western support for Ukraine is something Croatia could only dream of in 1991. The only thing that goes obviously against Ukraine is Russian nuclear capacity. Hopefully, this sole fact will not lead to different resolution to the conflict than in Croatia.