The President of Israel Reuven Rivlin was not simply politically incorrect. He came to a foreign country which was honoring among others the victims of his own national greatest tragedy and responded with bad behavior. He denigrated his hosts:

“Around 1.5 million Jews were murdered in the territory of modern day Ukraine during the Second World War; in Babi Yar, and in many other places of murder. They shot them in the valleys, in the woods, into pits, into mass grave. Many of the collaborators were Ukrainian, among the most notorious the members of the OUN who carried out pogroms and massacres against the Jews and in many cases handed them over to the Germans. It is true, there were more than 2,500 Righteous Among The Nations, lone candles who shone in the darkness of humanity. Yet the majority remained silent”

He was discourteous and offensive in addition to being historically incorrect. Were some Ukrainians complicit in the Holocaust and the events at Babyn Yar in September 1941? Certainly. So were some Jews. Were some members of the Organization of Ukrainian Nationalists or their formations complicit. Yes. But the OUN was not since it neither directed nor condoned complicity. Furthermore many members of the OUN were killed and are interred at Babyn Yar. Rivlin spat upon their graves.

In fact the entire world was complicit by remaining silent. Many Jews themselves were more complicit than those who simply failed to speak out. They served as ghetto leaders or capos rounding up their fellow Jews for slaughter. The preeminent Jewish historian on the Holocaust Raul Hilberg wrote extensively on this topic.

Besides his offensive accusations against Ukrainians in their own home Rivlin failed to recognize at all the non-Jewish aspect of the Babyn Yar tragedy. It is the interment site of some one hundred thousand human beings. Some thirty five thousand were Jews, but the overwhelming majority were non-Jews, Ukrainians, Romas and others.

Is Babyn Yar the site of a Jewish tragedy? Certainly, but it is also a lesson for people like the President of Israel, that tragedies are international in scope. Genocides are not the exclusive proprietorship of the Jewish people. Genocides were perpetrated in the XX century against many nations, Armenians, Ukrainians to name only a few.

The Holocaust was unique. But every genocide is” sui generis”. Ukraine has long ago recognized the Holocaust as genocide. Israel has not recognized the Holodomor as such. Raphael Lemkin, a Jew and the author of the term Genocide as well as one of the drafters of the United Nations Genocide Convention specifically referred to the Ukrainian famine when drafting for the Convention a definition of genocide occurring in a time of peace or war. The Ukrainian genocide took place in a time of peace. The Kremlin was the perpetrator but the entire world was complicit by not only remaining silent but conducting trade with the perpetrator. Unfortunately, many Jews were a little than simply silent abettors.

President Rivlin’s affront notwithstanding, it was proper for Ukrainians to honor its own victims as well as victims of other nationalities. It sensitizes us to the suffering of others. Ukraine must share human concerns. President Rivlin would do well to learn from the Ukrainians about history and sensitivity.

Still there should have been a response to Rivlin from the Ukrainian side. The Speaker of Ukraine’s Parliament remained silent. Ukraine’s president did not comment and then traveled to Israel to attend funeral services for former Israeli leader Shimon Peres. Did Ukraine simply take the high road or did it reward bad behavior. Probably a sycophantic combination of both.I am proud of Ukraine for its sensitivity, but I am disappointed that it did not stand up for its history and its people.

Reuven Rivlin is no paragon of sensitivity. While he purports to concern himself with minority rights marginally, he opposes a Palestinian state the only real guarantor of Palestinian rights (supports Jewish settlements on Palestinian territory, the West Bank), even opposes women’s rights, etc.

His offensive behavior in Ukraine certainly does not deserve Ukraine’s respect.In fact Rivlin deserves disdain and perhaps designation as a “persona non grata” in Ukraine. Those who listened to him in Ukraine’s legislative chamber in silence when they were in position to rebuke his accusations deserve criticism. The Ukrainian victims interred in Babyn Yar including the OUN members deserve better. 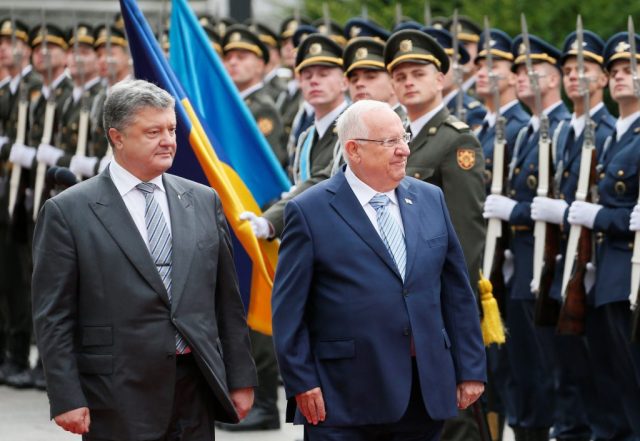 Cooperation with NATO as a State Security Enhancer