The first day of April was very warm. The breath of spring can already be felt. The day was relatively quiet.

Although the silence I’m talking about is relative. There was no major shelling during the day, but some did occur periodically. There were waves of shelling of low and medium intensity, the usual morning activity of muscovites, followed by a short lunch break. The evening was marked by further muscovite activity at the end of the day, although prior to that things were quiet. 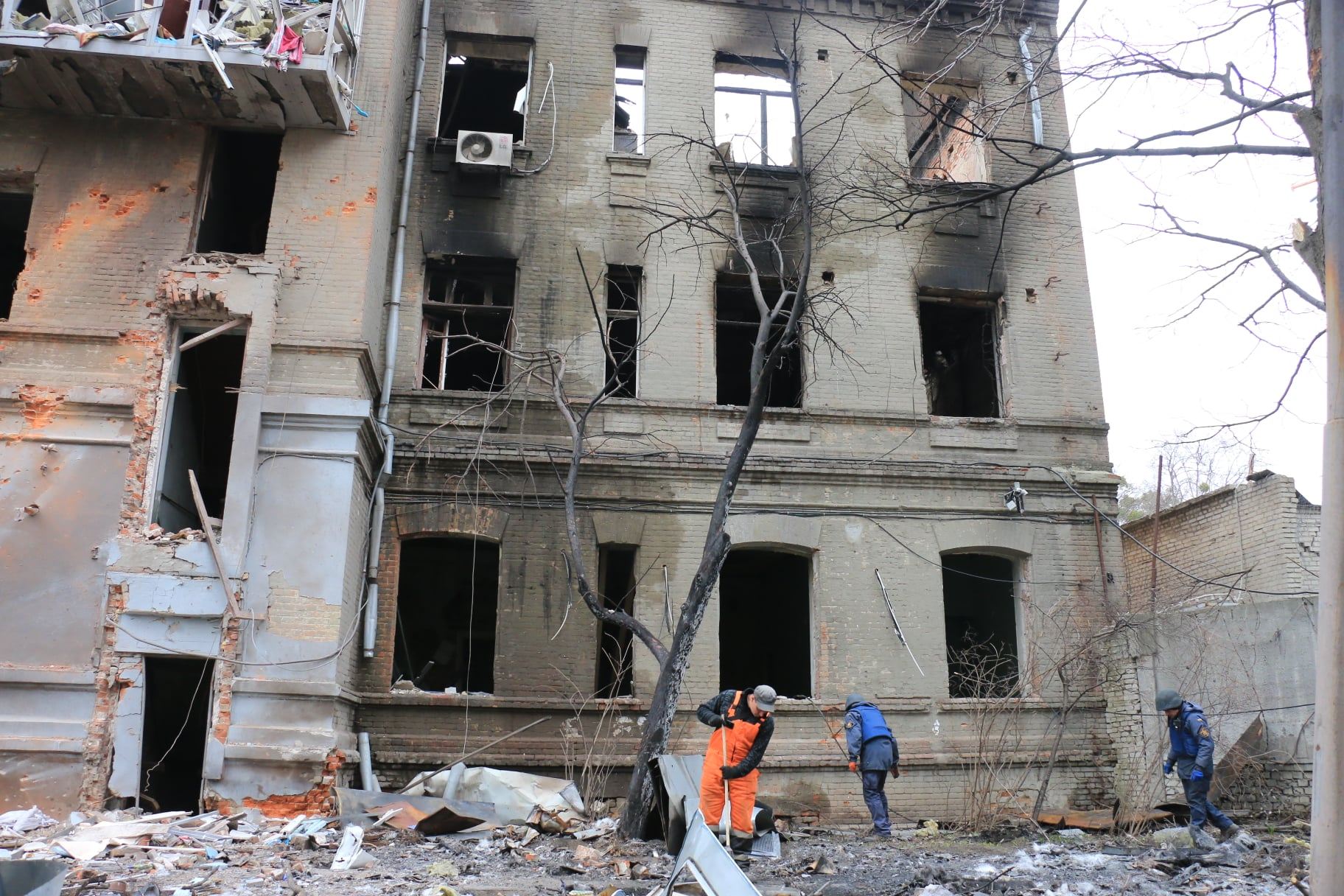 Main Directorate of the State Emergency Service of Ukraine in Kharkiv Oblast (Region), CC BY 4.0.

The muscovite “liberation gifts” usually hit Saltivka (in particular Northern Saltivka), Velyka Danylivka, the villages of Zhukovsky, Oleksiyivka, Obriy, and the Kharkiv Tractor Plant neighborhood. Of course, the strikes caused fires to occasionally break out in the northeast and southeast of the city. The smoke from these fires could be seen from at least a few kilometers away. In Oleksiyivka, two people died from the rushist shelling. There was also shelling in the vicinity of the Mashynobudivnykiv Park and the village of Artem (yes, the popular toponymic name of Artem’s Park, which is now called Mashinobudivnikiv, still exists). There is damage to some industrial enterprises in the area, particularly Turboatom and HEMZ (translator’s note: Kharkiv Electromechanical Plant).

Kharkiv is defending the city and its surroundings. Our military is ready for any scenario, particularly one where some of the troops that withdrew from Kyivappear near Kharkiv.

Public utility workers continue to clean up the city and repair water supply networks, even in areas where they could be shelled at any time. They don’t pay attention to the explosions at all. These people are made of titanium. I don’t even know how much endurance they must have to work in these conditions. Many people are coming out to clean up their neighborhoods, particularly those where it’s become quieter. After all, we’re not used to living in shit, like the orcs are.

Kharkiv city authorities have decided that utility bills for city residents will be paused until martial law is lifted. The payments will be covered by the city. In fact, few people can afford to pay utility bills now.

The city is coming back to life. More and more markets, shops, and kiosks are open, sometimes even “Kulinichi” (translator’s note: a popular restaurant)! Clothing stores, shops selling household goods, and others are opening as well. The selection in supermarkets and shops is good, though not yet what it was before the start of the large-scale invasion. But there’s been just unbelievable progress over these 37 days! And if during the first two weeks even buying a minimum set of products for survival was a problem, now it feels like heaven on earth. These feelings are difficult to describe.

Meanwhile, queues at shops and supermarkets are gradually disappearing due to the consistent deliveries of products and goods, even places on the outskirts of the city. Of course, this is not the case in areas where there is constant shelling. There are no more queues in the pharmacies of the kind we saw over the past month, because there are many pharmacies now open, not just one per district, as was the case in the first three weeks of war.  Pharmacies in general have a good selection of at least the most popular drugs. Of course, there are problems with everything else.

Certainly, the situation is very difficult in the areas that are constantly under fire. Many shops and supermarkets are damaged, and there is still no power. Northern Saltivka, part of the Saltivka residential district, Obriy, areas most affected by shelling, do not have any shops open at all. There is nothing there, all the shops and markets have been destroyed or burned down. No humanitarian aid is coming in from the regional logistics center because of the threat of shelling by the russists. Many places have no power and/or gas. Despite this, there are still small groups of people there living in basements. Many survive with the help of volunteers who bring food. These people refuse the opportunity to leave. Some have become unstable because they’re permanently living in basements, even though shelling is not as intense as in the first two weeks. They just refuse to go outside! I don’t know what to do with them.

One can already tell what sort of bomb has landed, whether it’s a mine, a shell, or jet artillery. Not that this is a good skill for a civilian to have, but it is what it is.

When you are constantly seeing places where people have died from muscovite shelling, when you’re seeing this chaos, you have to rate the fuckery, because otherwise it’s difficult to describe. You end up developing a “professional slang” of sorts.

There were also muscovite attacks on Derhachi and the community. There is always something landing there—daily. Also, in the vicinity of Chuhuiv and Pechenihy backyards of singleьfamily homes have been hit.

This is in stark contrast to the suburbs, which haven’t been shelled. Life there is absolutely quiet and peaceful! Today I couldn’t resist and bought a cider, my first drink with some alcohol content since the beginning of the attack on Kharkiv.

The muscovites, unfortunately, took control of Izyum, because of the traitors from OPFL (translator’s note: Opposition Platform For Life). But the fighting continues on its outskirts, with our soldiers defending those areas. The muscovites are trying to go around Izyum from the flanks to advance to Slovyansk. People have evacuated from Barvinkove ​​and nearby villages to avoid great casualties in case russists attack Slovyansk from the other direction. It’s the right thing to do.

Due to the fact that shelling, rockets, and air strikes on Kharkiv damaged all the buildings of the Karazin University, the school will be temporarily relocated to another city in Ukraine. These are the realities. According to police, 394 people perished in 37 days in the Kharkiv region, including 21 children. This number probably does not include data from the temporarily muscovite-occupied territories in the region.

Fighting continues for Rubizhne and along the entire line of the Joint Forces Operation, which has retained its shape in the north of Donetsk region. But so far there have been no active offensives, because the Russian scum is waiting for reinforcements from those units that are withdrawing from the northern and eastern directions of Kyiv. At the same time, not all troops have withdrawn, and the fight near Kyiv continues, even though our military has already taken Bucha and entered Hostomel. The photo of the burned AN-225 “Mriya”is very sad. Fighting continues in Chernihiv and northeastern Kyiv. That is to say that the muscovite “departure” hasn’t been easy for us. There are successes in Kherson and Zaporizhzhia.

But the muscovites have made peace with the withdrawal of troops from Kyiv and have reached the stage of acceptance. Just yesterday they objected and were angry. It’s been a rather quick change.

Things aren’t calm in the Belgorod region, or, as Oleksiy Danilov put it, the Belgorod People’s Republic. In the morning, muscovite helicopters bombed an oil depot near Belgorod, and then, according to OSINT(Open Source Intelligence), fired on their own field near the village Nikolskoe. Something flew toward the border of Ukraine, not from Ukraine.

Of course, Ukraine was blamed in both cases. Our officials say that the local authorities are responsible for everything that happens across the border. In the morning, there was panic in Belgorod, long queues formed at gas stations, and the governor of the Belgorod region tried to calm the population down so much that he named the location of another oil depot, the City of Gubkin. And we will write it down, for the future.

Of course, all this is designed for the Muscovites, in order to scrape up resources for further fighting through covert mobilization.

But in a country where more than 80% support the destruction of Ukraine and Ukrainians, this can have a completely different effect. When you were promised to take Kyiv in three days and instead something starts to constantly explode near you, fear sets in. This is different from what happened on Kashira Highway and in Volgograd, when the opinion of muscovites was being swayed to support the Second Chechen War. This will have a different effect: panic. The psychology of the population of the invader and of those who are defending their land is different: there is a different mentality among the muscovites than among us. They will feel fear and panic and attempt to hide from the war and covert mobilization. This is not happening today, but soon it will.

It is difficult to find the correct analogy to compare the present with the past because we are now in the age of the internet, and these are completely different circumstances from those that existed in the First or Second World War with Germany, although the analogies are relevant.

In Poltava, trolleybus tickets have the inscription “Kharkiv, Hero City.” Many thanks to the people of Poltava for their moral support! Your help in the background isinvaluable for Kharkiv residents!

Today, I issue a recognition award to the American actor Sean Penn, who called on the richest people in the world to buy F-15/F-16 and air defense systems for Ukraine for $ 500 million. A very strong proposal and idea! A wonderful call to help a country that is defending the civilized world from the muscovite horde!

Today’s Darwin Award goes to a russist ZRK (translator’s note: rocket launcher system) which opened friendly fire and crashed its own military’s plane. Of course, this is not a helicopter shooting at its own positions, but the spend of ammunition combined with the loss of equipment is also pretty good. This information comes from British intelligence.

We believe in and support our defenders. Let us help those who support the livability of cities, those who take care of our military, and those who volunteer. Let us support each other psychologically. We will win, because truth and strength are on our side!