Today was a relatively quiet day. There was shelling, but it was mostly low-intensity and came in waves. The wave-like pattern has become a constant in recent days.

In the morning, the muscovites intensified the shelling. At about 10 a.m., Gorky Park was shelled. The shelling was accentuated and powerful. At that time, I was near Sarzhyn Yar. Unfortunately, this is now the daily routine in Kharkiv… Some of the attractions and buildings in the park were destroyed by the shelling, and a public utility worker was injured. I think (the late Hennadiy) Kernes will arrange a special place in hell for the muscovites who destroyed his masterpiece 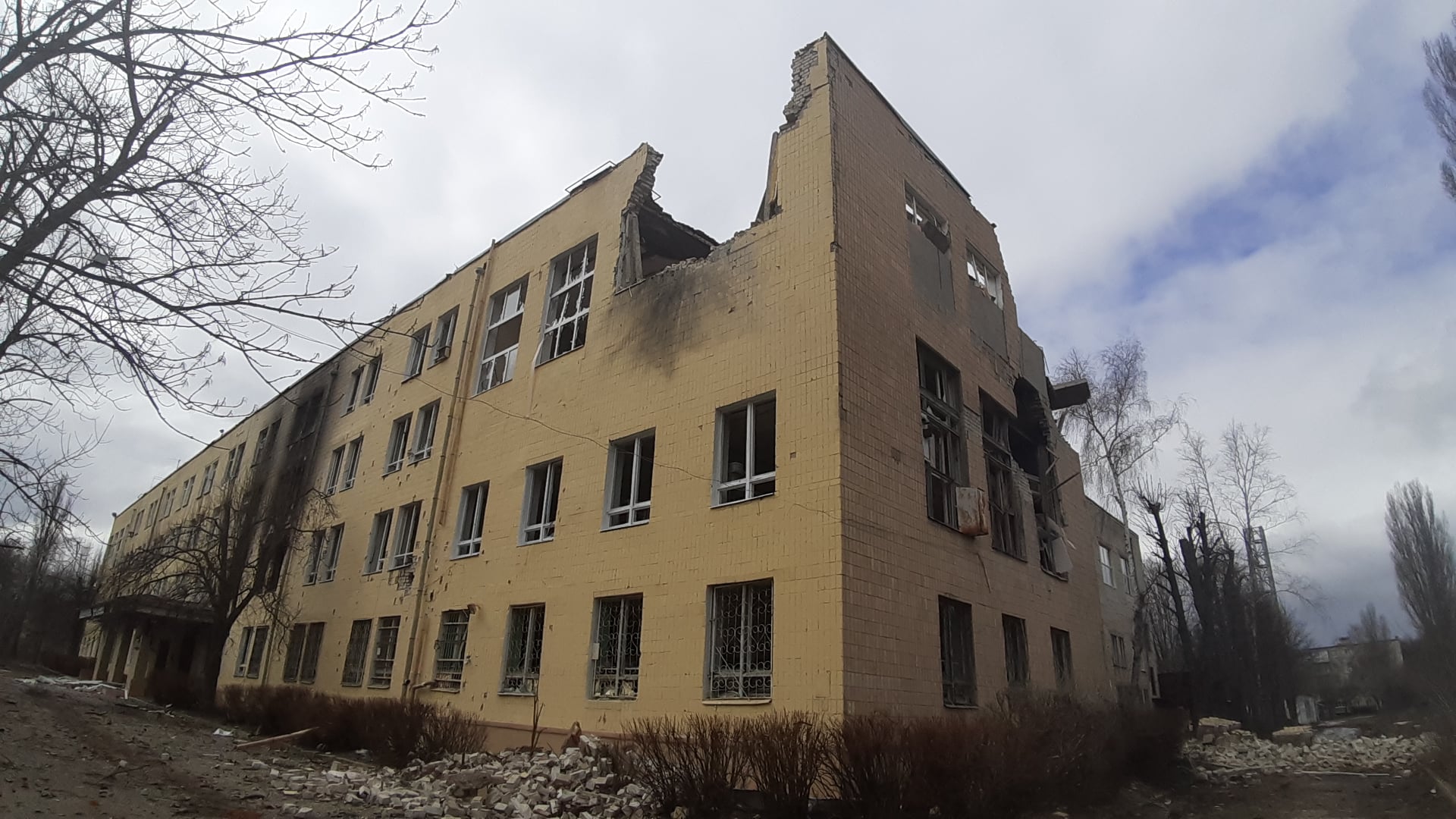 During the day, Saltivka, Velyka Danylivka, Oleksiyivka, Pyatyhatky, Obriy, and the Kharkiv Tractor Plant neighborhood were shelled. The most intense shelling by the russists took place in Pivnichna Saltivka. At the moment, this is the hottest area in the entire city, hit by about a third of all shelling. One of the largest residential districts is simply being destroyed along with its entire civil infrastructure and buildings. There are no undamaged buildings in Pivnichna Saltivka as a result of shelling—the damage ranges from broken windows to complete demolition of essential buildings such as schools and kindergartens. Pivnichna Saltivka, stretching out from Kytlyarchyn Yar (Dzherelna Street) to the beltway, is built up with nine-, twelve- and sixteen-story apartment buildings where people are, in the absence of power and gas, cooking for themselves on campfires in the yards of damaged apartment buildings, hiding in their basements…

There were also shellings in Derhachi and in other villages around the Derhachi community. As a result one of the gas pipelines was damaged. Shellings were also heard from the Chuhuiv direction.

Every day, while recording various damaged buildings in Kharkiv, our team of documentarians finds confirmation that the muscovites are the sole cause of deliberately destroying the civilian infrastructure, which I described in detail in the March 30 chronicles, in all areas their munitions can reach.

With the exception of the serious and debilitating destruction in Pivnichna Saltivka and Obriy, as well as Velyka Danylivka, other areas of the city have damage that doesn’t make them unlivable. Some residents have returned to one of the districts of the city that was hit by a powerful air strike a month ago. There are several shops and even a few kiosks open there. This is in spite of the fact that more than a half of the residents have left the city—at least to a suburban area where it is quieter and more peaceful.

The staff of Karazin University approved the decision to stay in Kharkiv despite an official of the Ministry of Education’s statement urging it to move to another city. The education process currently continues online.

There is some new information about the broader region. Heavy fighting continues on the outskirts of Izyum, but day after day our courageous defenders repel the upcoming units of the muscovite horde that are launching daily attacks against Izyum. Columns of muscovites are near Valuyky and already moving through occupied Dvorychna and Kupyansk to reach Izyum.

Missile strikes were fired on the residential Lozova in the south of Kharkiv region today. As a result single family houses were damaged, four people were injured, and the city itself was left without electricity and water. According to local authorities, repairs to infrastructure will take at least three days. This is additional proof that the russists want to destroy the life support systems of Ukrainian cities. Rocket attacks were also carried out on Poltava, Kremenchuk (on the refinery), Myrhorod, and Pavlohrad, where they damaged, in particular, the railway station and overpass.

Also in the Kharkiv region, the Ukrainian military from the “Korsar” anti-tank complex destroyed two russist Mi-8 helicopters in one shot. A missile hit one of them, it spun uncontrollably, and crashed into another. One blow—two russist air units gone! The muscovite children’s proverb about a fork (one blow, four holes) comes to mind.

The russists seized part of the village of Oskil, the center of the Oskil village community, near Izyum, and blew up the dam of the Oskil Resevoir. The condition of the Oskilska hydroelectric plant is unknown. Because of the blast, water gushed into Oskil and Siversky Donets, flooding the territory of the Svyatogirska Lavra. Additionally, the Oskil Reservoir was part of the system of water supply to Donbas, where water supply has historically been a big problem.

Meanwhile, almost all units withdrew from the right bank of the Siversky Donets near Balakliya and transferred additional forces to Izyum. As they departed, the russists shelled the Balakliya hospital and then tried to blame the Armed Forces of Ukraine. Balakliya is occupied, mostly staffed with ORDLO soldiers (translator’s note: “ORDLO” refers to the separatist areas of Donetsk and Luhansk regions).

In other areas, there is a threat of shelling from rocket-propelled grenade launchers and air strikes in the town of Barvinkove, where the evacuation of civilians is in progress.

There are stories about unknown heroes of the warriors of Kharkiv. During the shelling of the city by rocket artillery on March 1 this year, one of the missiles hit near the Kharkiv-Pasazhyrsky station. The crew of the ChME-3 locomotive depot Kharkiv-Sortuvalny first moved cars to form a barrier, according to safety instructions for the scenario, tied the rocket with ropes to train cars, carefully pulled it out of the ground under supervision of State Emergency Services of Ukraine officers. This is true heroism which should be recognized not only by their department but also by the state.

The battles for Rubizhne and Popasna continue. Muscovites are trying to take Avdiyivka and Marinka, attacking Vuhledar and other cities and towns along the line of contact in the northern part of Donetsk region, where the collision line configuration remains the same as of February this year, as our glorious military is repelling russist attacks.

According to Ukrainian intelligence, in the occupied villages of the Izyum district in the Kharkiv region, civilians are resisting. Someone fed delicious pyrizhky to muscovites. As a result two died and 28 were hospitalized in intensive care. A good recipe against the occupiers! And about 500 more russists were hospitalized after consuming alcohol of unknown origin.

A pro-Ukrainian action took place in Enerhodar today, but the occupiers again dispersed it with stunt grenades and machine guns. Thank you to the people of Enerhodar for resisting the muscovites.

The muscovites withdrew from the Kyiv region and now the entire Kyiv region is free from the occupation. Also, russists are retreating from the Chernihiv and Sumy regions. In final acts of violence, those leaving are looting, destroying Ukrainian towns and villages, stealing valuable property, and killing civilians. The territory is also packed with active mines, especially residential buildings.

One of the most famous Ukrainian photojournalists, Max Levin, died near Kyiv. His body was found in the liberated territory. He was last seen on March 13, when he went to film the battle for Kyiv.

On the evening of April 2, over 300 murdered civilians, some in a mass grave, all victims of unspeakable terror against the civilian population, were discovered in Bucha. Many of the bodies had been lying on the streets for days, some had been hurriedly buried by Muscovites to hide traces of the crime. Dozens of men, women, and children were killed after being raped and tortured by the occupiers; bodies had their hands tied behind their back, people were shot in the back of the head 1930-1950 NKVD style. Women, raped and killed, were hastily and ineptly burned by the russists to cover up their crimes.This is an attempted genocide of Ukrainians in the 21st century, in 2022. We saw this in Rwanda in 1994, but in some ways the muscovites’ atrocities are worse.

All this is russism, which has existed in various guises for over 500 years, since the concept of “Moscow is the third Rome, and the fourth does not happen,” which existed in the form of the Moscow Empire, the Russian Empire, the Soviet Union, and now in modern moscovia. Their goal is, at minimum, to re-establish the territory of the USSR, and at maximum, the territory of the Warsaw Pact countries. Therefore, they want to seize Ukraine, whether with or without people or infrastructure. The value for russism is exclusively the territory, even without the Ukrainian population, because their goal is the border with Poland for ballistic missiles placement, which will put them in a position to reach virtually all of Europe. The de facto occupation of Belarus or the actual occupation of Crimea does not give them this advantage. Only the possession of Ukraine provides a border from which to blackmail Europe. The greatness of russism is not in its economy but in the size of its territory, its number of troops and weapons, and its ability to intimidate the whole world, especially with a nuclear truncheon, so that the world, especially Western countries, will bend to Moscow’s political and economic whims.

The russists’ goal is to assimilate Ukrainians, and those who do not will be simply destroyed, physically eliminated. They want to kill all resisting Ukrainians. This is worse than nazism! Russism is a misanthropic ideology.

The active phase of Ukraine’s war with moscovia can only end with tough sanctions, and until Europe can completely give up muscovite gas and oil, trade should be conducted exclusively on the basis of “fuel in exchange for food.” All other trade with Moscow, as well as the presence of foreign companies there, must be stopped. Ukraine is at the forefront of the struggle against the moscovia horde, which never abandoned the idea of ​​world domination and world revolution as proclaimed by the Bolsheviks in 1917.

But this does not guarantee peace in the future. An example of the risk is DPRK, which has nuclear weapons. Therefore, moscovia will try to recover and start a new war. Only the harshest sanctions and complete isolation will stop a permanent war from continuing in Europe. In order to make this impossible, even the deprivation of nuclear weapons and derussification, for 30-50 years (about two generations), is not enough, unlike ten years of denazification in West Germany. Moscovia must cease to exist within its present borders and the people who are virtually enslaved must gain independence. Is it impossible? In 1984, it was believed that the USSR would last forever, but in seven years the USSR disintegrated, and new states emerged as national independent states. Ukraine has restored its statehood since the muscovite occupation in 1920. The existence of western values ​​and democracy is only possible if moscovia is thwarted in its aims and gradually dissolved from present geopolitics as was done with the nazi third reich.

But there is also good news. The Special Operations Forces of the Armed Forces of Ukraine captured an almost untouched muscovite helicopter Ka-52 that needs minor repairs.

And the Darwin Award goes to a group of Muscovite soldiers who died after our missile hit their car loaded with looted property. They could not escape because they were weighed down by the carpets they had stolen. Naturally, the carpets caught fire and they burned alive. Looting presents the risk of death.

Let us help our military and those who supply them with everything they need, those who provide medical care, and those who support the functioning of the cities in the rear. Let us support each other in these testing times. We will win, because we are Ukrainians!