The shelling of Kharkiv continues, but the intensity has generally decreased from yesterday. The city goes on living its life, while our military prepares for all the scenarios.

Today is generally a quieter day. There was the occupiers’ usual morning activity, which died out in the afternoon. The evening shelling is also of a low intensity, but varied in geography—there is quiet in some areas and shelling in others. As usual, they fired upon Saltivka, Kulynychi, Obriy, the Kharkiv Tractor Plant neighborhood, Oleksiyivka, and Pyatykhatky, as well as Kholodna Hora.

The shelling of suburbs like Derhachi and other villages of the hromada, as well as the Chuhuiv area, is ongoing. Derhachi is mostly without electricity; there are major problems with telecommunications.

Kharkiv is being cleared of debris. The main structures of destroyed buildings in the center of the city have already been dismantled (monuments are the only thing remaining, because they need special expertise). Major clearing work, involving rescuers and volunteers, is underway in secure and relatively safe areas of the city.

According to Kharkiv experts, “Dzherelo Neitroniv” (translator: the Neutron Source research facility) in Pyatykhatky is intact, everything is under control, and there is no threat. I will not reveal details, because the muscovites might use the information, but it is reliable. So there is no reason to panic. However, the Faculty of Physics and Technology building of Karazinsky University is very badly damaged and more than likely cannot be saved.

Life in the city is returning. Trade is intensifying in relatively quiet areas; markets are open and small shops are gradually opening.

For many business owners, the main problem now is staffing. Employees mostly fled or joined the army, or live in different parts of the city, while public transportation has stopped. Even so, electrical engineers and public utility workers are repairing networks.  As a result, they have restored electricity in some areas of the city where it has been lacking for about a month. How they do it in these difficult conditions is a mystery. They are “Terminators!” In fact, public utilities, as an industry, have worked under war conditions as well as they worked before—even better.

Today, volunteers planted flowers in a gardening campaign near the Memorial to the Soldiers of the Ukrainian Insurgent Army in Molodizhnyi Park. Everyone worked quickly and hard. This was great! This happened while air raid sirens were blaring, so an entire group jointly sent the muscovites the way of the Russian warship. After all, war is war, and gardening is gardening. 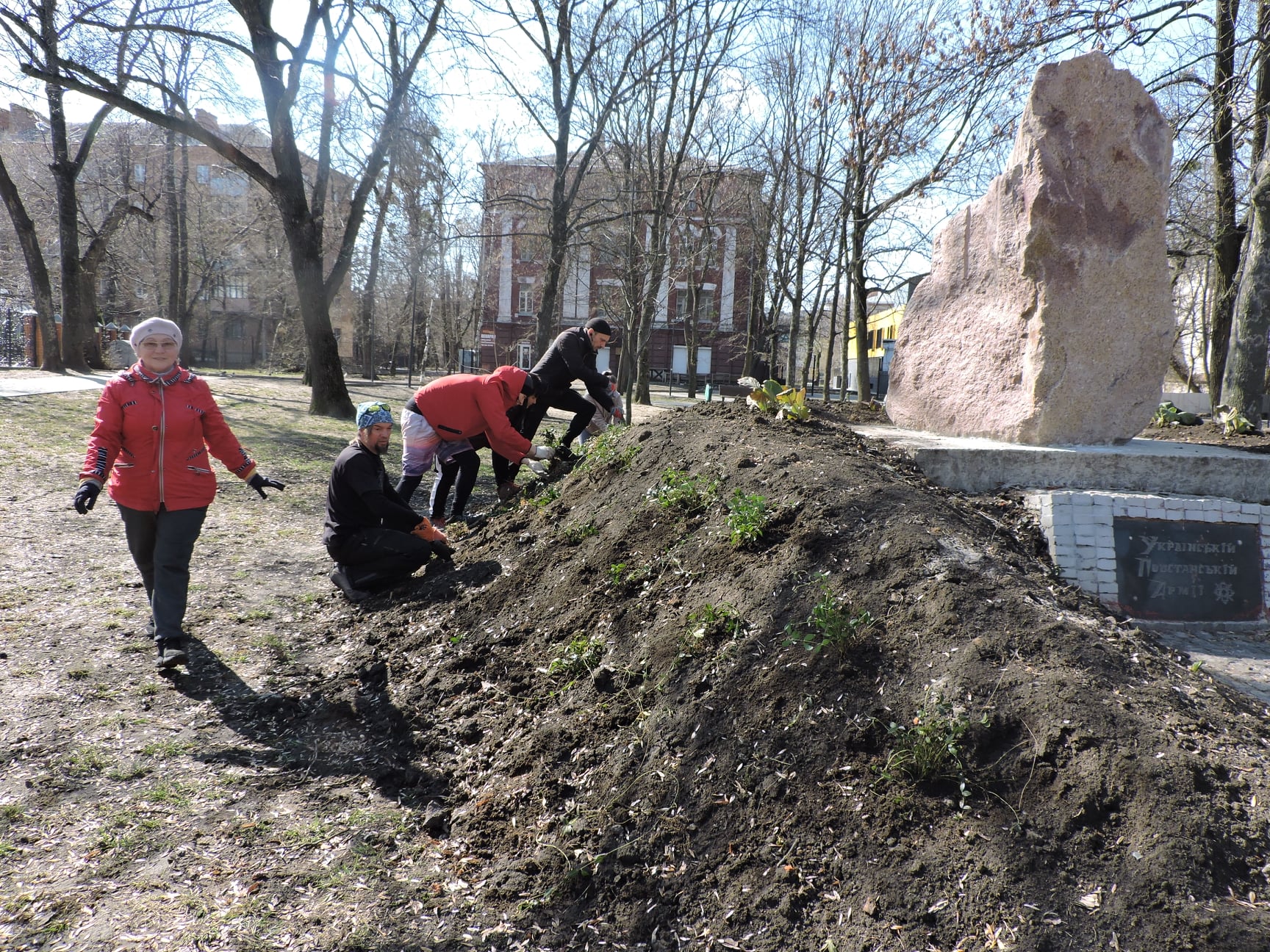 Feldman Ecopark (zoo) was completely destroyed by yesterday’s shelling of the Pyatykhatky area. Feldman, himself, announced that it was not possible to save large animals and that they should probably be put to sleep today. Within a few hours of this announcement, several organizations created animal rescue groups and/or have already had them sent to Kharkiv. Some animals have already been evacuated; others will be evacuated tomorrow. I don’t understand Feldman at all. As a big businessman, he has connections, yet he could not negotiate saving animals together with those who were ready to help? It is not so much about his character, but about his ability to manage his business and his acceptance of his social responsibility for the business itself.

Regarding the panic that has started among Kharkiv residents because of the General Staff’s statement about a possible attack on Kharkiv. When the city was attacked by an army of orcs from the elite muscovite units in the first week of the war, for many, everything was tolerable. There was no panic when the advanced detachment of ruscists was stopped in Lypetsk on the beltway just 3-4 km from my house. There was no panic when a column of occupiers’ armored vehicles, together with a Grad (translator: Soviet truck mounted multiple rocket launcher), was burned near the Faculty of Physics and Technology building at Karazinsky University. [The metal debris was mostly removed, but the burned “Grad” mounted on Urals (translator: trucks made by Uralmashzavod) was left as a symbol of this Ukrainian victory. Slava Ukraini!] There was no panic when several sabotage and reconnaissance groups roamed the city, one of them burning along with school #134 on Shevchenko Street, or when Kharkiv was bombarded by planes every night for two weeks and defense of the territory was just beginning.

Now we have not just a battalion, but a Territorial Defense brigade with combat experience. The city is well fortified and protected, and ruscist planes are afraid to fly close to Kharkiv. Enough panic! If you are afraid, then leave; there are a lot of opportunities for evacuation. And for those of us who decide to remain in the city, we have to do our part. They can attack, they can try to access the city from several directions, but they cannot completely surround or occupy the city—no, it cannot happen.

Of course, no one denies that the shelling in parts of the city may intensify. That

is ok, we will survive. Everything will be fine, I know.

Combat fighting is continuing in the region. The muscovites once again tried to get into Sloviansk through Izium, but, again, they did not succeed. Moreover, in the Izium area, our military shot down a ruscist Ka-52 helicopter with an armored cockpit using the Ukrainian Stugna anti-tank missile system (ATGM). This “bird’’ did not have a chance. There are also records of another ruscist “bird” being shot down by an ATGM. I understand that our military will make Ukrainian ATGMs a universal weapon for everything that moves on land, in the air, and at sea.

Our specialists were able to detain one of the collaborators who showed muscovites the ford they used to cross the Siverskyi Donets river toward the southern part of Izium. Yevgeniy Bryukhanov is a former employee of the Izium forestry. This is the fifth collaborator in Izium! And in Kharkiv, they detained another Russian collaborator, Oleh Novikov (who wrote about it on social media), who worked for the 2021 local elections in Kharkiv at Dobkin’s headquarters. We are awaiting official information on Novikov. I hope that both of them will get what they deserve for their actions and will go to jail for a long time!

The muscovites are attacking Barvinkove ​​in order to enter Slovyansk from the flank and continue to Lozova-Pavlohrad. Even though the occupiers made progress, one of their armored vehicle columns was severely crushed by our heroic military.

Some of the patients of the muscovite-shelled hospital were evacuated from occupied Balakliya after lengthy negotiations finally succeeded. Terror against Ukrainian civilians

continues in the occupied areas of the Kharkiv region. It is known that the ruscists are rounding up citizens that support Ukraine in the Velykoburlutsky region—in particular, the towns of Velykyi Burluk and Prykolotne.

Evacuation of the population continues in Barvinkove ​​and Lozova. Residents of Derhachi are also urged to leave the city and, as of the beginning of the week, about 70% of people have left. But the evacuation from Borov, a village community in the center of the Kharkiv region, which was scheduled for tomorrow, was postponed. Due to the escalation of fighting in the Izium area, the road to Kramatorsk is now dangerous.

Heavy fighting is going on in Rubizhne, which is under fire, as well as shelling by ruscists in Sieverodonetsk and Lysychansk. In Rubizhne, a tank holding nitric acid was damaged as a result of the shelling and a spill occurred. The wind at the time was blowing in the direction of the occupied territories and ruscist troops. There is no information about any injuries.

Kramatorsk is also under fire; a school was destroyed. During the shelling this morning the railway tracks between Kramatorsk and Slovyansk were damaged. The railway services resumed around noon.

Ruscist troops have withdrawn from the Chernihiv region and are being put on trains in Homel. The battle for Chernihiv ended in victory for the Armed Forces of Ukraine and the ruscists’ retreat.

Fighting continues near Kherson. By the way, in the city itself, the muscovites never managed to openly hang their tricolor occupation rag, and hung instead something unrecognizable, in the style of the People’s Republic of China.

In Bucha, local residents who were killed continue to be found in apartments. Looks like this will continue for a long time… The first shootings started on the first day of the occupation. According to satellite images, on March 10, the occupiers began preparing a mass grave near the church for the inhabitants of Bucha. This was done purposefully. There should be no illusions about it.

The clearing and demining of Borodyanka village in the Kyiv region continues. There were also many locals killed there. The center of the town was destroyed. And most impressive (not to me) was the bust of the poet Taras Shevchenko that was shot. Ruscists shot not only people, not only destroyed memorials to Anti-Terrorist Operation/Joint Forces Operation soldiers, but also shot the monuments of Ukrainian writers, destroying any Ukrainian symbol. This is hatred of all Ukrainians, for everything Ukrainian. The muscovites committed and are committing genocide quite consciously and purposefully—they really want to eliminate Ukrainians and our culture.

But it’s not all bad news. The Czech Republic is giving us T-72 tanks as well as other armored vehicles. There will be more good news in the near future. Moreover, after the Bucha massacre, many countries will finally send powerful defensive and offensive weapons and equipment. The world was horrified. This was not somewhere in Africa or the Middle East, but here in Europe, near the EU. So, now we will have enough weapons, but it is a pity that this understanding by civilized countries came at such a heavy price—the lives of thousands of Ukrainians killed by ruscists…

Ruscist propagandists came to the muscovite occupied Enerhodar and Zaporizhzhya NPP to shoot their victory videos, but station workers declined to contribute—something did not work out—people do not want such “liberation.”

Agricultural machinery from the Zaporozhya region, equipped with GPS-navigators, was found in Crimea and Chechnya. A geo-tagged looting.

Funny fact. A “refugee” from Ukraine, a blogger, was evicted from the Hilton Hotel in Warsaw, where, in extremely comfortable conditions, she continued to spread the “ruSSkiy mir” (“russian world”) propaganda about how the “Ukrainian Nazis” were shelling Kharkiv.

It is right. Such “refugee” collaborators should be chased away with a broom, but it is important not to think that Ukrainians or Kharkivites are all like this. There are, of course, similar individuals. Fortunately not so many, although not as few as we would like.

Funny fact two. The muscovites were so frightened of a possible attack on them that they began digging trenches and building ground fortifications near Shebekino (a city in the Belhorod region, right on the border with Ukraine). This further increased panic among the local Russian population. A statement by the local authorities that this is “for their safety,” as I understand it, was not reassuring. The “special operation” is going according to plan—absolutely.

Today, Anton Gerashchenko, an adviser to the Minister of the Interior, received a special “there is no bottom” prize for taking a selfie in Bucha against the backdrop of black bags that held the corpses of killed and tortured Ukrainians. No comment.

Well, the traditional Darwin Award goes to the muscovite who pulled an armor plate out of his bulletproof vest and slipped in a stolen MacBook instead. Obviously this was not a good idea and he became “cargo 200” (translator: Soviet military code for cargo carrying dead soldiers). I feel sorry for the laptop that was shot though.

Let us support the military, the defense forces of Ukraine, volunteers, medics, rescuers and public utility workers. Let us help each other, keep calm, and everything will be, Ukraine!