The Muscovite attack on Kharkiv and shelling of the city have been going on for eight weeks. The amount of russist shelling is much lower today. The first half of the day was almost completely quiet, but in the afternoon the shelling started again and began to steadily intensify until the evening. 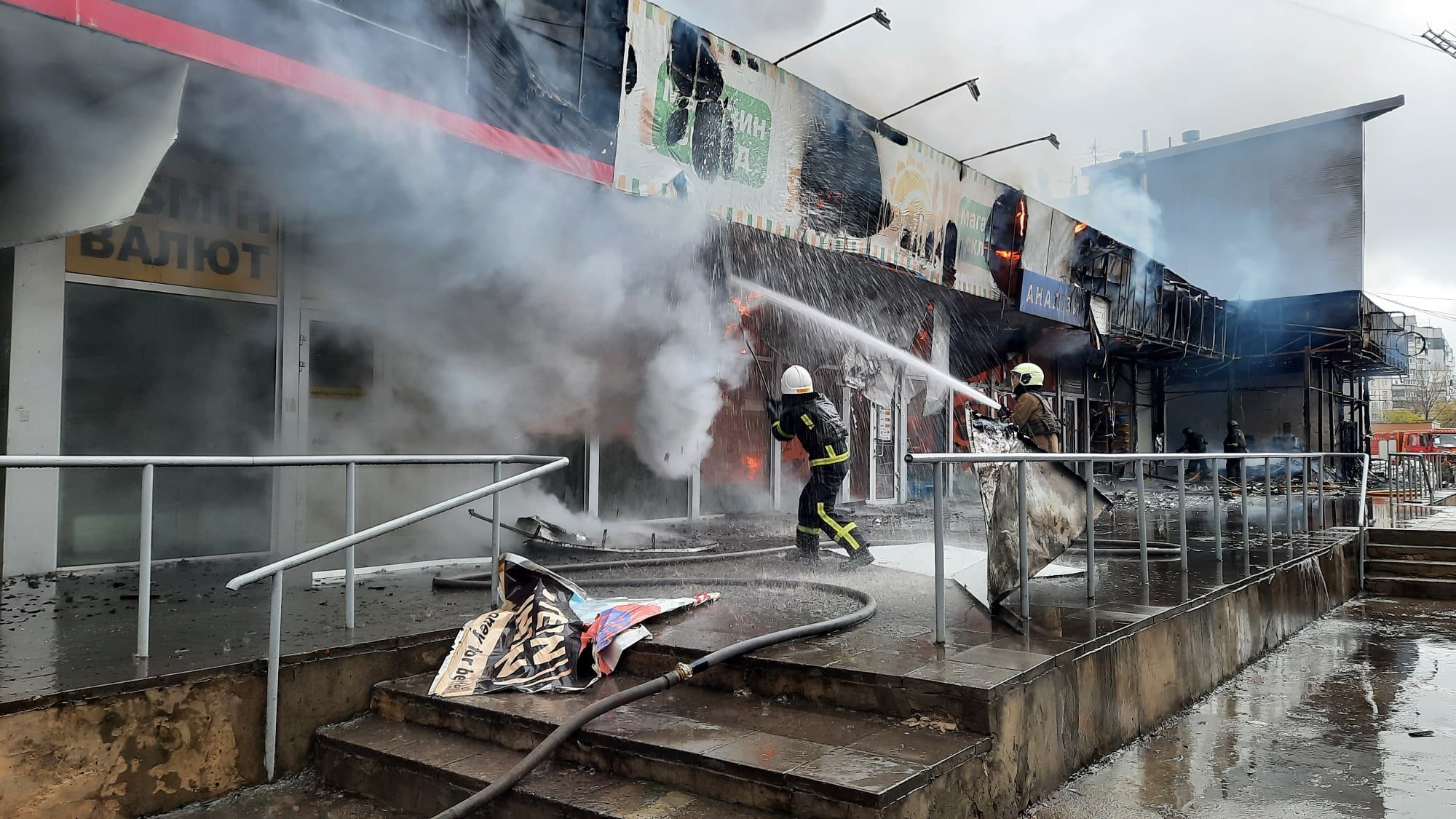 Photo Credit: Main Directorate of the State Emergency Service of Ukraine in the Kharkiv Region, CC BY 4.0

Muscovites shelled the city late Tuesday evening and in the night. However, there was silence in the morning. An unusual silence. Silence is straining. Until the evening there were no air raid sirens, for the first time in many days. It also rained all morning. But in the afternoon the muscovites began shelling the city again. At first it was not intense, but in the evening the shelling increased. Most areas of Saltivka were shelled all over again. In the evening several large fires broke out in this area again because apartment buildings were. There was shelling in other districts, too, like Pyatykhatky, Oleksiyivka, the Kharkiv Tractor Plant neighborhood, Novi Budynky, and Kholodna Hora.

The suburbs were also under fire, including Derhachi and settlements of the Derhachi Hromada, as well as the Chuhuiv side. Ambulances were damaged in Derhachi as a result of the shelling.

In Kharkiv, the Security Service of Ukraine found a conspiratorial warehouse with spare parts for equipment and ammunition for the occupation forces worth about $ 200 million. The city would become a stronghold for the muscovites, but our military, which did not allow them to advance into Kharkiv, thwarted this plan. The owners of the warehouse aimed to cooperate with and assist the occupation forces. More than 50 tank engines, spare parts for armored vehicles, as well as air-to-air missiles for aircraft were found. The Security Service stated that the people involved were identified and appropriate actions were taken.

During the shelling on Sunday, muscovites hit the McDonald’s in central Kharkiv. The police chief jokes that this was revenge, since we have McDonald’s and the muscovites do not. Although this was not the case, obviously. Most of the seemingly chaotic shelling attacks always have a target, and our team of documentaries has already learned how to identify those targets.

The number of damaged houses and social infrastructure buildings is growing every day.

There are lots of cars on the roads, and having functioning traffic lights really helps at difficult intersections. Velykden (translator’s note: Ukrainian Orthodox Easter) cakes have already appeared in stores. The regional authorities will impose Velykden restrictions. So far, they have not been announced in detail, but their principles will be based on the 2020 Velykden restrictions. The safety of people is the most important thing now.

Interestingly enough, (Kharkiv Mayor Hennadiy) Kernes’s stepson, Rodion Gaisinsky, bought bulletproof vests, which were given to public utilities workers and rescuers in Kharkiv, and the vans used by Kernes were donated to the army. What can I say, other than thank you? But this begs the question: What about (Ukrainian business tycoon Oleksandr) Yaroslavsky, who fled to Great Britain? Nobody has heard from him since either late February or early March. The same applies to (former Kharkiv Mayor) Misha Dobkin. Where are they all now???

Internet providers in Kharkiv are installing networks in the basements and shelters to keep people connected. That’s exactly the right thing to do, as far as I’m concerned.

As for the broader region, everything is complicated there. Fighting continues in the Izium area and in the Barvinkove direction. Our military heroically restrains the attacks of the muscovites, who are constantly changing the direction of the strikes. Both Barvinkove and Lozova, from which evacuation of the population is underway, came under fire on Wednesday. The muscovites also withdrew part of their troops to the Staraya Hnylycia area in order to prevent the Armed Forces from expanding their success on the Malynivskiy bridgehead.

Heavy fighting is taking place in the Joint Forces Operation zone for Kreminna, Rubizhne, and Popasna. Russists are shelling Severodonetsk and Lysychansk. Attempts of muscovite assaults in this area were beaten back. Attacks on Toretsk, Avdiivka, and Marinka continue. The occupiers are trying to attack Vuhledar, Velyka Novosilkam in the Donetsk region, and Huliaipole in Zaporizhzhya.

Things are also difficult in Mariupol. It is constantly being shelled with all artillery and aircraft. The occupiers do not provide a corridor for evacuation of civilians as a matter of principle.

The muscovites also continue to fire from jet artillery on Mykolaiv and the surrounding area.

In Berdyansk, the occupiers appointed a local janitor, Mykita Samoilenko, to be a “deputy mayor,” and he is currently preparing for the May 9 celebrations. Everything is so bad with the russist cadres that the occupation administration has to recruit outright marginals. Well, at least they’re not recruiting drunks (although this is not a fact), like Kadyrov’s troops do in their TikTok videos.

And in Kherson, the muscovites killed a local collaborator, activist blogger Valery Kuleshov. The details are unknown, but the facts show that the muscovites do not need overly active collaborators. Also in Henichesk, some time ago. unknown patriots burned down the building of the local military recruitment office.

According to the Prosecutor General’s Office, as a result of the muscovite invasion of Ukraine, more than 200 children have been killed and more than 370 injured.

More than 2,000 doctors from other countries have expressed a desire to come to Ukraine to help Ukrainians. Thank you for your solidarity.

Personal belongings of sailors from the cruiser “Moskva” have begun to wash ashore in the Odessa region. Well, at least they managed to reach Odessa this way.

It is not quiet at all in moscovia. On Tuesday morning, someone hacked into one of Moscow’s schools and played the Ukrainian national anthem over the PA. Russist parents were outraged: What is this about “Glory to Ukraine?” Their cybersecurity is on the level for sure. At another school, in Belgorod, someone again hacked into the system, turned on the air raid siren, and announced that everyone has to go to bomb shelters, in Ukrainian and in English.