Today, the amount of muscovite shelling attacks increased from yesterday, but there weren’t too many overall. They mainly hit Saltivka. Unfortunately, there are damaged houses, destroyed businesses, and wounded people.

On a positive note, our military continues to liberate suburban settlements, and residents of the liberated villages are being evacuated. 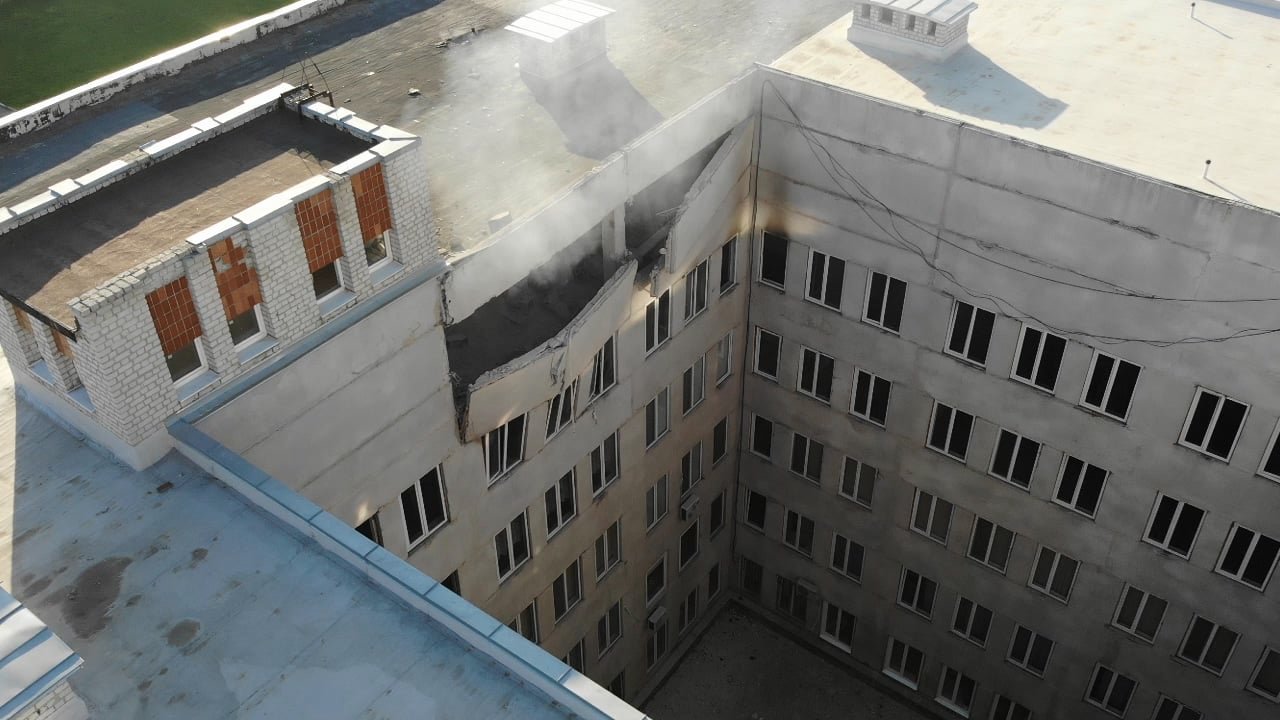 Photo: Main Directorate of the State Emergency Service of Ukraine in Kharkiv Region, CC BY 4.0

April has come to an end. For more than two months, Ukrainian troops have been successfully defending Kharkiv. Most of today’s shelling happened at night. Things were restless in different parts of Saltivka. There was activity in the morning and in the evening. Pivnichna Saltivka and Skhidna Saltivka were hit the most. A maternity hospital was seriously damaged, even though it had already been hit earlier. That earlier attack directly hit the building’s roof, which we just recently documented.

Nemyshlya got hit as well. Warehouses and one of the industrial businesses there were fired upon. Fire crews managed to extinguish the fire caused by the night shelling only by the middle of the day. Pyatykhatky and Selyshche Zhukovskoho also got shelled occasionally. There were no serious strikes in other areas.

Shelling of the suburban area continued. The Derhachi Hromada was hit, as was the village of Udy, in the Zolochiv Hromada, where the shelling started at night and continued until the morning, damaging more than 10 houses, a shop, a school, and a daycare center. Fortunately, nobody was wounded.

There is also positive news. After liberating Kutuzivka, our military also liberated the village of Verkhnya Rohanka and the villages of Slobidske and Prelesne, in the Vilkhiv Hromada. This means that all settlements of the Vilkhiv Hromada have now been liberated. As I’ve already said, there is now a prospect of moving further east, along the Starosaltivska highway, to Shestakovo and Fedorivka, from where muscovites continue to bombard the city from time to time. But the shelling is not very intense now, because our military has forced the ruscists to do other things.

Humanitarian aid was delivered to Kutuzivka, and people who wanted to leave for safe places were evacuated. Evacuation from Ruska Lozova is underway. The occupiers looted every place they were in, stealing everything from utensils and tools to toilets and children’s toys. The villages are badly damaged; many houses are damaged and ruined.

As for Kharkiv, the city continues living in wartime conditions. People are clearing the ruins and planting flowers. Gorky Park is posting pictures on Instagram that show what it looks like without people. This is one side of the coin. The other is the danger, which has decreased a little overall, but there’s still the occasional shelling in different areas, making things more dangerous, like a “russian roulette.”

There are still people living in Pivnichna Saltivka and Pyatykhatky. Not many, just a few per building on average.

There are different reasons people stay. Some of them have not left because they have nowhere to go. Maybe they have no money to rent elsewhere. Maybe they have no-one waiting for them elsewhere. And maybe they simply don’t want to leave their homes. Some of them have health problems or feel obligated to protect their housing and the area. Those who have the strengths are trying to deal with looters, who have been ransacking apartments in empty areas over the last few weeks, especially in Pivnichna Saltivka, other neighborhoods of the Saltivka district, Selyshche Zhukovskoho, Obriy. I’ve heard from acquaintances that some of the apartments in my building have been broken into. Law enforcement and Territorial Defense are fighting this as much as possible.

The situation in Kharkiv has stabilized to a certain extent. There are no new changes to city life, so I haven’t written many sketches about the life of Kharkivites lately.

The situation elsewhere in the region is difficult. Fighting is ongoing in the Slovyansk and Barvinkove directions, but our brave warriors are stopping the muscovites’ attacks and preventing them from advancing. The city of Barvinkove is shelled daily with artillery. There are many funnels where the birds swim now, many damaged and destroyed houses. However, there are still people who do not want to leave for various reasons.

In the temporarily occupied territories of the Kharkiv region, people continue to be deported to moscovia. Men are carefully checked, forced to undress to the waist. Their personal belongings and telephones are checked. There is food in the stores in the Borivka Hromada, but the selection is very small and the prices are high. There is also an acute shortage of bread.

Also in the Kharkiv region, sowing is underway in government-controlled areas. According to the Kharkiv Regional State Administration, 60-80% of the area will be sown, depending on the intensity of the fighting.

In the Derhachi region, another priest of the Russian Orthodox Church was detained for spreading muscovite messages on social networks and wished the occupiers would come. He is now repenting, as he faces the possibility of a real prison term.

Fighting continues in the Joint Forces Operation zone: in the Lyman area (the side of Rubtsy and Zarichny, of the Lyman Hromada), for Rubizhne and Popasna, near Sievierodonetsk. The ruscists are also storming Avdiivka, Maryinka, Velyka Novosilka (in the Donetsk region), and in the direction of Huliaipole in the Zaporizhzhya region.

Muscovites strike Zaporizhzhya, settlements in the region, and the Dnipropetrovsk region with artillery and missiles. Rocket fire has also been aimed at Odessa, where an airport runway has been destroyed.

In Nova Kakhovka, the ruscists erected a monument to Lenin. I am convinced once again that the monuments to all communist figures should have been melted or smashed to pieces, so that there would be nothing to restore and re-erect. In Tokmak, Zaporizhzhya, the occupiers removed the Coat of Arms of Ukraine from the City Council building. The occupiers care what monument stands where and how a street is called, and what symbols hang on the administrative buildings.

Things aren’t quiet in moscovia. Explosions and shelling are taking place in the Belhorod and Kursk regions; a large fire broke out at the Sakhalin TPP-2 (power plant), which became operational only in 2019.

Funny fact. (former Kharkiv mayor) Misha Dobkin, who had disappeared from the radar despite having promised to help our military, is now a deacon of the Russian Orthodox Church. He was seen in one of the churches in Kharkiv, it appears. He has always had a talent for doing everything half-ass. I’ll leave this without comment.

Today’s Darwin Award goes to a group of muscovites who wandered around the villages in the Izium district, overseen by (Ukraine’s) 92nd Mechanized Brigade, named after Ivan Sirko. As a result of two bombs dropped from a drone, all members of the looter group were either wounded or killed. Particularly epic was a direct hit through the sunroof of the Zhiguli. It was simply beautiful.