The shelling of the city has intensified, which seems to be a response to the actions of our boys. The northern outskirts of Kharkiv were hit the most. The fighting is now to the north of the city. There are battles in the area of ​​Staryi Saltiv. Heavy fighting continues in the southeast, but without much success for the muscovites.

While the amount of shelling in the city increased today, I wouldn’t call it critically high. Most of it hit Pivnichna Saltivka, other districts of Saltivka, and Velyka Danylivka. The ruscists also bombarded Selyshche Zhukovskoho, Pyatykhatky, Oleksiyivka, and its environs. The area of Obriy also got hit. In Saltivka, garages and apartment buildings were hit again, causing fires to break out. 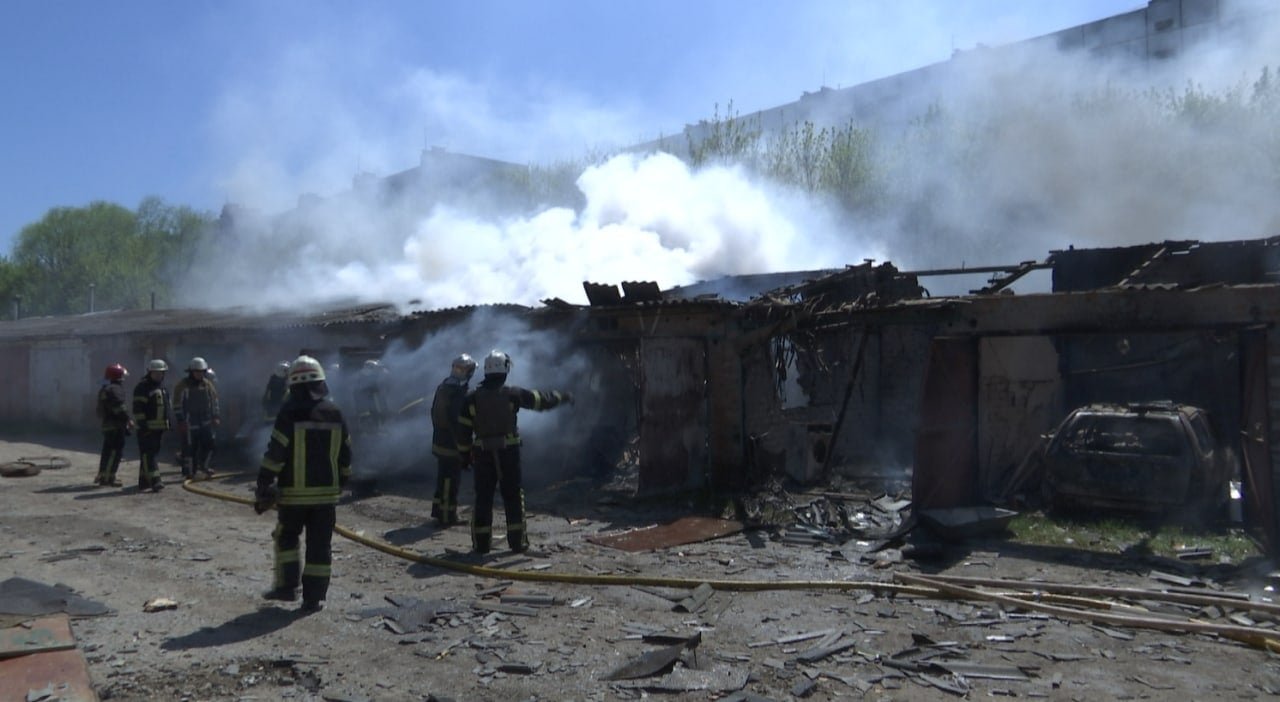 Photo: Main Directorate of the State Emergency Service of Ukraine in the Kharkiv Region, CC BY 4.0

The muscovites seriously shelled the northern outskirts of the city: Prudyanka and Slatyne; Derhachi, in the Dergachi Hromada; the villages of Mala Danylivka and Ruska Lozova, in the Malodanylivska Hromada.

The Zolochiv Hromada is also under fire. Since the beginning of the all-out muscovite invasion, 22 people have been killed there and about 60 wounded; about 700 buildings were destroyed and damaged, including schools,daycare centers, and medical establishments.

In temporarily occupied territory, in the village of Makarove, Zolochiv Hromada, located near Kozacha Lopan, a sniper shot and killed an employee of one of the agricultural businesses who was at work.

Fighting continues to the north of Kharkiv. They say a bridge across the Murom River in Ruska Lozova has been blown up. But, according to the locals, this is not the main bridge, so the muscovites still have a connection with Lyptsi. Fighting continues in the Staryi Saltiv area, which the muscovites attempted to take back. Serhiy Bobok, a Kharkiv military journalist, writes that the ruscists were surprised when they saw that there were computers in a school. No wonder they steal everything.

The greatness of moscovia is not what you’ll see in Moscow, St. Petersburg, or Yekaterinburg. It’s in the villages where people have never seen asphalt. Here in Ukraine, villages without paved central streets are considered deep country. Same is with computers, nearly all schools have at least old ones, while the muscovites don’t have anything like that. A great oil-and-gas state. It’s still too early to talk about an official liberation of Staryi Saltiv. Ongoing fighting isn’t the same as clearing and consolidating positions, because there’s still the danger of losing control.

Mayor Terekhov announced an extended curfew for May 8th and 9th, to protect the city from provocations. This is a good call, considering that walking in the area of ​​the Memorial in Lisopark, which has been shelled more than once or twice, is simply dangerous. Additionally, “vata” (translator: a pejorative referring to Russians who are loyal to Putin) can also come out, in which case they will have to have a chat with the authorities. For general security, such restrictions are for the best.

Today, after the application “Alarm!” was updated, there was another alert about artillery fire, but fortunately nothing could be heard in the area where I live. That’s good.

Arestovich was criticized on social networks today for saying that the artillery had been pushed away from Kharkiv. First of all, it was mostly mortar and short-range artillery that was pushed out—the heaviest and the cheapest stuff. I’ve already explained about the multiple-rocket launchers. They can shoot from as far as 120 km away, but they cannot hit specific targets, they’re only meant for intimidation. Arestovich is once again reassuring “housewives” who are sitting in their homes in Western Ukraine worried about their men. It works for that audience, but here in Kharkiv we rely on our hearing, experience, and sixth sense.

A police major was detained in Kharkiv for passing information about Kharkiv defenders’ locations and photos of buildings to his cousin who served in the Belhorod OMON.

Elsewhere in the region, the situation remains difficult in the Slovyansk and Barvinkove directions, but our boys are holding the line. Settlements of the Nadezhdivskyi Starostynskyi district of the Lozova Hromada were shelled. As a result, one person was killed and numerous houses were damaged and destroyed.

In the occupied territories, muscovites make maximum use of medical facilities to treat their wounded. When groups of cars from Vovchansk tried to break through Rubizhne to Staryi Saltiv, the ruscists shot at them. There are dead and wounded. In the Borivka Hromada, the muscovites are preparing defensive lines to prepare for our counteroffensive actions.

Heavy fighting continues in the Joint Forces Operation zone, in the area of Lyman, on the banks of Siverskyi Donets, in the Yampil area, and in the area of ​​Rubizhne, Sievierodonetsk, Popasna, Avdiivka, Maryinka, Velyka Novosilka, Huliaipole, and Orikhivo. These cities are being shelled constantly, while rocket attacks target Kramatorsk, where 25 people were wounded.

The situation in Mariupol is extremely difficult. I hope that the rest of the civilians who are hiding in the dungeons of Azovstal will be able to evacuate on Friday. Meanwhile, battles are already taking place on the plant’s territory.

The muscovites are stealing food from the occupied territories of Kherson, Zaporizhzhya, and Luhansk. Unfortunately, if these territories are not liberated from occupation by fall, there will be a real famine. The muscovites will not feed the population, that’s not why they’re stealing the food. Their goal is to keep prices stable in the territories bordering Ukraine at least until fall, as they hope that by that time they will have captured as much of our territory as possible.

One of the pro-muscovite propagandists was detained in Spain. However, he was released on bail. And the extradition will take a long time. Americans have not been able to get Firtash out from Austria for 8 years. And the muscovites will provide him with lawyers. Now he will not be able to go anywhere else. Well, at least we have that.

Things haven’t been quiet in moscovia. There have been explosions in Belhorod. Villages bordering Ukraine—Nekhtoteevka and Zhuravlevka, of the Belgorod region—have been hit, according to  the local governor, but it definitely wasn’t us. Mines have been left in Bryansk schools.

Funny stuff. The muscovite colonel general Alexander Lapin awarded to his son Denis a medal for “liberation of the Chernihiv region.” It was a liberation done by retreating under pressure from the Armed Forces of Ukraine.

This is how ruscists “capture” and “liberate” everything.

Let us believe in and support the Armed Forces, the National Security Service, and the Territorial Defense Forces! With such defenders we will definitely win!