Looks like there was some shelling in Kharkiv after all. The Kharkiv Regional State Administration even reported that two people had been wounded. There’s a difficult situation with shelling in Kharkiv’s northern suburbs. There’s fighting to the south of the city, where Ukrainian defenders are holding the line.

All day I thought I would write tonight that there hadn’t been any shelling in Kharkiv. Even the mayor, Terekhov, said as much in the evening. Later, however, the head of the regional administration said that there had been attacks after all, which left the two people wounded. The shelling happened somewhere on the outskirts of Pyatykhatky and Pivnichna Saltivka or Velyka Danylivka. It’s quite possible that the people were wounded in the ring road area on the Saltivka side, where an attack definitely happened, as far as I know. 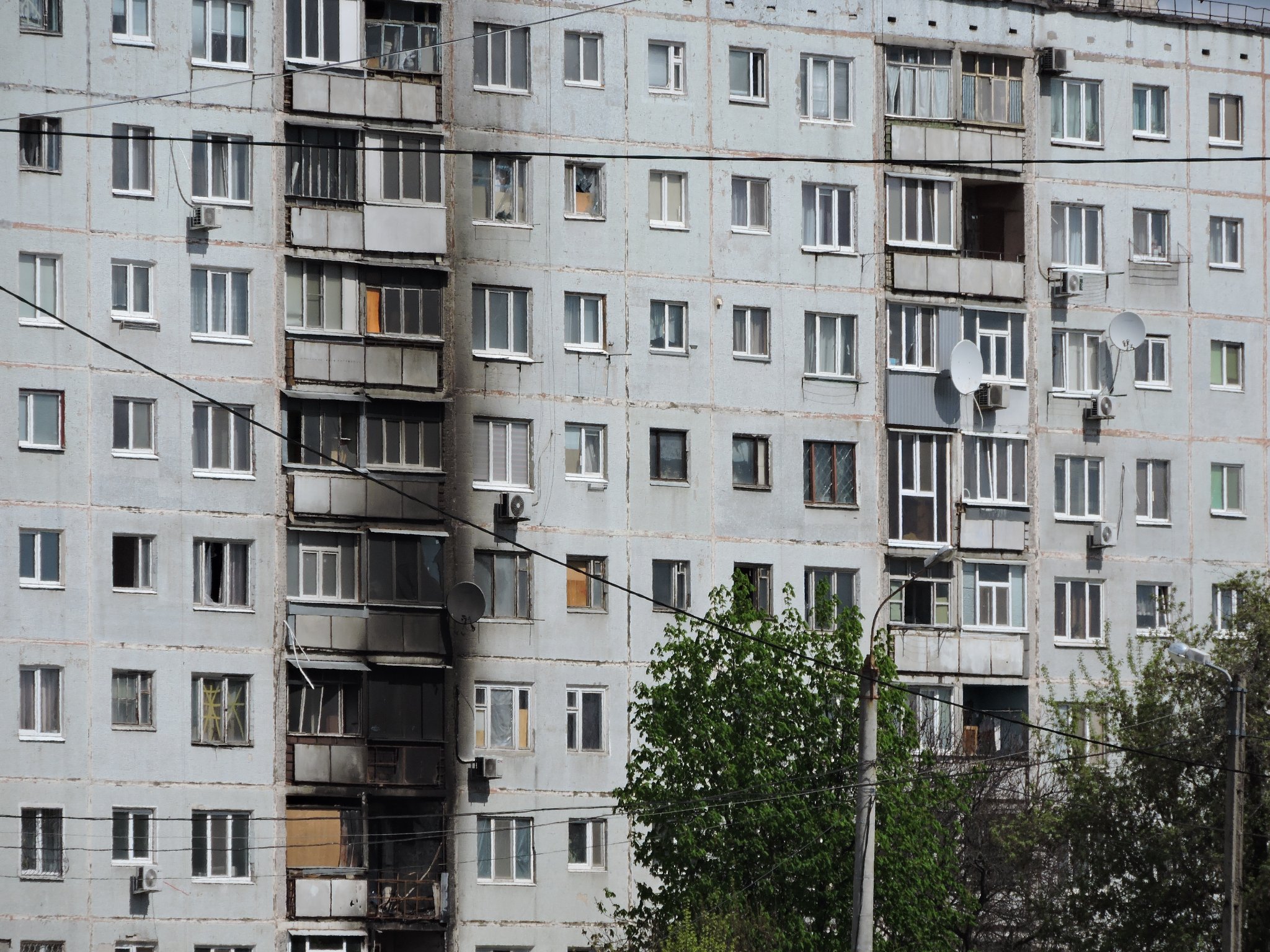 North of Kharkiv, the muscovites are shelling the recently liberated Tsyrkuny, Ruska Lozova, in the Derhachi Hromada. A total of six people were wounded today in the region, according to the Kharkiv Regional State Administration. Unfortunately, we don’t know where exactly these incidents happened. But it’s a fact that returning to the villages that were just liberated, even only to pick up one’s belongings, is unsafe, both because of the shelling and because of the mines that the occupiers left behind. Even professional bomb technicians have suffered heavy injuries, and there’s now a drive to collect money for their treatment, which will take a long time.

There’s good news from the frontline. First, the General Staff has officially confirmed that a Ukrainian offensive has pushed muscovites out of the villages of Rubizhne and Bayrak, of the Vovchansk Hromada. Verhniy Salitiv and Zamulivka have also been freed. Next, it’s been officially announced that Cherkaski Tyshky and Russki Tyshky have been liberated. This is good, because it means the frontline has been pushed even further north, and that the fighting in the Lyptsi direction is taking place somewhere near Lyptsi itself. In the evening, the special unit Kraken (225th battalion of the 127th brigade of the Ukraine Armed Forces’ Territorial Defense) reported the liberation of the village of Pytomnyk, Derhachi Hromada, located on the road between Kharkiv and Belhorod. Ruska Lozova is located in the basin of Lozovenka River, while Pytomnyk sits on a hill. There’s a nice highrise there, which the muscovites shelled Kharkiv from. After heavy battles, the village is liberated, and our troops have consolidated positions there, lengthening the safety belt north of Kharkiv. If they free a few more settlements, field artillery will no longer be able to reach Kharkiv (its range is between 15 km and 18 km), leaving only long-range artillery (like the 2S19 Msta self-propelled howitzers) and multiple-rocket launchers. Let us pray for our troops, because the picture being drawn on muscovite online forums is getting very dark for the muscovites. From the other side, there’s fighting along the entire frontline. The General Staff reported that the ruscists threw about 500 conscripts from the temporarily occupied territories to hold the Kharkiv direction.

It’s quiet in Kharkiv. Very few people are on the streets. Same with cars. The main problem is fuel. There’s simply not enough of it, so the amount of driving has gone down. In addition, the weather isn’t warm enough to be conducive to strolling.

A Kharkiv City Council meeting is scheduled for Wednesday. The agenda, among other things, includes breaking ties with sister cities in moscovia: St. Petersburg, Belhorod, Nyzhniy Novhorod, Novosybirsk. It would be good to do the same with Minsk.

There are also plans to change four toponyms: Moskovskyi district (that’s where I lived before the start of the full-scale invasion), Moskovskyi Prospekt (translator: a main artery street), Bilhorodske highway, and Bilhorodskyi descent. The city government has lobbied the Toponymic Commission to rename accordingly the Saltivskyi distinct, Heroiv Kharkova Street, the Kharkiv Highway, and Heroiv Ryatuvalnykiv Street. Later, in the project description handed out to the council members, Moskovskyi Prospect was already renamed to Zakhysnykiv Kharkova Prospekt. By the way, such startling changes, made several times a day, was something that also happened during the time of decommunization in 2015. I have a feeling there will be new variations on Wednesday morning.

Therefore, the Kharkiv Toponymic Commission (I have the honor of being one of the commissioners), which because of the city government’s rushed actions was unable to present a concept for the renaming (and there are more than 400 toponyms that need to be changed), is going to propose during the May 11 City Council meeting to rename Moscovskyi District to Saltivskyi (not a single objection here) and to postpone the rest of the renaming until the next session. Meanwhile, the commission proposes to kick off a public discussion of the changes, do away with backroom toponymics, and agree on and present a holistic concept of toponymic changes aimed at presenting Kharkiv as a Ukrainian and a European city. All this requires involvement in creation of the concept and development of proposals by Kharkiv toponymy researchers, local historians, artists, scientists, and so on. Correct and clear requirements need to be established. Otherwise, these rushed actions are hard to call anything other than an exercise in creating artificial local patriotism without a clear identity (be it Ukrainian or European). For 2.5 months mayor Terekhov has been pushing the “we’re all Kharkivites; we’re together” message, which proves this artificiality. He hasn’t said a word about Ukrainian unity or European values. All he talks about is some special Kharkiv uniqueness. This is very reminiscent of the way the Soviets tried to artificially create “unity among the soviet people,” people without an origin or a tribe.

Now that things have quieted down in Kharkiv, its political life has started percolating. The mayor has also promised to relaunch public transportation in the city next week. In general, this can be done in a limited way. Transportation can be launched in the southern part of the city and to connect the south to the city center. But I would wait another week or week and a half, until our troops push the muscovites further to the north and consolidate their new positions. Of course, that doesn’t protect us from rocket fire, but it can only aim within a 25 km range. (That is if you’re talking about Grad rockets, because Urahan rockets have a longer range and can cover the entire city.) But to be honest, it’s better to wait just a little bit more. Public transport does need to be relaunched, albeit cautiously and only in districts other than those to the north of Kharkiv city center.

The city perinatal center on Saltivka, which came under muscovite artillery fire several times, has reopened. It provides specialist consultations and ultrasound.

Two dead bodies of muscovite soldiers and three of civilians were found in the ring road, near the Lyptsi exit. This area was a frontline and was constantly shelled for two and a half months. (It still gets shelled from time to time.) Someone even managed to hide one of the dead civilians in a grave near the road while under fire.

Tsyrkuny is being demined. As Oleh Synehubov, governor of the Kharkiv region, put it, “Tsyrkuny right now is one big war crime.” A large amount of houses are destroyed or damaged, same with administrative buildings and the school. Bodies of city residents have been found. The occupiers didn’t take away their own dead soldiers, who are being found even inside private residences. By the way, lots of dead bodies of muscovite troops are being found in the liberated settlements. They’re being collected and stored in refrigerated railroad cars. Meanwhile, the ruscists don’t want to take these bodies away. They don’t need them.

Yuriy Butusov told a story from one of the pages of the war. During the liberation of Staryi Saltov, on May 4, 2022, the muscovites threw a tactical group (possibly from the 1st Guards Tank Army) to counterattack. They were met by the 227th battalion of the 127th brigade of the Armed Forces of Ukraine. They destroyed several units of the ruscists’ armed vehicles (they used a Carl Gustaf recoilless rifle to destroy T-90M “Proryv,” the shell pierced right through that “newly developed” tank technology), and even managed to take some trophies, even equipment. They’re gradually becoming a motorized infantry unit.

Battles are ongoing on the Slovyansk and Barvinkove directions. Our troops are holding defense, but it’s hard to do. Barvinkove is being shelled, as are settlements of the Izium and Lozova districts. Two people were wounded here today overall.

Another person has died in the occupied territory of the Kupyansk district. In the temporarily occupied town of Velykyi Burluk (center of the Velykoburlutska hromada) some patriots hung fliers that say, “We’re close, and we’re working,” and that death awaits the occupiers and those who support them. Velykyi Burluk is part of Ukraine. The muscovites are currently looking for the people who hung those fliers all around town.

In Izium, the ruscsts organized work to clear out the rubble of destroyed buildings in the city. They’re offering residents to work in exchange for food. Some people hesitantly agree. Bodies of 44 people were found during this work in one of the destroyed five-story buildings, according to city officials. The situation in the city is difficult. There’s no gas or power. The occupiers have made repairs on a few places, it’s unstable. Food products are expensive. Some people, who are able to, leave town using guerilla routes and make up legends to get through occupier checkpoints as they drive out of Izium and Balakliya. Men get undressed and all their things get thoroughly checked. A big portion of the people living the city drive to Belhorod and then try to get to Latvia, Estonia, or Finland, where Ukrainians are accepted even with an internal Ukrainian passport, as refugees.

There’s heavy fighting in the Lyman and Sievierodonetsk direction. The muscovites attempted to cross Siverskyi Donets, but, according to the Luhansk region governor and the General Staff, our troops stopped these attempts, destroyed the pontoon crossings, and are currently clearing out the area. All settlements of the Luhansk region that are under the control of the Ukrainian government are left without power, gas, and communications due to infrastructure damage. The situation is difficult. Fighting is ongoing near Popasna, but the ruscists have already announced that they’ve reached the administrative borders of the Luhansk region. (As usual, the most important thing is to make a loud announcement.)

The ruscists are constantly shelling Azovstal from all their artillery and bombing it with short-range and long-range aviation bombers. Our defenders are holding on at the edge of what’s possible. There are more than 100 civilians still with them who still haven’t been evacuated. Muscovites are transporting grain and vegetables out of occupied territories in the south of Ukraine to Crimea. A portion of the grain is being transported by ships, probably to Syria.

The territories of Chernihiv and Sumy regions that border moscovia are constantly under artillery fire. A few days ago, they shelled the Jewish cemetery in Hlukhov, in the Sumy region, badly damaging it. Today, there were aviation strikes on territories of the Shostkynska and Esmanska hromadas. Buildings were destroyed and damaged in Voronizh, Shostkynska hromada.

Things aren’t calm again near Belhorod, in Moscovia: explosions could be heard there again. It’s already a common occurrence there. Explosions were heard in Crimea as well. Also, Rutube (the muscovite version of YouTube) went down. They say that a portion of the data was corrupted, but these are only rumors for now.

Since I don’t have a Darwin Award to give out today, I’m going to end with some cute news. Rescuers in Uman rescued a cat as they were putting out a fire. They reanimated him with water and let him breathe some compressed air. The kitty is now alive and well.