There weren’t any strikes of Kharkiv itself today, but the muscovites continue shelling areas to the north of the city. Pechenihy, near Chuhuiv was struck again, as well as Merefa. Fighting continues north of the city; the muscovite resistance is strong. Similarly, fighting is ongoing in the southeast.

Also shelled in the north were the towns of Slatyne and Prudyanka, the village of Ruska Lozova, and Pytomnyk, of the Derhachi Hromada. Tsyrkuny, Ruski Tyshky, and Cherkasy Tushky, of the Tsyrkuny Hromada, were attacked as well.

The muscovites also fired on the villages of Udy and Huryiv Kozachok, of the Zolochiv Hromada, damaging residential buildings. Huryiv Kozachok, located on the border with moscovia, was historically home to a muscovites Staroviry (Old Believers) community. The ancestors of Andriy Huriev, a muscovite businessman and former member of the muscovite Security Council, come from this place. He and his son are currently under sanctions. Merefa was hit (residential buildings and a high-voltage line were damaged), as was the Chuhuiv district, and the town of Pecheniha, center of the Pechenizka Hromada. As a result, one person was wounded. 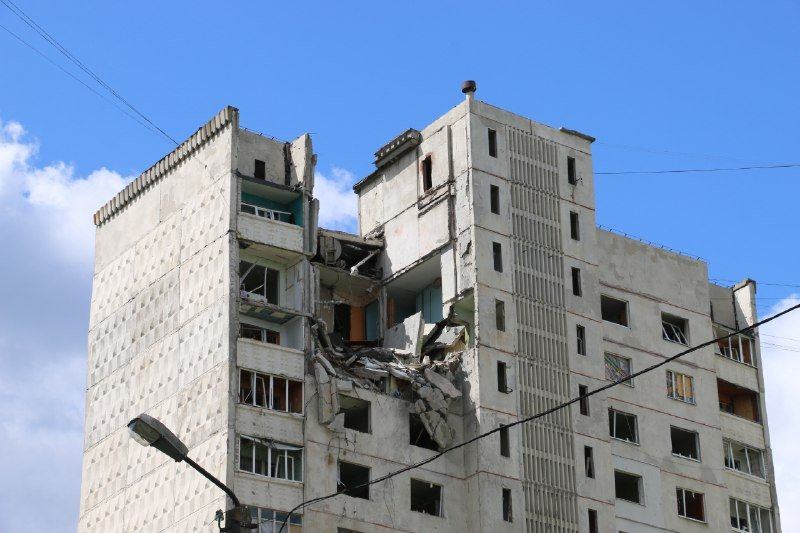 One of the partially destroyed houses in Obriy. Photo: Main Directorate of the State Emergency Service of Ukraine in the Kharkiv Region, CC BY SA 4.0

Fighting continues north of Kharkiv. The ruscists sent additional units here in order to maintain a bridgehead in the area of ​​Kozacha Lopan, Hoptivka, and Lyptsi. It takes literally a lot of blood and sweat to liberate every meter of territory. The 227th Battalion of the 127th Territorial Defense Brigade of the Armed Forces of Ukraine reported the deaths of five servicemen during the liberation of Staryi Saltiv and Izbytsky in the Kharkiv region. Based on this information, we can conclude that in addition to the village of Ternova, in the Lipetsk Hromada, and the village of Izbytske, of the Vovchansk Hromada, were also liberated.

Volunteers from Ruska Lozova deliver humanitarian aid to Tsyrkuny, Cherkasy, and Rusky Tushky, but they have to do everything very quickly. When the muscovites detect the presence of traffic and crowds, they start shelling. It’s dangerous to travel there, let alone come back.

Аs soon as people rushed back to Kharkiv en masse, so did the inhabitants of the northern suburbs. Similarly, people have decided it’s possible to return to Derhachi, which is being shelled daily. Local and regional authorities and the military are constantly urging people not to return to the northern suburbs, but some folks prove difficult to convince. What drives these people and whether they have any remnants of common sense are very good questions…

People are also trying to return to Pivnichna Saltivka, Selyshche Zhukovskoho, and Pyatykhatky. But there is no power (only in some places), gas, or sometimes even water. There are no shops or any other infrastructure. The best you can do is check if the apartment has survived, board up the windows, take your things, and go back to where you came from. Or, you can try to find housing somewhere else in Kharkiv. By the way, there is no housing market in the city to speak of. Rents have fallen and the southern parts of the city, where shelling has been less extensive and level of damage the lowest, are the most in-demand. This was obvious to me. As soon as the market becomes more active, it will decide for itself. Housing in the northern districts of the city, for example in Oleksiyivka, has been the cheapest. That’s because of the greater danger there (the infrastructure there has not been severely damaged).

Infrastructure is being restored in Kharkiv. Power lines are being repaired in Saltivka and Pivnichna Saltivka, Selyshche Zhukovskoho, and Pyatykhatky. Gas and water mains are also being repaired, although it’s a slower process. The city has electric vehicles. I tried to take the trolleybuses, to see how well they work. The wait times are long, and the vehicles are really packed in the daytime. Those who do not need to go far prefer walking, because they are not used to crowded and overheated trolleybuses. The routes get activated during weekdays. They mainly connect the center with the surrounding areas. People are also discussing the launch of the metro in the near future, the technical aspects of the tunnel’s integrity, and the metro bridge.

There are more and more cars and people out on the streets every day. Back in April, come 3 pm and the city would usually get empty. Now, it happens no earlier than 7 pm. The businesses, mostly mid-size and small, are gradually opening or being prepared to open (the ones that haven’t been damaged by the war).

Sale of hard liquor in Kharkiv and the region has been banned again and until martial law is lifted. Beer and other low-alcohol-content beverages can be sold between 9 am and 3 pm, and from 9 am to 9 pm in cafes and restaurants. This is the right decision from the security point of view, but in some respects it’s contradictory (particularly from the point of view of restarting the economy).

Administrative Services Centers will open in Kharkiv starting May 18. Currently, the list of services is quite limited, but these are definitely positive changes.

Rescuers continue to dismantle the debris of damaged highrises in the city, removing the elements of structures that hang dangerously. There are many more such buildings and more work of this kind in the city.

Muscovites are actively attacking Lymansky, Sievierodonetsk, Bakhmut, Avdiivka, Maryinsky, Huliaipole, and Orikhiv directions. They are shelling the cities of the Donetsk region. In order to distract some of our troops from these areas, shelling and provocations are being initiated in the Sumy and Chernihiv regions.

Things are not quiet in moscovia. There was another explosion in Belhorod. In addition, muscovites shelled themselves in the Kursk region.

Today’s Darwin Award goes to the muscovite from a village in the Usolsky district of the Irkutsk region, who got so drunk on May 9, that after an argument with his sister about why she did not go to the action “Immortal Regiment” in their village, he grabbed a knife and killed her.

Let us believe in our defenders, our Armed Forces! Let us help volunteers, medics, rescuers. And we know that everything will be, Ukraine!