The shelling of Kharkiv continues. The strikes were isolated and quite rare on this day. There were a few strikes in the vicinity of Oleksiyivka and Pivnichna Saltivka. A nighttime rocket strike hit an industrial facility in the National Aerospace University area, according to the regional prosecutor’s office. There was no more shelling on the day. I will note that as early as Friday morning new information was disseminated on Telegram channels saying that shelling of Kharkiv may intensify over the weekend, since 12 June is moscovia day.

Meanwhile, muscovite shelling of the suburbs north and east of Kharkiv continues, and it’s quite intense. The ruscists are shelling virtually all the settlements, including Ruski Tyshky, Cherkaski Tyshky, Tsyrkuny, Ruska Lozova, Tsupivka, Bezruky, Prudyanka, Slatyne, Derhachi, and Mala Danylivka. In Malaya Danylivka a fire broke out and spread across single-family houses as a result of the shelling. There was also intense shelling in the village of Zolochiv, where two people were killed, and in parts of the village of Udy, of the Zolochiv Hromada. There was shelling of Verkhniy Saltov and the Chuhuiv district. The death toll from yesterday’s shelling of the village of Korobochkyne has risen to five. Unfortunately, it looks like the man who was wounded in or on the way to the hospital. 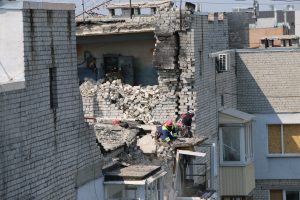 Clearing of the debris from a partially damaged building in Kharkiv. Photo: State Emergency Service of Ukraine in the Kharkiv Region. CC BY 4.0

To the north of Kharkiv, fighting continues: in the area of ​​Tsupivka and Velyky Prohody; in the Borschova area, in Ruski Tyshky and Ternova, of the Lipetsk Hromada; Bayrak and Rubizhne, of the Vovchansk Hromada.

Now a little about life in the city. The markets in Kharkiv have generally resumed business. Even some specialized stores, like the ones selling coffee and tea, are open. About 20% of outlets in the Barabashovo market are in operation. This market was shelled four times, and some of the outlets there were destroyed or damaged.

Mayor Terekhov has become less public in recent days, and the rhetoric in his statements has changed. Earlier, in mid-May, he would indirectly announce the restoration of the city and called on entrepreneurs to resume business. But now he is talking about the possibility of new muscovite attempts to attack in the Kharkiv direction. So, people should decide for themselves whether it’s worth returning to the city, considering that shelling of the northern neighborhoods continues, and that there is constant danger of missile strikes and shelling of any part of Kharkiv.

Overall, Terekhov is a separate issue. He is now saying that his statement on the second day of the muscovite invasion about a “diplomatic settlement” was meant to protect Kharkiv from shelling. But it was perceived differently at the time. And Filatov’s meeting with his associates, leaked on the internet, was perceived the same way. You can shout a lot about being a patriot, but at critical moments these statements showed that you were looking for ways to retain power, waiting for the Armed Forces to decide everything for you, and preparing ways to retreat if something goes wrong.

Therefore, both Terekhov and Filatov were morally ready to surrender in case the Ukrainian military didn’t have enough resources and forces to defend Ukrainian land. (Nobody trusted Terekhov for almost a month after that, and by then the Armed Forces had already stabilized the situation around Kharkiv and began counteroffensive actions.) Evidently, many local government officials in Ukraine put themselves before the state, and this is a real problem. They create local patriotism to fit themselves and their electoral success. As a result, the national context and the interests of national security do not concern them much, as they believe it should be decided by the abstract “Kyiv” and not by them.

Of course, not all officials are the same. There is Vyacheslav Zadorenko from Derhachi, for example, who stands out among all mayors in the Kharkiv region, showing his sincere pro-Ukrainian position while being in a frontline zone and publicly calling on other community heads in the region to make public pro-Ukrainian statements. (Although locals do have a lot of questions for him concerning the first two weeks of the invasion, before the Armed Forces did their job.) There’s also Serhiy Zelensky from Lozova. Viktor Kovalenko from Zolochiv can be added to this list indirectly, as can the village head from Borova, who left the area and is now trying to help his community with humanitarian aid from the Kharkiv region. Nothing has been heard about the positions of the other community leaders, either because their statements did not catch my eye, or because they were too vague.

Water quality studies have shown that tap water in Kharkiv has deviations in iron content, turbidity, and permanganate oxidation. One can see this with a naked eye, because there is much more sediment in the water than before. The springs that are a source of water for many Kharkiv residents are also in poor shape. The springs in Sarzhyn Yar, Nemyshl, and Kitlyarchy Yar (a natural border between Saltivka and Pivnichna Saltivka and until recently a zone of constant shelling) have major water quality issues, in particular due to contamination by pathogenic microorganisms.

Public transport in Kharkiv will remain free for an unknown period of time.

The Kharkiv football club Metalist 1925 is currently training in the Kyiv region, planning to play next season at one of Kyiv’s stadiums. However, this decision is still pending due to various organizational and security issues.

According to the police and the prosecutor’s office, more than 1,500 different sites were damaged on the territory of the Rohan Hromada, among them 16 multi-story residential buildings and 22 single-family homes what were fully or partially destroyed. The Rohan Hromada was on the frontline from the first days of the invasion until March. It continued to be shelled until May.

In the occupied territories of the Kharkiv region, preparations are underway for the celebration of “moscovia day” on 12 June. A program is being prepared. It is not always possible to find enough people for this event, especially in the village of Borova. Here, the occupiers cut down a trident, removed Ukrainian flags, and sometimes demonstratively shot them before removal.

In moscovia, there is permanent unrest in the Belgorod and Bryansk regions. A large fire broke out on the territory of the military unit in Klyntsi.

Today’s Darwin Award goes to two female residents of Kamianets-Podilskiy who reported to the police that they had been beaten by neighbors. The investigation revealed their involvement in supporting the muscovites. Now a criminal case has been opened against them. If all adherents of moscovia in Ukraine could come out in this way, the Ukrainian land would be cleansed!

Let us support the Defense Forces of Ukraine! Let us believe in the Armed Forces! Let us help volunteers, medics, and rescuers! Everything will be, Ukraine!

This site uses Akismet to reduce spam. Learn how your comment data is processed.