Periodic singular strikes on the outskirts of Kharkiv continue. They mainly hit in the vicinity of Pivnichna Saltivka and Selyshche Zhukovskoho. There were few attacks in recent days. But it would be a misconception to conclude that this is it. The muscovites have been using a tactic of “low-intensity shelling” followed by heavy strikes on areas of the city that have not been shelled since April for more than a couple weeks now—which becomes a cold shower for the whole city.

There were several missile strikes after midnight. Three explosions could be heard from everywhere in the city. There is absolutely no official information about those strikes. Authorities may not want to reveal the place of the attack, but their silence and the lack of information somehow does not help create a feeling of peace or inspire faith in the government. Honestly, I do not understand why the city and regional authorities do not focus their speeches on targeted attacks on schools and civil infrastructure. This topic will definitely be discussed abroad. For some reason, Terekhov constantly puts emphasis on residential buildings when speaking to foreigners but doesn’t mention destroyed schools and kindergartens quite as much. This is a basic need for parents with children. Their patriotism may keep them in Kharkiv for another year, but with so many schools damaged, they will eventually leave, because their children have to study remotely here. Why is there so little talk about the damaged hospitals that have been targeted? Is it just to keep the scale of the damages secret from the muscovites? Prior experience shows that they know—they find out quickly enough. Keeping quiet works only in the cases of artillery shelling and partly MLRS, but not for missile strikes, because they sometimes intentionally hit the same spot several times. The story about the bridge across the Dniester estuary is proof of that. 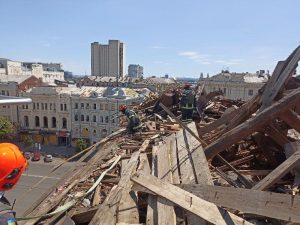 The roof of a damaged building in the center of Kharkiv. Photo: State Emergency Service of Ukraine in the Kharkiv Region. CC BY 4.0

To the north of Kharkiv, fighting and shelling continue in virtually all frontline villages and settlements, such as Ruski Tyshky, Cherkaski Tyshky, Tsyrkuny, Ruska Lozova, Pytomnyk, Tsupivka, Prudyanka, Slatyne, and Derhachi. A rocket artillery strike on Derhachi resulted in fires in four different places, injuring two people. Additionally, the main gas pipeline was damaged, leaving customers in Derhachi, Malaya Danylivka, Karavan, Luzhok, and Tchaikovka without gas. The village of Zolochiv was shelled again. There were also strikes in the Chuhuiv direction: one person was injured on the village of Pechenihy; four people were killed and one injured in Korobochkyne.

Ivan Lysun, a 97-year-old World War II veteran, died in Zolochiv on June 9. His house was destroyed during the 4 May shelling of Zolochiv. He died of heart failure, another indirect victim of the muscovite invasion of Ukraine. In fact, muscovites killed him. The veteran was buried in his hometown on 10 June.

According to the head of the Derhachi Hromada, Vyacheslav Zadorenko, heavy fighting continues for the villages of Tsupivka and Velyki Prokhody.

Nighttime missile strikes are meant to not only cause serious destruction of the targets but also to sow terror. It deprives those who go to bed early of proper sleep and intimidates everyone else. This is one part of the story. The entire city can hear the explosions at night. When the city is silent, they appear even louder. Therefore, acoustic terror should be considered a type of psychological terror. Kharkiv residents have been living with it since 24 February 2022. In dense urban environments sounds are reflected from buildings and distorted. It makes for a horrible environment for people who don’t understand how sound travels. This is exactly what this is about. Acoustic terror is inherent in the muscovite culture in general and the music product in particular. The culture of shouting, force, loud conversations, and breaking personal boundaries is aimed at suppressing individuality, individual needs, and privacy. It’s similar to a group of people being loud outside, loud music coming from cars, or music on public transportation. There are no separate people, there is only a faceless society. The musical product of the muscovites is a collection of notes and voices with little unifying composition. The lyrics have a very light semantic load. There’s almost nothing life affirming about it, unlike Western pop and rock culture. Ruscist music is continuous acoustic terror and psychological pressure. Therefore, the psychological and acoustic terror by rockets is a natural behavior for the muscovites.

Kharkiv is gradually getting used to a life in conditions of danger and nighttime terror. Things are likely to stay this way for a very long time. This requires a degree of psychological endurance and a readiness to come under MLRS or long-range artillery fire at any moment, in any area.

Many places in the Kharkiv suburbs have been littered with mines by the ruscists, including tripwire mines, anti-personnel mines, and even minefields. There are also dangerous areas in Kharkiv itself, on the northern outskirts, including all the forests, as well as Oleksiyivka, Velyka Danylivka, Saltivka, and Pivnychna Saltivka. So far, seven sappers have been wounded while demining and three have been killed.

The Executive Committee of the Kharkiv City Council has decided to publish a register of Kharkiv buildings damaged or destroyed by muscovite shelling on the City Council website. The buildings must be inspected, placed in certain categories, approved, and published. It’s a good idea, but I don’t think a public list with addresses of all the buildings is a good idea because it may help the muscovites finish destroying targets they hadn’t already destroyed. This primarily applies to schools, kindergartens, hospitals, social infrastructure, office buildings, as well as landmarks, and monuments. Muscovites use a tactic of targeting objects they have not finished in the past. We have recorded this many times in the examples of schools and hospitals. It’s good to have such a register, and it’s good for residents of a building to know about its condition and assignment to a certain category. But considering that the threat has not disappeared, whether to make it public or not is an important question. My opinion is that in theory only the part of the register that lists buildings that have been completely destroyed or cannot be restored could be made public.

Power supply to buildings in Pivnichna Saltivka has been restored. In the center, rescuers are dismantling dangerously hanging parts of damaged buildings.

Starting Monday, they plan to start running metro trains more frequently (every 10 minutes) on the Saltivka line between 7 am and 10 am and launch two tram routes connecting southeast Saltivka, canceling one of the buses that have been connecting it.

More and more stories from participants in the events during the first days of the battle for Kharkiv are emerging. It is now clear that the situation in the first week was very complicated and difficult. Kharkiv and Kharkiv residents were walking on the edge of a blade. Commander of the Ivan Sir 92nd Mechanized Brigade, Hero of Ukraine Pavlo Fedosenko, recalls the first ten days (approximately through 5 March) as the most difficult. Those were the days before the Kharkiv defense force organized an echelon defense system and seized the initiative. Things were especially difficult during those first weeks in terms of food security. Eventually, new logistics chains were organized, security improved, and the situation changed for the Kharkiv defense force.

But the difficult period for Kharkiv lasted through mid-March, when the daily flights of muscovite planes over the city and bombing of its various areas ceased. As soon as the muscovites started losing aircraft, these flights were stopped due to their inefficiency and the overall losses of ruscist aircraft in Ukraine. They prioritized other directions.

The most difficult day for Kharkiv was 27 February, when several muscovite sabotage and reconnaissance groups broke into the city, mainly through Oleksiyivka, because there was heavy fighting in other directions (Saltivka, Chuhuivska highway, and Pyatykhatky). There was a heavy battle for Pyatukhatky, near the building of the Physics and Technology Department of the Karazin University. A better defense system was organized, because there were more people, according to Kraken Special Forces Commander Konstyantyn Nemichev. The muscovites were then given old maps, so they just got lost in the city, because there are many new buildings. Also, in my opinion, because the streets had been renamed during decommunization. Then, all day in different parts of Kharkiv these groups of ruscist special forces and Pskov paratroopers were chased down and neutralized by Ukrainian defenders. The last groups barricaded themselves in school number 134 on Shevchenko Street. And because storming of the building was a difficult task, it was fired upon by an RPG and then a tank got involved. A fire broke out and the school burned down together with the occupiers.

Heavy fighting continues in the southeast of the region, in the Slovyansk and Barvinkove directions. All frontline villages are being heavily shelled, from Chepil’ to Barvinkove ​​and the villages around it.

The situation varies in the occupied territories. Thus, the head of the Vovchansk Hromada Anatoliy Stepanets, whose fate had been unknown since the beginning of April, appeared at a meeting dedicated to the formation of the occupiers’ so-called “Provisional Civil Administration of the Kharkiv region,” conducted on 3 June 2022. Another Kharkiv-region mayor has become a collaborator.

In the village of Borova, center of the Borivska Hromada, the occupiers, in addition to a military commandant (a muscovite from Novosibirsk), also appointed a so-called head of the civilian administration. They could not find a decent candidate among the local collaborators, so they appointed Andrei Syemashko from the city of Baranovichi, in the Belarusian Federal District. He previously headed the housing and communal services in Baranovichi and was the deputy chairman of the executive committee of the Brest region of Belarus.

The muscovites are rebuilding railway bridges in the territory of the Borivska Hromada in order to quickly deliver military cargo to Lyman. Medical supplies donated to the Borivshchyna region from Kharkiv as humanitarian aid are already being distributed to the population at the central hospital in Borova.

There was another explosion in the Belgorod region.