Another difficult day for Kharkiv, which saw more shelling of residential districts. In addition to strikes in Saltivka, twice in the morning the muscovites attacked Zhuravlivka, and then twice during the course of the day attacked Oleksiyivka. One person was killed and several were wounded. Rescuers pulled an unharmed man from under the rubble in Zhuravlivka. The first thing he asked was about his dog, which had also been under the rubble. Subsequently the dog was pulled out as well.

Overall, eight people were wounded in the city today besides the one person who was killed. Around 11 pm, a missile flew in from Belhorod during an air raid warning. I don’t know exactly where it landed (somewhere in the Kholodnohirskyi district of the city), but I could hear the explosion loudly from where I live. Additionally, a missile struck a supermarket in the southeastern outskirts of the city. This is a campaign to intimidate Kharkiv residents and destroy any of the city’s infrastructure.

An alarm indicating a threat of an artillery strike lasted from 6 pm until late at night today: the first time it went on this long. Before it would come on after the end of an air raid alarm. This time, it went off independently. Only later did an air raid warning start and eventually end, while the artillery strike warning continued. Only at night, after another air raid warning, did both warnings end. 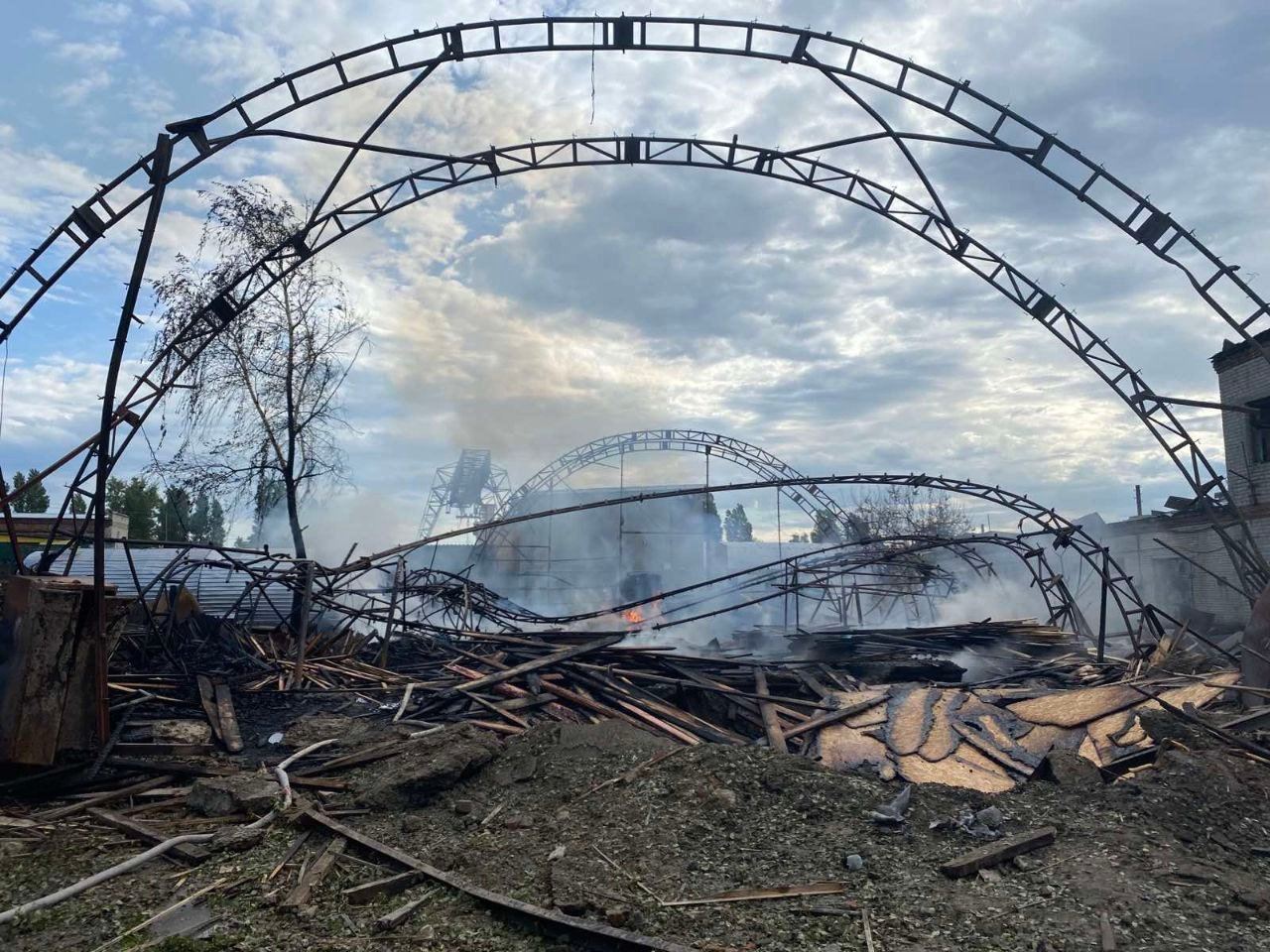 A warehouse destroyed by a muscovite rocket strike. Photo: State Emergency Service of Ukraine in the Kharkiv Region. CC BY 4.0

Muscovite shelling of Kharkiv’s northern suburbs continued: Ruski Tyshky, Cherkaski Tyshky, Tsyrkuny, Ruska Lozova, Cherkaska Lozova (two people were killed as a result of the attack on Cherkaska Lozova), Prudyanka, Slatyne, Derhachi, and settlements of the Zolochivska Hromada. Numerous people were wounded. There were also strikes in the area around Chuhuiv, particularly in the village of Korobochkyne.

Fighting continues to the north of the city. Our troops’ positions are being shelled.

The muscovites’ destruction of civil infrastructure (stores, education and medical establishments, residential districts) together with forced deportation of the population to moscovia—prioritizing children, to increase moscovia’s white slavic population—aim to depopulate Ukraine’s territories where fighting takes place, to rob these territories of a future (if there are no children and youth, there is no future), to turn them into wastelands, inhabited only by the old and the weak. These are all clear signs of genocide. Kharkiv may not be easy to destroy, but the ruscists are implementing their plan in the suburbs to the north and northeast of the city.

Extra! Extra! Supposed sellers of humanitarian-aid supplies were arrested at the central market. They were selling canned food without labels or anything written in Ukrainian, allegedly coming from humanitarian aid. They didn’t have documents and the police opened cases against them. The problem with humanitarian aid being sold does exist you see, but those who are really selling it definitely have some protection.

The Saltivka tram depot is calculating its losses. About 60 cars are completely destroyed and another 60-plus are damaged and cannot run on their own. The 20 or so of the ones that survive cannot come out because of damaged overhead lines and destroyed substations. Likewise, three out of 150 Turkish Karsak 3 buses are fully destroyed and 120 are damaged to various degrees, some of them impossible to repair. A rare 1920s X series tramcar has survived, but the MTV-82 series car has been destroyed completely, impossible to restore. The tram parade at the end of July last year was the last time many Kharkiv residents saw it…

The current estimated cost of restoration of the damaged buildings of the Karazin Kharkiv National University is about 3.5 billion hryvnia ($117.6 million). Buildings of four of the university’s 23 departments are either significantly damaged or totally destroyed. Windows in two of the main buildings were broken by the blast waves from the rocket strikes on the Freedom square and the Kharkiv Regional Administration building. The university’s economics department building was destroyed by a rocket strike. It was an architectural landmark, built in the constructivist style. The concrete structure has survived, so it’s possible to restore the building. The institute of public administration was partially destroyed, as were the physics-technical department and the university’s sports center. There’s damage to the building of the library, which holds old manuscripts and philological literature, as well as the museum of nature and two dormitory buildings.

Electrical grid repairs are ongoing in Kharkiv and the Kharkiv region, including Vilkhivka, the Kharkiv suburb that was liberated two months ago, and Lozova, where electrical transmission lines and houses were damaged by a rocket strike.

Elina Svitolina and Andriy Shevchenko called on the European sports community to support the Metalist 1925 football club (based in the town of Vysokyi, which was partially destroyed by muscovite rocket strikes) and help repair the damaged football infrastructure.

On 6 June an artillery attack started while evacuees from the occupied territories of the northeastern and eastern parts of the Kharkiv region were loading into buses. The muscovites were simply shooting at the area around the dam. Ukrainian troops basically covered the evacuees with their own bodies in the trenches. Overall, the destroyed Pechenizka dam now acts as a portal of sorts between free Ukraine and the occupied territories of the Kharkiv region.

In the southeast of the region fighting is taking place in the Sloviansk and Barvinkove directions. Frontline villages are being shelled.

The situation is difficult in the occupied territories. One resident of occupied Vilcha (Vovchanska Hromada) who managed to escape to Kharkiv told us that residents wouldn’t take anything from the occupiers in the first few weeks, and that the occupiers wouldn’t set up checkpoints in town, only in Vovchansk. Eventually, sometime in the first 10 days of March, these checkpoints appeared in Vilcha too. Out of hunger and lack of money, the residents had no choice but to accept the muscovites’ “humanitarian” aid. People keep disappearing, especially those who used to serve in the Armed Forces of Ukraine or participated in the Anti-terrorist Operation Zone and the Joint Forces Operation.

The muscovites are trying to repair the railroad bridge near Kupyansk. There’s already a passenger train going from Kupyansk itself to moscovia.

Farmers in the Borivska Hromada were told to provide information about sowing of the fields and promised “help” with selling the harvest in moscovia. They’re also being pressured to provide equipment and other resources for restoration of roads and infrastructure in their villages.

Izium gauleiter Vladyslav Sokolov issued an “order” to translate all the administrative processes to the muscovite language. Before we would debate whether to let the elderly fill out documents in muscovite language because it’s more convenient for them. It’s simple in this case: Ukrainian is canceled because it’s not needed. This is the gist of muscovite imperialism.

There was an explosion at an ammunition warehouse in Belhorod. The official version of the local administration is that the incident was caused by the failure to take fire precautions. Looks like somebody threw a cigarette butt in the wrong spot again.

The Darwin Award goes to the deputy general director of VK Habrielyan, who was resting so well in the Nenetskyi region on the shore of the White Sea that his all-terrain vehicle flipped over during an attempted crossing of a river, ending with him drowning. The muscovites are trying to blame Ukrainian all-terrain vehicles for this.

We thank our defenders for giving us another day! Let us believe in the Armed Forces of Ukraine!