The muscovites continue shelling Kharkiv. There were multiple single-strike attacks today, hitting the vicinity of Pivnichna Saltivka, Selyshche Zhukovskoho, and Pyatykhatky. Fortunately, no one was injured.

Meanwhile today the muscovites turned all their attention to Zolochiv. The town had not been shelled so hard in the daytime for all 97 days of the large-scale invasion. One woman was killed and another was injured in the shelling. Other settlements of the Zolochiv Hromada were also shelled, including the villages of Svitlychne (the house of culture there caught on fire and burned to the ground), Odnorobivka, Udy, Karasivka, and Kalynove.

The villages of Prudyanka and Slatyne, Derhachi, Ruska Lozova, Pytomnyk, Ruski Tyshky, Cherkaski Tyshky, and Tsyrkuny were also heavily shelled. Likely due to the fighting for the village of Tsupivka, the village of Nove was made part of the “zone of operational control by the Armed Forces of Ukraine,” as wrote the head of the Derhachi Hromada, Vyacheslav Zadorenko. However, there has been no official announcement by the General Staff or units of the Armed Forces. Shelling of the Chuhuiv district is also underway.

As a result of the shelling on Monday, May 30, five people were injured, including a 13-year-old girl in the village of Korotych, of the Pisochyn Homada, and one person in the village of Buda, of the Pivdennomiska Hromada. In addition, on May 30 two schools were destroyed by shelling, one was in the Chuhuiv district. 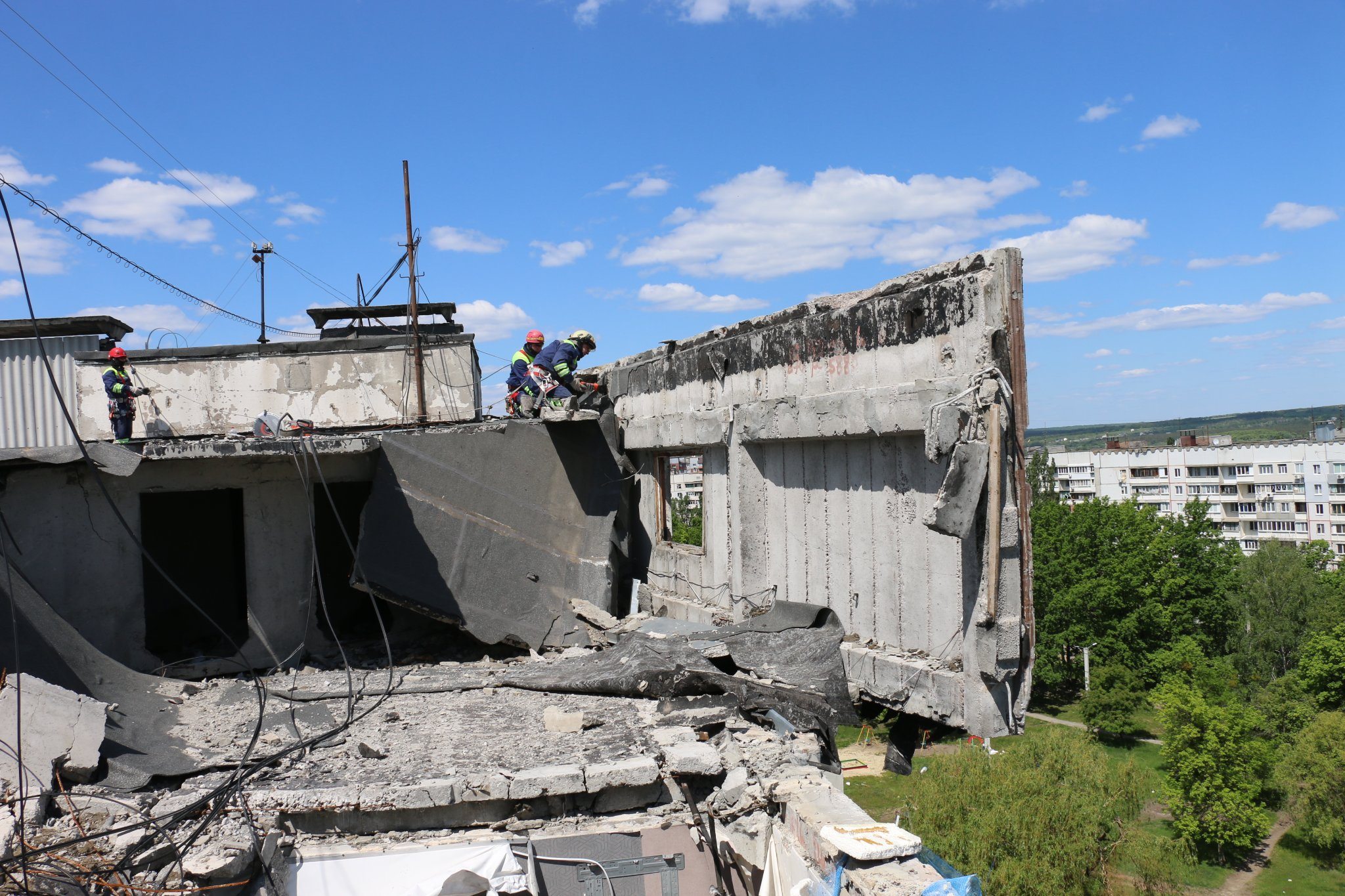 A partially destroyed building in Pivnichna Saltivka. Photo: Main Directorate of the State Emergency Service of Ukraine in the Kharkiv Oblast Region. CC BY 4.0

At the same time, deputy commander of the Carpathian Sich battalion, Maria Chashka, said the muscovites could potentially resume an offensive against Kharkiv, as the overall goal to capture the city has not been removed from the agenda. Based on the information I have, such plans are indeed possible, which means it’s still too early to return to Kharkiv. At this point, several mid-size and large businesses have paused things until the autumn of this year. I estimate a similar timeframe. But it’s all very relative, as we still have to get through these three summer months.

Three new trolleybus routes are set to start operating in Kharkiv from 1 June, but one bus route will be canceled due to being redundant. Despite the fact that the number of public transportation routes in the city is increasing, mid-size and large businesses that aren’t retail chains are in no rush to launch operations and production. Although many people are using public transportation, Kharkiv’s economy is still far from being relaunched, primarily due to the threat of shelling and the unstable security situation.

Mayor Terekhov announced plans to build the Oleksiyivske metro depot underground, because it will be located on the northern outskirts of Kharkiv. To be honest, it would be better to move it to the south of the city (but where?). But it’s the right decision to build critical infrastructure underground in a city that can be shelled from the territory of moscovia. This is the position of our team of documentarians from the point of view of safe functioning of Kharkiv.

Meanwhile, the Kharkiv tram system is being destroyed not only by local authorities but also by looters. Three men stole 90 meters of overhead tram wire in the Kharkiv Tractor Plant neighborhood.

Mayor Terekhov says Kharkiv residents who lost their homes should receive monetary compensation for the lost housing and other property so they can decide for themselves where they want to live. For many people living in Pivnichna Saltivka, for example, this will not be an option. They may want to buy an apartment in another area or another city, or a house in a village.

Rescuers continue clearing the rubble of a partially destroyed 16-storey apartment building in Obriy, struck on February 28, 2022. Bodies of two more men—bringing the total to four—were retrieved from the rubble.

According to the Department of Education and Science of the Kharkiv Regional Administration, about 260,000 children studied in the region’s schools this year, 15,200 of them in 11th grade. We know that about 16,000 children went abroad after the full-scale invasion by moscovia. About 20% of the city’s schoolchildren remain in Kharkiv, while about 90% are participating in online learning. More than 200 schools were damaged in the region, out of 715 total, or about 30%. About 100 schools were destroyed or damaged to an extent that won’t make repairs possible by the start of the next school year. Most of them are in Kharkiv. This is as much as one needs to know about the hypothetical possibility of resuming education in Kharkiv and the need for families with children to return to the city. Education will be remote only and will not resume in all the schools after the war ends with our victory. If you want your child to socialize at a school, there is no point in returning to Kharkiv for at least another year. This is the reality, despite mayor Terekhov’s cavalier statements. Read about the problems with schools and the degree of damage to them in a special report by our team.

Here’s another piece of interesting news. Vil Bakirov, former rector of the V. N. Karazin Kharkiv National University, voluntarily resigned as chairman of the Academic Council. On May 30, Tetiana Kaganovska, the rector of the university and a well known plagiarist, was elected as his replacement. It is unknown at this time what he will do after leaving the position. Perhaps he came to the realization that the university’s prospects are now quite dubious, given the degree of damage to its buildings, property, and the like.

Kharkiv’s ban on alcohol sales (with the exception of low-alcohol-content beverages and beer) has been lifted. You can now buy wine, vodka, and cognac. You can buy these products in a  supermarket or a shop between 9 am and 3 pm, and in a catering establishment between 9 am and 9 pm. In my opinion, this ban only made things worse for the economy and encouraged smuggling “from the field.” However, it was really useful in the times of intense shelling and fighting for the city.

The troops evacuated from Ruski Tyshky a part of the collection of several thousand lizards belonging to Nelli Kuzmenko and Serhiy Prokopyev, participants in international herpetoculture projects that aim to preserve nature’s biodiversity and create a reserve gene pool. Some of the reptiles had been taken to Kyiv right after the liberation of Ruski Tyshky, as Kharkiv does not currently have the appropriate infrastructure to preserve them, and some were moved only now. Since lizards are thermophilic, there was a problem with keeping them warm, because there was no electricity, and there were problems with gas. Some of them died, and some were born in the occupation.

The Security Service of Ukraine detained two members of illegal armed groups from the temporarily occupied territories. One of them is a former police officer from Yenakiieve, who in 2014 joined the ranks of the so-called “DNR police” and later fled to Kharkiv. The other is a resident of Rovenky in the temporarily occupied territories with multiple convictions. He had joined the so-called army corps, where he was a machine gunner, but later also fled to Kharkiv. The Kharkiv Regional Prosecutor’s Office has announced another person suspected of collaborating: a former police officer from Luhansk, Oleh Polezhaev, who not only joined the ranks of illegal armed groups, the so-called “LPR,” but also engaged in torture of civilians in the Kharkiv region in April and May of this year. In particular, he visited the village of Kozacha Lopan and the village of Tsupivka, where in the Tsupivka school he “interrogated,” intimidated, and tortured four local residents.

The Kotelevsky District Court in the Poltava region sentenced muscovite servicemen Alexander Bobykin and Alexander Ivanov, who were the driver and gunner, respectively, of a BM-21 Grad which fired on the civilian infrastructure of Kozacha Lopan and Derhachi on February 24, 2022. After invading the territory of Ukraine, their column was broken, and the two servicemen were taken prisoner. They pleaded guilty and received 11.5 years in prison for violating the laws and customs of war.

Fighting continues in the southeast of the Kharkiv region. Muscovites are trying to attack both the Slovyansk and Barvinkove areas. In this zone, fighters of the 93rd mechanized Kholodnoyarsk brigade shot down the next Ka-52 “Alligator” helicopter.

In the occupied territories, the muscovites continue shelling villages and towns. A 12-year-old child was killed by shelling in the village of Ivanivka of the Izium Hromada. Also on Monday, 30 May, a resident of Chkalovske was killed.

The 127th Territorial Defense Brigade of the Armed Forces of Ukraine is gradually becoming a motorized infantry thanks to the trophy equipment its fighters have been winning back from the ruscists.

Let us believe in the Armed Forces of Ukraine! Let us keep up the spirit! And the victory will be ours!