Today was a quieter day overall. After three days of heavy shelling of the city by muscovite troops, the intensity dropped. This does not mean it ceased; still, less shelling means less damage and casualties, allowing one to breathe a little.

It was busy in the night time; there was shelling by the muscovites and our military responded appropriately. In the morning, the shelling was also relatively intense but undulating. However, in the middle of the day, shelling almost stopped in all parts of the city. The muscovites started shelling the city again only late in the evening. Generally, they fired upon Saltivka (mostly Pivnichna Saltivka), Velyka Danylivka, Kulynychi, Selyshche Zhukovskoho, Pyatykhatky, Oleksiyivka, the Kharkiv Tractor Plant neighborhood, and Kholodna Hora. 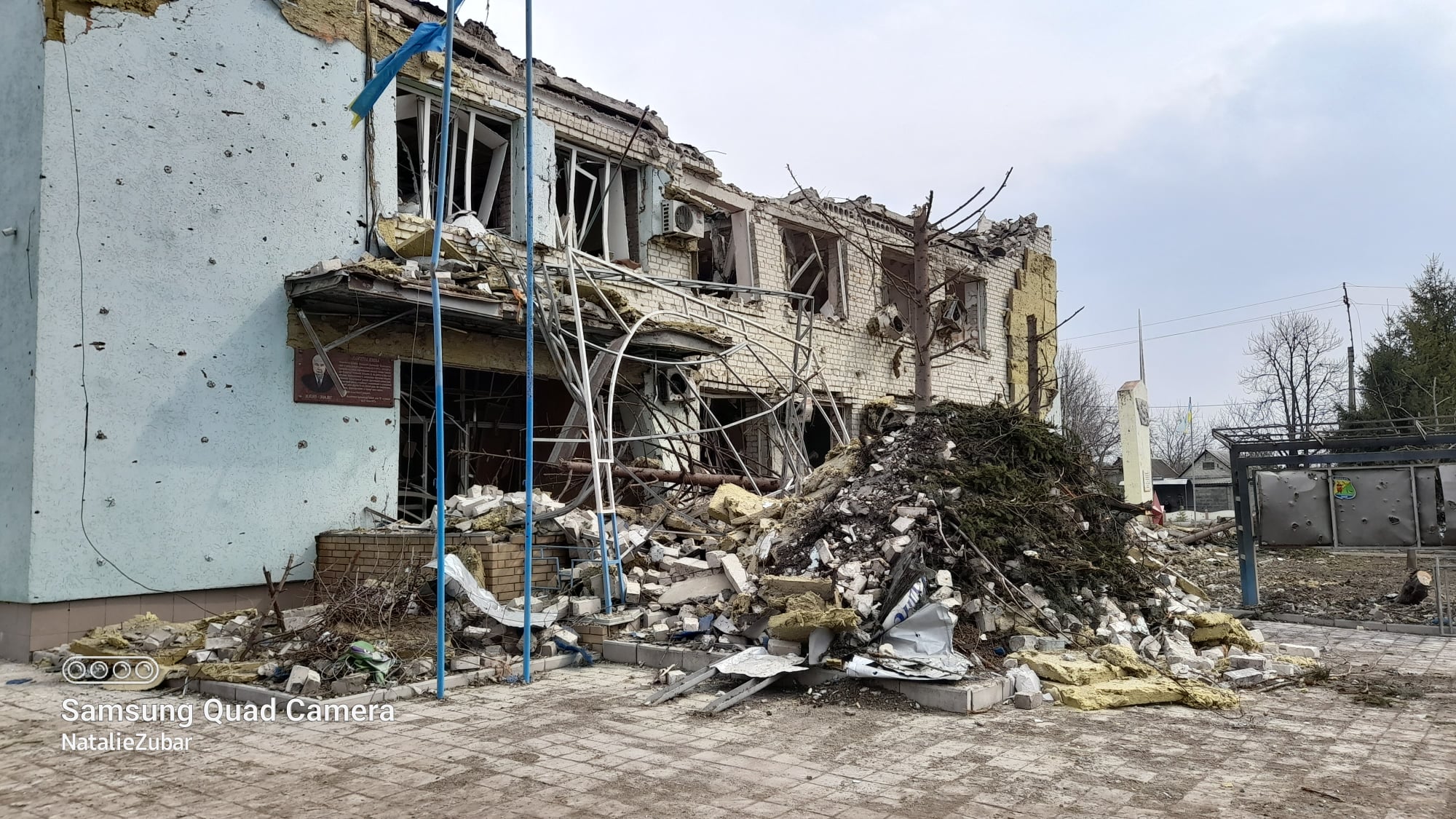 The relative silence in Kharkiv doesn’t mean it was quiet elsewhere in the region. Today, the ruscists heavily shelled Derhachi and villages of the Derhachi Hromadam, incuding Slatyne, where two people died, bringing a two-day total to five casualties. Zolochiv withstood its heaviest shelling to date. Cluster munitions damaged and destroyed residential buildings and were fired on the hospital. A total of four people were injured in Zolochiv. Pisochyn also came under muscovite fire, shell fragments killing two people and leaving a few wounded; residential buildings were damaged as well.

Also, the use of delayed-detonation mines—which are prohibited by international law—has been documented near Kharkiv.

The first leaves have started appearing on some of the trees in Kharkiv. Spring is here. Today was warm. Shops are stocked, but there isn’t a wide selection of household goods everywhere. Clearly, this is only true for areas that aren’t subject to intense shelling. This isn’t true for the likes of Pivnichna Saltivka, parts of Saltivka’s numbered district, and Obriy.

Citizens in the areas of the city that are being shelled have organized themselves. They’ve organized delivery of humanitarian aid; some are great coordinators who have established survival protocols in shelters. These citizens and their experience in extreme conditions will be very useful after our victory, in reconstructing Ukrainian cities and villages that were destroyed.

According to the prosecutor’s office in the village of Vilkhivka, near Kharkiv, where many poor people lived, the vast majority of buildings, including small shops, were damaged or destroyed; the school was badly damaged. The “ruSSian world” flattened Vilkhivka like a steam roller…

In Kharkiv, according to Mayor Terekhov, 1,617 residential buildings were damaged. The total number of damaged buildings is already close to 2,000.

What the head of the Kharkiv Regional State Administration, Oleh Synehubov, is saying, that Kharkiv is well protected and that no evacuation from the city is being planned, is true. Even the troops themselves here are waiting to crush a few muscovites. But the city will continue to be shelled, we don’t know to what extent but probably with high intencity. Nobody here knows whether they will march on Kharkiv or not. The decision to leave the city is up to each individual. If you have weak nerves, are overstressed, have battle fatigue, etc.—you should leave. You are unlikely to be helpful and, after all, everyone has to make their own decision and is responsible for their own actions. By the way, the evacuation of the population from Barvinkove ​​and Lozova is underway.

The management of the Feldman Ecopark (zoo) filed a complaint with the police regarding the theft of UAH 50,000 worth of food (carrots, beets, and cabbage) by ruscists. Police said they will investigate the crime.

Elsewhere in the region, fighting continues in the Izium area and in the Barvinkove direction, but the muscovites haven’t been advancing. Meanwhile, Ukrainian artillery fire destroyed a ruscist ammunition depot thanks to the border guards’ air reconnaissance. Also, there are rumors that our military has shrunk muscovite columns (the official information is about one such column, headed for Izium). In the Kharkiv region, two ruscist drones have been destroyed with the help of British Starstreak MANPADS. The Kharkiv region today is on fire—literally and in the truest sense of the word!

Attempts by the muscovites to break through the defenses on the northern flank of the Joint Forces Operations zone (Rubizhne, Sievierodonetsk, Popasna) were unsuccessful. Our military is holding the defense. But these cities, together with Lysychansk, are under heavy fire.

Similarly, on the southern flank of the Joint Forces Operation zone, the attempts to enter Vuhledar and Velyka Novosilka were thwarted. Fighting continues in Mariupol. There, a wounded border guard blew himself up along with the radio station. His last words on air were, “Glory to Ukraine!” Thank you to the hero for fighting to his last breath! Eternal memory to him!

“Glory to Ukraine” (“Slava Ukraini”) is our slogan. It is a greeting, a battle cry, and a farewell to one’s brothers. Not many countries have such a slogan. The connotation is that whoever is saying it is on your side. We are gradually teaching the world both this slogan and respect for us. It is more than just a slogan to us; it is an expression of our attitude toward ourselves and our country!

The ruscists continue to launch powerful missile strikes on the Dnipropetrovsk region, Dnipro, and Mykolayiv. Six rescuers were injured during a repeated shelling of the Dnipro airport, with Yevhenia Dudka, head of communications with the State of Emergency Services of Ukraine, suffering the heaviest injuries.

People have been disappearing, tortured, and killed in the occupied territories. In Kherson, they say, the local jail was turned into a torture chamber. The Ukrainian writer, volunteer, and Ukrainian Wikipedia contributor Volodymyr Vakulenko and his son, who suffers from autism, were abducted from the village of Kapytolivka, near Izium, and detained by muscovites in late March. Their fate is unknown. This is the first known case of a Ukrainian Wikipedia contributor disappearing in the temporarily occupied territory.

The muscovites are handing out ruscist passports to forcibly deported citizens of Ukraine. According to ombudsperson Liudmyla Denysova, more than 10,000 passport books with a two-headed chicken (translator: reference to the two-headed eagle on the Russian coat of arms) have already been distributed.

An attempt to hold a rally in Kherson in memory of the victims of the ruscist invasion ended in a dispersal with automatic weapons. Fortunately, there were no casualties. In Hola Prystan, in the Kherson region, which is also occupied, a football tournament under Ukrainian flags took place.

Again, there was unrest in the Kursk region of moscovia. Starting tomorrow, the terrorist threat level there is yellow. Are they looking for a Ukrainian sabotage and reconnaissance group?

Now, some funny facts. The muscovite Orlan-10 UAV, which was captured by our military after landing, seems to be the latest Skolkovo nanotechnology development. It has a conventional Canon camera and a plastic bottle neck with a lid on a rope for refueling. Fucking nano-kulibins! (Translator: Kulibin is a Russian mechanic and inventor.)

Let us believe in the Armed Forces of Ukraine and help volunteers, doctors, rescuers, and public utility workers. Keep a warm heart and a level head. We know that everything will be, Ukraine!