Kharkiv is being shelled one shot at a time today. Different areas of the city get targeted. Suburban areas to the north of the city get hit the most. However, the situation is difficult in the southeast of the region, where fighting is ongoing.

The shelling of the city has decreased a lot. But it has not stopped; it’s been irregular, and it’s really difficult to predict when and where something will be struck. Today the muscovites continued to fire on Pivnichna Saltivka and nearby areas of the Saltivka district. The shelling went through Gorky Park and the Dynamo Stadium, which once housed both the Ukrainian Premier League and Ukraine Cup matches. The shells even fell on the running track and the soccer field itself. Two people were injured in the shelling of Gorky Park. Artillery struck in the vicinity of the Obriy-Kharkiv Tractor Plant neighborhood.

In the northern suburbs, shelling of the villages of Prudyanka and Slatyne, as well as Derhachi, continues. As a result of the shelling, a high-pressure gas pipeline was damaged; the smoke was visible from half of Kharkiv’s territory. Now, the Derhachi and Malodanilivska hromadas are left without gas indefinitely, because it’s unknown when repairs can be made.

Additionally, in the area of Dokuchaevsky, Rohan Hromada, the administrative building of a Philip Morris tobacco factory was destroyed as a result of the shelling at night. One employee was killed. 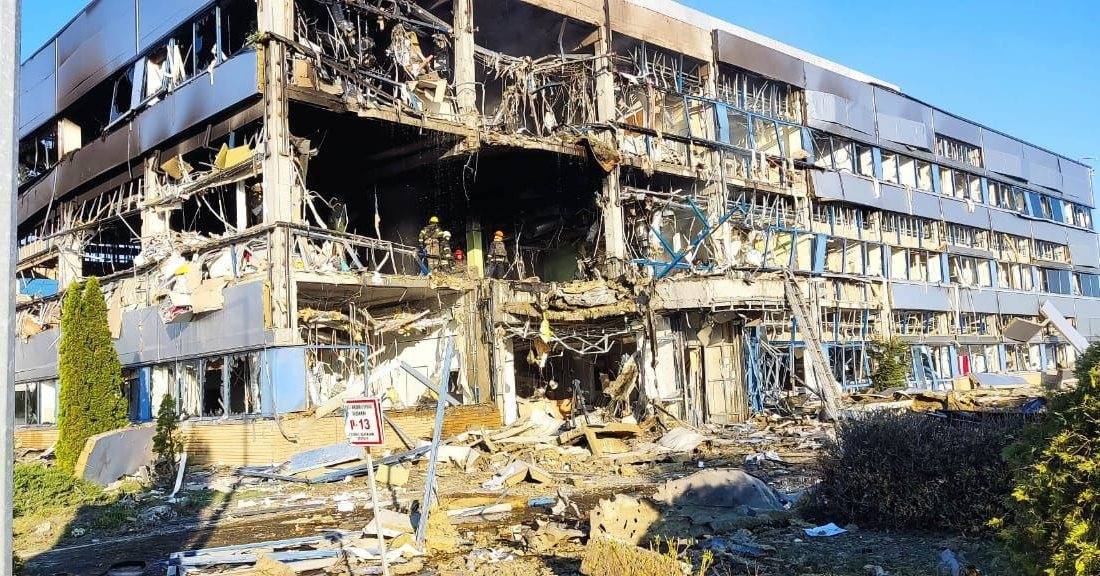 The Philip Morris factory near Kharkiv burned down. Photo: Main Directorate of the State Emergency Service of Ukraine in the Kharkiv Region, CC BY 4.0

Anton Gerashchenko, adviser to the Minister of Internal Affairs, announced liberation of the village of Molodova in Starosaltivska Hromada, showing a video of the Ukrainian flag being hoisted. This information has not been officially confirmed, and there is a difference between raising a flag and consolidating positions. However, the village of Staryi Saltiv is still occupied.

The shelling of Gorky Park has had a healing effect on the “vatnik” (translator: a pejorative for “Russian”) population in terms of understanding who is shelling Kharkiv. There’s one simple reason for that: it was one of Kernes’s greatest projects, and for his supporters his projects have a certain “halo of holiness.”

The more the muscovites strike  Gorky Park and Sarzhyn Yar, the fewer vatniks there will be among Kharkivites and Kharkiv residents in exile.

Kharkiv continues on living and defending itself. City officials are already urging businesses to prepare plans to resume their work. However, in my opinion, the city is unable to fully restore life, including relaunching public transportation, until the issue of Tsyrkuny and Ruski and Cherkasi Tyshky is resolved and until the muscovites are pushed to Goptivka on the route to Belhorod. Then you can think about a limited launch of public transportation in Kharkiv. But in order to get to this point we still need to survive and also undertake a counteroffensive.

But for a full return to life, Kharkiv needs not just air defense, but protection of an “Iron Dome” type defense system against short-range missiles. Otherwise, the shelling will not stop for a long time, possibly until the end of the war. How long the war will last is a separate issue. It will last at least until the end of the year for sure. I do not have any good news there. Moreover, even the expulsion of muscovites beyond the Ukraine border would not remove the threat. They can easily shoot at Kharkiv every day, because the city center is only 40 km from the border, and the outskirts of the city are just 25 to 30 km from the border. The muscovites have a bunch of rocket munitions that reach at 40 km, 70 km, 120 km.

They also have the 152 mm caliber  Koalitsiya-SV, which shoots at 80 km. This means that all of Kharkiv and the entire territory of the region, except for southern territories, are within reach of such installations. Moreover, they have stocks of such missiles that can last many years, perhaps 10 or even 20. We have to learn to live with it. We  have to learn to always have an understanding of how to act in an emergency situation; where the nearest bomb shelter is; and how to stop bleeding according to the protocols of tactical medicine.

By the way, the “threat of artillery fire” option has been added to the “Tryvoha!” (“Warning!”) application and appears to be very useful.

The option went off in Kharkiv yesterday during one of the alarms. The air raid sirens in Kharkiv are no longer being responded to, but it is recommended to go to the shelter in case of the threat of artillery shelling.

In Zmiyivska, Chuhuivska, Malynivska, Novopokrovska, Pechenizka, Slobozhanska, and Chkalovska hromadas, citizens 18 to 60 years of age who aren’t already reserved by businesses, institutions, and organizations have been ordered to work on building defense borders and positions to prepare for defending the Malynivsky bridgehead.

Settlements of the Donetsk Hromada were shelled. One local resident was killed.

In May, the Kharkiv Regional Council will hold its first online session since the beginning of the large-scale invasion. The session was supposed to take place on February 24, but with the aggression beginning that day, it did not take place. I note that the building of the Kharkiv Regional Council was destroyed by a missile strike on March 1 this year.

Fighting continues in the Slovyansk and Barvinkove areas. The situation is difficult but under control. Barvinkove’s shelling continues.

Volodymyr Volkov, head of the Volokhovo-Yarsky Starostynsky District of the Balakliya Hromada, cooperated with the occupiers and provided information about patriots and anti-terrorist operation participants, as well as helping muscovites with resources to locate them and create defensive lines. Another resident of this village, Svitlana Litvinova, is also a collaborator. In addition to creating the lists of patriots and members of the anti-terrorist operation, she also campaigns among the local population for cooperation with the ruscists, encouraging people through distribution of humanitarian aid, and so on.

Marmots from the Biostation of the VN Karazin Kharkiv National University are now in the occupied territory in the village Nesterivka of the Velykoburlutsky Hromada, including the weather forecaster Tymko III. They are being cared for, but there are a bunch of homeless dogs gathered in packs, and it is becoming increasingly difficult to keep them from the marmots.

There are also battles across the Joint Forces Operation zone, in the area of ​​Lyman, Yampil township. Our military does not allow access to the Seversky Donets River, preventing building river crossings. Fighting continues for Rubizhne and Popasna, near Sievierodonetsk, in Verkhnotoretsky, Avdiivka, Maryinka, Velyka Novosilka, and Huliaipole.

Heavy shelling of the Donetsk and Luhansk regions continues. There are dead, wounded, and destroyed buildings and infrastructure. The Avdiivka coke chemical plant was shelled, killing 10 people and injuring 15. As a result of the shelling of Vuhledar, three people were killed The large elevator in the Rubizhne and Lysychansk tuberculosis sanatorium were destroyed, and in occupied districts of Popasna, occupiers looted the remaining property that survived.

In Mariupol, muscovites again launched massive attacks on Azovstal. At the same time, the occupiers in the city, in addition to their population “filtration” measures, carried out the “nationalization” of all property. Private properties like apartments were declared as belonging to no-one and thus were free to be occupied and further “legalized” according to so-called “laws” of the temporarily occupied territories.

Today there were heavy missile strikes on the railway infrastructure in Lviv and the Lviv region, Transcarpathia, Kirovohrad region, Dnipropetrovsk region, and Odessa region. The muscovites are well aware that a strike on the echelon with military equipment itself is tantamount to attacking NATO countries, so they are hitting the infrastructure to significantly delay the movement of the echelons with military aid from NATO and other partners and allies in the anti-Putin coalition.

They have many different types of missiles, and they can carry out massive missile strikes on Ukraine and our infrastructure for many days, even for years. We must learn how to quickly use shit and sticks to restore it. Some will say that this is impossible, but Kharkiv public works prove that this is not so and anything is possible. Our survival and our existence as a nation depend on such skills.

A terrible accident happened in the Rivne region, where a bus going from Kharkiv to Poland collided with a fuel truck and killed 26 people and injured 12 others. Until the experts find out the reason for this I will refrain from commenting.

Planes are flying over Belhorod again, and some explosions could be heard night and day. In the suburbs of moscovia, the bookstore of the Prosveshenie publishing house, the main muscovite producer of textbooks and manuals for moscovia schools, burned down. And in Krnasnoyarsk the landfill with plastic waste caught fire.

Today’s Darwin Award goes to two muscovite fighters. During an interrogation, one said that “Ukraine has been bombing the Dombas for eight years.” To the question of “How many missiles have been fired at Luhansk in recent years,” another muscovite answered that he was from Luhansk, and that  there were none. Drop the curtain.

Let us believe in the Armed Forces of Ukraine, the National Security Service, and Territorial Defense! Everything will be, Ukraine!