There aren’t too many attacks today, but they have been happening, hitting different parts of the city one at a time. The situation in the northern suburbs is difficult because of the constant shelling by the muscovites. There is a lot of destruction and fires. A column of volunteers came under fire during the evacuation from Ruska Lozova. The situation in the Izium district of the region, where heavy fighting continues, remains difficult.

The sounds of the cannonade in Kharkiv are getting increasingly distant, because  our military has been liberating territories around the city from the muscovites. The ruscists are still shelling Kharkiv, albeit occasionally. Pivnichna Saltivka is getting hit. Other areas of Saltivka, Pyatykhatky, Obriy, and the Kharkiv Tractor Plant neighborhood also get shelled from time to time. Last night they hit Sarzhyn Yar, houses in the nearby residential district, and Pavlove Pole, where several cars burned down. 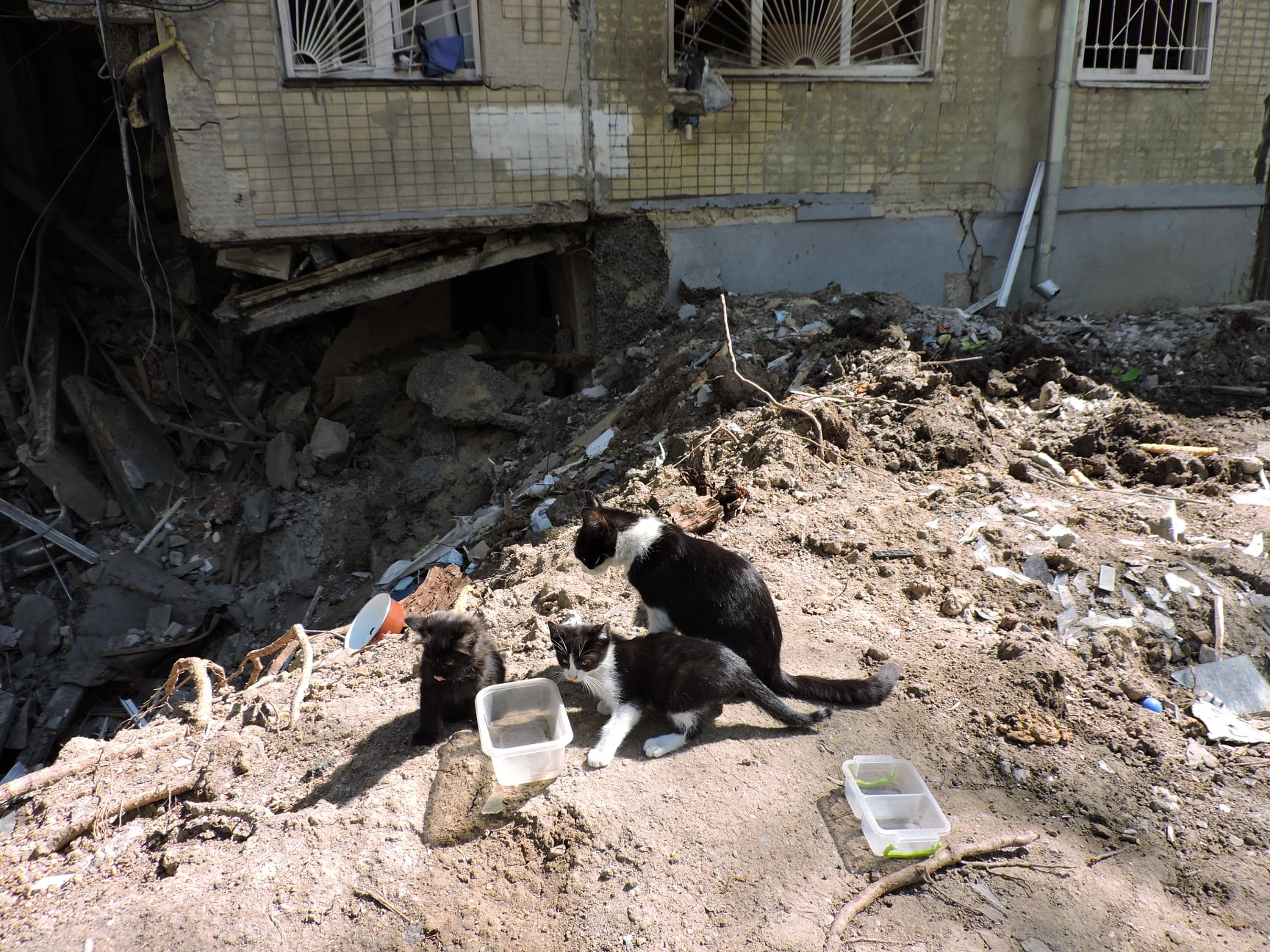 A family of cats on the ruins of an apartment building in Kharkiv (April 2022). Photo: Serhiy Petrov, CC BY-SA 4.0

Out in the suburbs, the Derhachi Hromada and the Malodanylivska Hromada continue to be heavily shelled. The villages of Slatyne, Prudyanka, and Bezruky came under the most intense muscovite shelling. Derhachi and Mala Danylivka also got a lot of hits. About 200 residents still remain in Slatyne. Ruska Lozova is being heavily shelled from a location north of the city. Evacuation of the population there continues, being conducted by volunteers. Today, a convoy of cars was fired upon by the muscovites. One car was destroyed, but fortunately no one was injured. In total, more than 900 people have been removed since the beginning of the evacuation effort.

Today turned out to be a quite warm and sunny day, so more people were out in the city center in the daytime. The curfew was shortened by one hour today, now lasting from 9 pm to 6 am.

The most epic thing I’ve seen in recent days was a working confectionery kiosk, located just a few kiosks away from another kiosk that was hit by a projectile a few days before. There is no electricity in the shop, only batteries, but people are working. On one hand, it looks surreal, but on the other, it demonstrates an inviolable spirit.

One type of buildings we haven’t been able to access to document their destruction are higher education institutions. Nearly all windows were shattered in the Kharkiv National Kotlyarevsky University of Arts by the blast wave from an airstrike on a building near the city council. Many musical instruments (pianos, harps, timpani, etc.) were destroyed as a result of extended exposure to cold temperatures, as low as -18C, and cannot be repaired. A single grand piano costs 6.5 million hryvnias nowadays, and there were more than five such pianos at the university. The university’s losses are enormous.

Kharkiv cats are another topic. In the absence of large amounts of people and car traffic, these creatures have become the real owners of the city. And they now casually stroll their estates. I’ve heard from acquaintances that in one of the basement shelters, domestic cats who live there from time to time express dissatisfaction when people try to make room for themselves. In another place, where a shell flew directly under the foundation of a five story building, blowing out the walls of the bottom floors, a cat now lives in the ruins with a litter of kittens. The family of cats came out of a broken apartment just as I stood there documenting. It’s a sharp contrast against such a background.

Cats are not afraid of shelling or anything else. It seems that they are not afraid of a nuclear explosion, which, again, based on observations of these four-legged creatures, they will also survive. People take care of cats in all parts of the city, even the parts that are under fire. However, there are almost no dogs. They have completely disappeared somewhere.

Today, following a police investigation, six ruscist corpses were finally removed (after two months) from an area to the east of the city.

One of them, as I understand, became a symbol of the muscovites’ attempts to reach Kharkiv by burning on Czech hedgehogs near the city. This was similar to the burned column of muscovite equipment ine Pyatykhatky during the first days of the attack on Kharkiv.

In the eastern part of the Kharkiv Tractor Plant neighborhood, public utility workers are repairing water mains.The city has already begun restoration work on destroyed and damaged heating stations in quiet areas of the city. At the same time, flower planting continues in the center. And in Saltivka, an event with trained dogs and dog trainers was organized for children and adults. Even events like this provide some consolation for people, a kind of normalcy, something that brings back the memories of a peaceful and quiet life.

In the evening, an American journalist, citing a senior Pentagon official, said that during a counteroffensive by the Ukrainian Armed Forces, muscovites were driven 25 miles (40 km) east of Kharkiv. We are waiting for official information.

Also today the work to build two temporary bridge crossings between Chuhuiv and Pechenihy was completed.

The situation is stable in the Slovyansk and Izium areas, and our military is holding back the muscovites. Barvinkove is shelled every day. Two people were injured in another shelling, while residential buildings and two administrative buildings were damaged.

In the Borova Hromada, looting by the occupiers is flourishing, people are being evicted from their homes, and vehicles are being shot at. They use Ukrainian products as props to shoot videos about supposed distribution of their own humanitarian aid.

Things remain difficult in the Joint Forces Operation zone. Fighting continues near Lyman, and the city is regularly shelled. The battles for Rubizhne and Popasna, near Sievierodonetsk, continue. These cities are also under fire. In Lysychansk, the building of the Lysychansk Multidisciplinary Gymnasium, one of the 100 top schools in Ukraine, burned down as a result of the shelling. This building was a monument of history and architecture, built by Belgians in 1895.

Heavy fighting continues in the occupied areas of Novobakhmutivka, Avdiivka, Maryinka, and Velyka Novosilka in the Donetsk region, as well as Huliaipole in the Zaporizhzhya region. Orikhiv, located near the frontline, has been shelled daily by muscovites for several days. There are destroyed buildings, dead, and wounded.

In Mariupol, after today’s evacuation, the ruscists started firing at and bombing Azovstal again. Meanwhile, they take the bodies of Mariupol residents out in the same trucks they use to bring in humanitarian aid. The bodies of muscovite troops are taken to moscovia in small batches late at night, to avoid traumatizing their own people with the scale of the losses.

The muscovites hit a dormitory in Odessa. As a result, a 15-year-old boy was killed and a 17-year-old girl was hospitalized. The all-male monastery of the Russian Orthodox Church in Ukraine was damaged as well. The ruscists shoot missiles at Zaporizhzhya and Dnipropetrovsk regions, destroying grain elevators, grain warehouses, and farms. Their goal is to cause hunger, so that we would not have the strength and ability to fight. It would make people dissatisfied and force us to negotiate on their terms.

Unfortunately, it is necessary to be prepared for the war to last a long time. We need to be prepared for food prices to be high. There will be a shortage of food in the world, because territories that supplied many products to world markets are either occupied or have become war theaters. This is one of the reasons why the world supports us and wants to end the war with our victory as soon as possible. Without our agricultural products, many countries around the world would have difficult times. And moscovia understands it. They want to not only occupy Ukraine and eliminate Ukrainians, but also to call the shots on the oil and food markets. But they will not succeed.

In Odessa, a group of henchmen of (People’s Deputy of Ukraine Illia) Kyva were arrested in Odessa. They were planning to instigate unrest in the city. Weapons, red flags, and many more interesting things were found during the arrest. Today marks the eighth anniversary of the Odessa tragedy, when muscovites set their own supporters on fire inside a trade union building. In the end, thanks to the fans of Chornomorets and Kharkiv’s Metalist, as well as caring residents of Odessa, “ruSSian world” was buried in Odessa.

Funny stuff. A cleaning lady will now manage the registry office in Berdyansk. In the end, they have a pedophile for a mayor-collaborator and a janitor for a deputy mayor. This nicely illustrates the quality of the staff who have agreed to collaborate.

In the Kherson region, the internet is connected to muscovite networks. This means that it’s now dangerous to use the internet, especially messengers, without a VPN, because the entire flow of information in moscovia is monitored and passed through special systems controlled by the FSB. They have the ability to track comments on social networks.

Things are restless in moscovia. First, a fire broke out at a gunpowder factory in Perm, where shells for rocket artillery (Grad, Smerch, Uragan) and air defense systems are produced. They say there were around three casualties—not bad. By the way, a similar “bang” happened at this plant last year. In moscovia itself, someone threw a Molotov cocktail at a paddy wagon.

The regions of moscovia bordering Ukraine are also restless. Some explosions followed by smoke happened in the area of ​​Prokhorivka, Belhorod region, and over Belhorod. At night, planes fly over the city, throwing out decoy flares. Planes fly near Bryansk as well.

There was a fire in a shopping center in the village of Tavrovo, near Belhorod. What’s going on with the safety measures over there? The locals are scared. They understand everything: they understand it but still support the war whose goal is to destroy Ukraine and Ukrainians. They just thought the war would not spill over to their territory. But when the war does spill over to their territory, they understand perfectly well that everything they, the ruscists, brought to Ukrainian soil will come back to them. And here’s the interesting thing: in the end, their belief that the “second greatest army in the world” will protect them from all their enemies may be shaken. Not now, but it will eventually. There is a time for everything.

Funny stuff number two. In occupied Foros, local authorities painted the benches red and black. The locals got a little upset over this, as those are the colors of the Ukrainian Insurgent Army and the Right Sector. The only thing missing are business cards of Yarosh and Stepan Andriyovych.

The Darwin Award goes to Colonel Ovcharenko of moscovia, who now has two graves, one in moscovia and another somewhere near Izium. He was hit by our artillery strike and his body was torn to pieces. The remains were collected and sent to moscovia. Later they found a separated leg and buried it in a grave in Ukraine. This reminds me of the kids’ song about a little horsey: “My mom bought me a little horsey, but it was missing a leg. What a wonderful toy…”