Today was a fairly quiet day in Kharkiv. The muscovites have been pushed back from the east and north, which had the effect of a significant reduction in the amount of shelling. The only area stilll under heavy shelling is Saltivka, because the ruscists control Tsyrkuny, Ruski Tyshky, and Cherkassky Tyshky. There was also still a lot of shelling in the northern suburbs of Kharkiv. The situation remains difficult in the Izium district of the Kharkiv region.

This was the second day in a row when a very small amount of muscovite attacks were recorded in Kharkiv.

Pivnichna Saltivka and other parts of Saltivka continue to be shelled systematically. Because of that, the regional authorities asked residents of Saltivka and other northern districts of the city to stay in shelters all day. Shelling was very rare in other northern parts of the city, like Selyshche Zhukovskoho and Pyatykhatky. No shelling has been recorded in other districts of Kharkiv. There are two reasons for this: first, the ruscists have been pushed back to a greater distance from the north and east of the city, which took away their ability to use cheaper and more massive artillery, leaving only the option of rocket artillery; second, our troops are keeping them busy, leaving a lot less time to bombard the city. 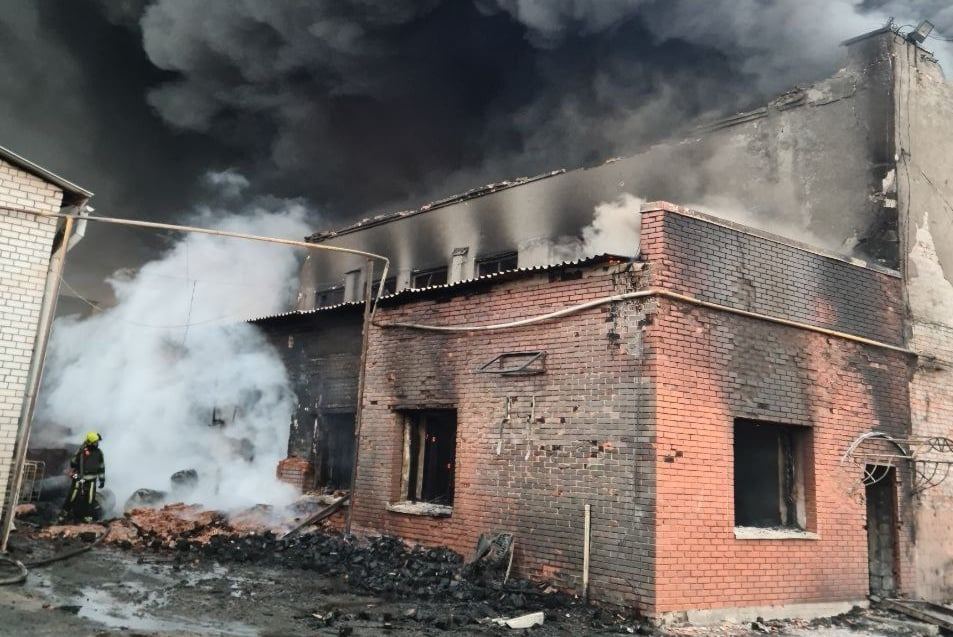 Main Directorate of the State Emergency Service of Ukraine in the Kharkiv Region, CC BY 4.0

In the suburbs, the muscovites hit the towns of Prudyanka, Slatyne, Derhachi, and Mala Danylivka; they’re shelling the already badly damaged Ruska Lozova. We know about at least one victim in the Derhachi Hromada.

Likewise, the muscovites continue shelling settlements of the Zolochiv Hromada: Zolochiv itself, as well as the villages of Udy, Baranivka, and Odnarobivka. In the evening there was a shelling of Zolochiv. One person was killed as a result of a direct hit to their home. A total of four houses were destroyed and six were damaged. The local church was damaged as well. In Udy, the muscovites once again shelled the local school, a 112-year-old building that survived World War II. The two hits to the school ignited a fire. The school cafeteria was destroyed and residential buildings were damaged. In Baranivka, shells hit an agricultural business and destroyed it. In Odnarobivka, one person was injured in a shelling of an agricultural establishment. The same day, the ruscists fired upon the territory of the Bohodukhiv Hromada and hit a car with local residents, killing one person and injuring two others.

According to the General Staff, muscovites suffered losses in the ​​Staryi Saltiv area. What exactly happened is unknown; perhaps an explosion, or maybe something else. The ruscists are spreading the most incredible rumors, but we are waiting for official information.

It’s spring in Kharkiv, although the weather is still cool. I caught myself thinking that during these two months I hardly photographed anything normal, only damage and destruction. Maybe it’s still necessary to take photos of normalcy, for the archive.

Not only can I not get to my parents’ grave for the Week of Remembrance (translator: the second week after Easter in the Orthodox tradition), I don’t know if it’s still intact. They are buried in cemetery 17, located in a zone of fighting and constant shelling. It’s a sad reality.

The situation elsewhere in the region remains difficult. The muscovite offensive in the Slovyansk and Barvinkove directions continues, but without much success. The ruscists fire upon Barvinkove daily. The city center has been destroyed; the library was damaged after a fire broke out a few days ago. It’s very sad and unfortunate when local libraries burn. They contain valuable documents that aren’t necessarily available in regional libraries.

The situation in the temporarily occupied territories of the Kharkiv region is just as gloomy. All medical establishments in Balakliya are filled with wounded occupiers. In Vovchansk, even patients of the tuberculosis hospital were kicked out to make room for wounded muscovites. Doctors who agreed to treat muscovites were kept in place to continue working, while those who did not were sent to the ruscist frontline units.

According to my sources, muscovites rounded up locals at the community club in Buhaivka, of the Vovchansk Hromada, and looted their houses. Also, at least two people with pro-Ukrainian views went missing in the village. They were either taken away during an inspection, were on lists the muscovites had, or were told on by someone. I don’t know for sure. These people have not been seen since and their fate is unknown.

In the Kharkiv region, the Security Service of Ukraine detained a Ukrainian and a muscovite who had gone to moscovia just before the all-out invasion for alleged business purposes. During the search, a small arsenal of weapons was found, including submachine guns, ammunition, grenades, and so on. Spotters and artillery observers are caught in the region daily; it’s become a “routine” of sorts.

The situation in the Joint Forces Operation zone is difficult, but relatively under control. The muscovites are attacking Lyman from two sides: Rubtsi and Zarichnе. It looks like the battle for Lyman may be about to begin, as well as in the village of Yampil. In addition to Lyman, the town of Drobysheve and the village of Oleksandrivka also came under muscovite fire. There are dead and wounded.

Fighting continues for Rubizhne, in the Sievierodonetsk area; in the area of ​​Popasna, Avdiivka, Maryinka, and Velyka Novosilka in the Donetsk region; and in the Huliaipole direction in the Zaporizhzhya region. (Another muscovite attempt to go around Velyka Novosilka has failed.)

In Mariupol, after long negotiations with the UN and the Red Cross, the evacuation of civilians hiding at Azovstal has begun. About 100 people have been evacuated so far, and the evacuation is due to continue on Monday. This is great news, inspiring hope that the Mariupol horrors from the dungeons of Azovstal will end.

In the temporarily occupied territories of Kherson and Zaporizhzhya, the muscovites have cut off internet access and telecommunications. According to Ukrainian authorities, this was caused by damage to fiber optic infrastructure, which is currently being repaired. Apparently, the muscovites want to switch these lines to connect with the Crimean and muscovite network and completely sever them from the Ukrainian one.

In the Kherson region, the occupiers tortured and killed Nazar Kahalnyak, a member of the Anti-Terrorist Operation who had been abducted. Last week, the body of a doctor who had served in ATO was found in Husarivka, of the Balakliya Hromada, in the Kharkiv region.. He also had been tortured before he was killed; his body was burned.

Things aren’t quiet in moscovia. A railroad bridge between Sudzha and Sosnovyi Bor on the Lhov-Kievsky — Hotnia line collapsed. Its restoration will take  at least a few days. This is one of the railway lines that transfers troops and resources to the Belhorod region. In addition, there was a big bang at the military depot in the Tomarovka area, Belhorod region. The fuel depot was probably on fire and detonation of ammunition was heard. Again, someone was smoking in the wrong spot. May 1 was truly marked red on the calendar in the regions of moscovia bordering Ukraine.

Today’s Darwin Award goes to the Kharkiv boy (or otherwise) who went to the subway without any documents but with a phone containing pro-occupier pictures. He was greeted there and taken to the right place. It really takes a lack of brains to do something like that.

Thank you to our troops for another day. We believe in the Armed Forces and the Defense Forces of Ukraine! Victory will be ours!